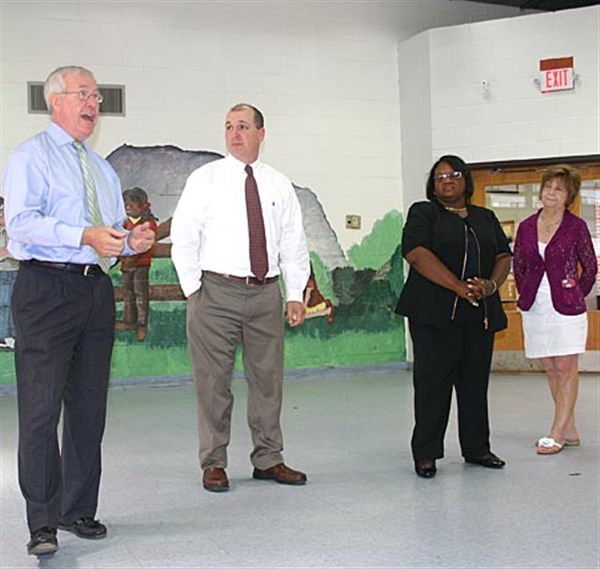 
WATER VALLEY – Monday’s Meet and Greet at Davidson Elementary School (DES) was an informal changing of the guards as the new leadership team was introduced and outgoing principal Dr. Glenn Kitchens was recognized for his interim service.
Kitchens agreed to shift from Water Valley High School’s principal to DES last November, following the death of principal Dr. Carol Gary. Kitchens returned to his former role at the high school last week as a new principal and assistant principal started work Tuesday at DES.
Superintendent Kim Chrestman introduced the school’s new principal, Brad Parker; and assistant principal, Sharron Lipsey Monday morning in the DES cafeteria.
But first Chrestman expressed gratitude to Kitchens for stepping up during a difficult time for the school.
“I put him in an unbelievable position this past year. I don’t know if I have anybody else that could have done what he helped us do as a district,” Chrestman explained.
Chrestman then allowed Kitchens to address the faculty.
“I had a great time and I hope that you all know that,” Kitchens told the group, crediting them for making his job easy.
Kitchens described a year of adversity, starting with the death of Gary last November, along with multiple infrastructural-related problems at the buildings that took away from instructional time.
“I have learned some things that will help me change some things at the high school,” Kitchens said, adding that he had previously worked at an elementary school for a number of years.
“I enjoyed being back for a year,” he said.
Kitchens also said he would have been content to continue as elementary principal.
“The thing that I am ready to do is just be where I am going to be,” Kitchens added.  “It’s an emotional time, but I am going to head back up the hill and we are going to move forward.”

New Administration
Parker comes to DES with five years of administrative experience in the Desoto County School System most recently. He also taught in a number of schools in his career.
Lipsey was an elementary school teacher from 1993-2008. Lipsey worked as an interventionist with Lafayette Upper Elementary until 2013. She also worked for the Mississippi Department of Education as a literacy coach, working in under-performing schools according to Chrestman.
“Both of these people are high quality. They are pretty much like Dr. Gary. They are people of faith and are of strong Christian background,” Chrestman told the faculty Monday.
“I appreciate how much time and effort they put in up front, trying to get things ready to go,” he explained, pointing to the time they have already invested in June before their employment contract started on July 1.
“Mr. Parker brings us a good background in math curriculum,” Chrestman explains, adding that Lipsey brings a strong background in English  and Language Arts reading curriculum.
In brief remarks Monday, both administrators credited a welcoming community as helping make the transition as smooth as possible.
Chrestman also announced that Grace Dickerson will continue to serve as assistant principal at DES, giving the school three administrators.
“You can’t say enough about Grace this year. How much she stepped up, stepped in. Her knowledge base about what happens here and what needs to happen here,” Chrestman said.
Dickerson will also juggle duties as assistant principal alongside serving as district-wide professional development coordinator and testing coordinator.
“You ought to see the new testing calendar this year, it’s phenomenal… it never ends,” Chrestman explained.

Looking Ahead
In closing remarks, Chrestman recounted a familiar statement from Gary.
“She would say, ‘That’s pretty good, but we can do better,’” Chrestman recalled.
Chrestman pointed to quality teachers already employed by the school, the new administrators and the restructuring that comes with third assistant principal that will help the school progress.
“It has never been a work issue here. It has never been a heart issue here,” Chrestman added.