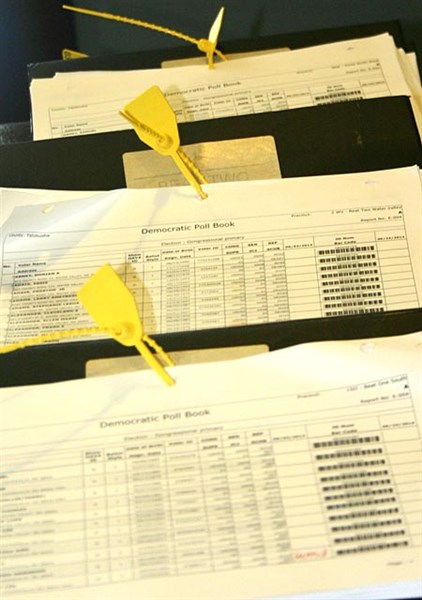 
WATER VALLEY – The embroiled battle in the Republican Party following Senator Thad Cochran’s narrow victory over tea party challenger Chris McDaniel in last Tuesday’s runoff  reached Yalobusha County in the days following the election.
On Monday morning Circuit Clerk Daryl Burney said his office received four public records requests to review the poll books as McDaniel supporters are checking for crossover voting – or voters who voted in the June 3 Primary on the Democratic ballot and switched over and voted on the Republican ballot in the June 24 Primary runoff. Crossover voting is  not allowed in Mississippi.
Statewide Cochran narrowly led McDaniel with 51 percent of the vote, or a reported 6,880 margin according to unofficial election results.
McDaniel supporters have stated they have found more than 1,500 voting irregularities including crossover voting in Hinds County, and indicated that voting records across the state will be checked.
A check of the poll books by a tea party representative on  Monday in Yalobusha County recorded 10 irregularities and four crossover votes in last week’s runoff, according to Burney.
That review was based on a visual inspection, but Burney said the public record’s request could be extended to actual copies of the poll book pages. That review is complicated because the Attorney General’s office has advised circuit clerks across the state that personal information on voters on each poll book must be redacted.
“The public records request could generate between 4,000 and 5,000 pages,” Burney told the Herald. He also explained that each voter’s birthdate will have to be blacked out before the copies are released.
The county’s policy concerning public records allows Burney up to seven days to comply with the public records request and  produce copies of the poll books.
Two additional people claiming ties to the tea party also visually inspected the poll books last Friday.
“We have trained and cross-trained on this so we would not have crossover voting,” Burney said, referring to multiple work sessions with the county’s election commissioners and almost 60 poll workers who worked in 11 precincts across the county.
The four crossover votes in the county came as 1,384 people voted, with Cochran receiving 722 votes, 60 more than McDaniel.
At press-time Tuesday, the county’s election commissioners were working to certify the election results.