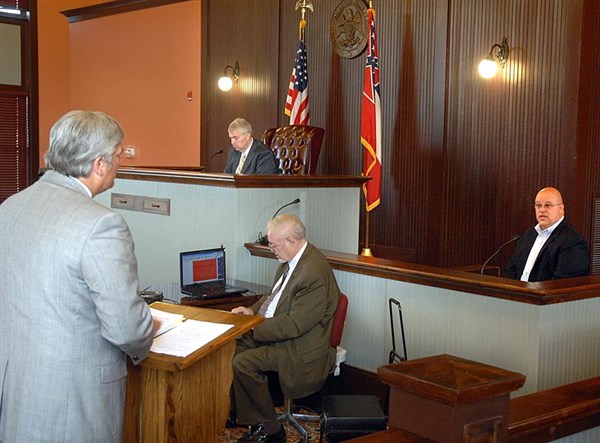 Paul Purnell (left) of the Electric Power Associations of Mississippi questions Kerry L. Davis (right), director of engineering for TVEPA during a brief public hearing Monday at the Water Valley Courthouse. Northern District Public Service Commissioner Brandon Presley (top center and top in photo below) asked Davis if the substation would serve the needs of the general public. He answered that it would. – Photo by Jack Gurner 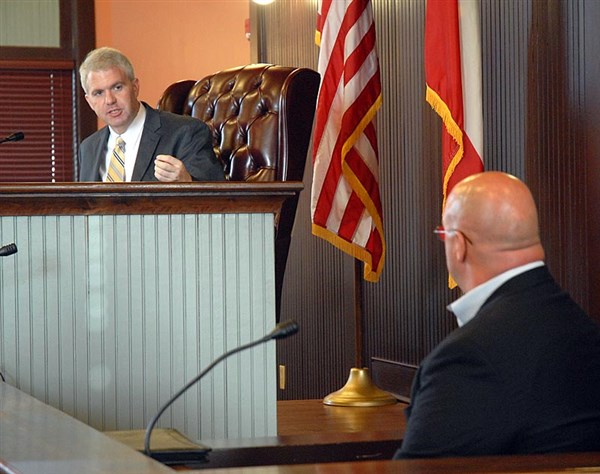 
WATER VALLEY – A new electrical substation to be built in the industrial park is another step closer to reality after a required public hearing Monday night.
Although there were some heavy hitters from Tallahatchie Valley Electric Power Association and the Northern District Public Service Commissioner on hand, only two members of the public showed up. And, they didn’t have any questions or comments.
Commissioner Brandon Presley opened the hearing by explaining that under state law a public hearing must be held anytime an electric power generation or transmission station is built in the state of Mississippi.
In order to build the facility, TVEPA must meet the burden of proof that the facility is needed in this area. “Also the law requires that we approve the estimated construction cost that has been provided by Tallahatchie Valley and that, right now, is $2.7 million,” Presley said.
Paul Purnell, who handles government relations and is counsel for the Electric Power Associations of Mississippi, introduced himself and Bill Wilkerson, attorney for TVEPA. Purnell would question his one and only witness, Kerry L. Davis, director of engineering for TVEPA, a position he has held for the last 10 of his 22 years with the association.
Purnell testified that the substation would provide additional availability of power in the northern part of Yalobusha County. He noted that the location is about seven-tenths of a mile southwest of the Hwy. 7 bypass and Hwy. 32 intersection at the end of Industrial Park Drive.
Commissioner Presley asked Davis if the substation would serve the general public and not just one specific industry. Davis answered that it would improve the efficiency and reliability of the system for all users and not a specific industry.
Having the substation located in the industrial park will be an asset as it encourages potential industries.
Davis said construction could begin in early August.
Water Valley aldermen approved the original agreement to construct the substation at their regular meeting  in November of last year. Mayor Larry Hart said that the substation would be an asset to the city because TVEPA was offering an opportunity to back feed the city’s electrical system in the event of a breakdown.
The mayor noted that the cost of receiving emergency power from the substation would be no more than the normal wholesale rate charged by TVA. But, the city will have to purchase transformers and install them on a concrete pad in a fenced area at a cost of between $175,000 and $200,000.
TVEPA will supply the engineering, project management and expertise, said Hart.