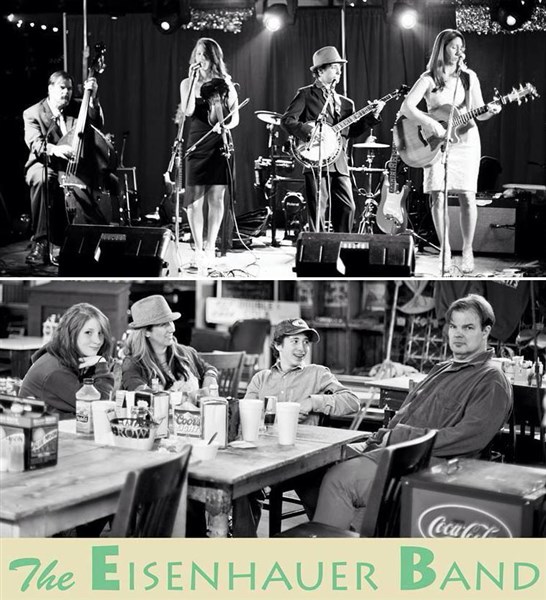 The Eisenhauer Band includes three members of the family, Rhonda, Andy and Amelia Eisenhauer along with Bryan Ward of Water Valley.

On Thursday, July 31, Water Valley Town and Country Garden Club will sponsor the 21st Watermelon Carnival Music Festival at the Water Valley Civic Auditorium under the direction of Zandra Walker and Jonnie Mayo.
The featured artists for the show will be the Eisenhauer Band. The group is composed of Rhonda Eisenhauer, her 13-year old son, Andy; her 14 year-old daughter, Amelia and producer Bryan Ward.
The Eisenhauer family, originally natives of southern Illinois, relocated to the Music City in August, 2012, to seek their fortures in the music industry.
Ward, a veteran musician, published songwriter, and founding member of the 90s group, BonePony; was a 10-year resident of Nashville before settling in Water Valley in 2007.  In addition to performing, writing and touring with the Eisenhauer Band, he is a producer/ recording engineer for The Tone Room in Oxford.
The Americana/Blue-grass/Delta Blues group met in 2013 through a mutual friend while seeking out a producer and recording studio to create their first album, released earlier this month. After several months of recording a unique chemistry became obvious and producer Ward was asked to join the band.
Their debut album, titled Under The Influence, is an eclectic, multi-genere contemplation record featuring covers of legendary artists The Beatles, The Rolling Stones, Led Zeppelin, Tracy Chapman, Dolly Parton, Emmylou Harris, Nina Simone and Concrete Blonde.
The Eisenhauer Band has also become the flagship act for Water Valley’s own record label, Jam Shack.
Pre-show music begins at 6:30 and the main event kicks off at 7 p.m.  Tickets may be purchased at Turnage Drug Store, Chamber of Commerce office, or from garden club members.
This marks the first appearance for the Eisenhauer Band at the Watermelon Carnival, and in addition to performing at the Thursday night commencement program, they will as well headline the annual Friday Night Street Dance in the Park (see story below).
Exciting Lineup Of Musicians Will Perform In Water Valley


WATER VALLEY – Mark your calendars for several exciting events featuring talented musicians performing in town later this month and during the Watermelon Carnival.
The action starts Friday, July 25, in the upstairs room of the B.T.C. Old Fashioned Grocery Store with Chance Moore, local favorite Jacob King and former American Idol contestant Priscilla Bar-ker taking the stage.
Each musician will play about a half-dozen numbers, mixed originals and covers.
“Chance will be there to support his soon-to-be-released record, ‘A Country Boy Like Me,’” reports Bryan Ward.
Ward is coordinating the events and is producer at the Tone Room in Oxford where Moore’s record was recorded. King, a local singer, is also working on his first record at The Tone Room.
“Priscilla was on American Idol this past season, she made it to California for the last week,” Ward added.
Joining the three musicians on the stage will be Ward, Daryl Burney on bass, along with the Thacker Mountain Radio guys Mark Yacovone on piano and accordion and Wallis Lester on drums.
The action is scheduled from 7 to 9 p.m. and the cover charge is $5.
The action continues the next Thursday night, July 31, with the Eisenhauer Band taking the stage at the annual Watermelon Carnival Music Festival (see story above).
The third gig is Friday night, August 1, when the Eisenhauer Band will have a record release party for “Under The Influence” during the annual Watermelon Carnival Street Dance sponsored by Renasant Bank.
During the first half of the Street Dance King, Barker and Moore will take the stage with the same crew from a week earlier – Ward, Burney, Yacovone and Lester – and Amelia Eisenhauer.
Following the fireworks show, the Eisenhauer band set will play for an hour and a half.
Ward said the performance at the Street Dance is part of the Eisenhauer Band’s week-long record release schedule that includes performances in multiple states.
Ward also said the band has been the catalyst for resurrection of the Water Valley record label, Jam Shack.
“Steve Thompson and Jam Shack are back in the picture,” he said.
Ward explained that Jam Shack is funding and putting on both of the records for the Eisenhauer Band – Under the Influence, and a second record currently under production, Fortune Cookie.
“There are lots of cool things going on as a result of this one band,” Ward told the Herald.