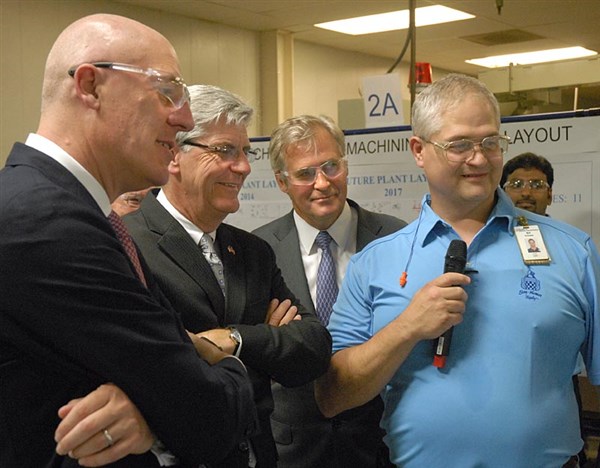 BorgWarner’s President and CEO James R. Verrier (left) tours the local plant with Governor Phil Bryant and BorgWarner’s General Manager Robin Kendrick (second from right) following a press conference Monday afternoon. In the conference, Byrant and company officials reported the company will invest $43 million for the expansion which will provide 158 new jobs to the plant. BorgWarner worker Bill Grillette (right) was among local employees who hosted the plant tour. – Photo by Jack Gurner


WATER VALLEY — Gov. Phil Bryant and officials from global powertrain supplier BorgWarner announced Monday that the company is expanding operations at the north Mississippi plant.
The $43 million project is the company’s fourth expansion in Water Valley in just the past five years and will create 158 new jobs.
During the joint announcement Monday afternoon at BorgWarner, Gov. Bryant said that some are surprised that some of the most advanced systems for the automobile industry in America are being produced right here in Yalobusha County.
“Today’s announcement is a result of an increased demand for BorgWarner’s advanced transmission solutions,” the governor said, putting emphasis on the word advanced.
Bryant noted that the products manufactured in Water Valley are helping North American automobile manufacturers improve fuel economy. This includes increased production of the company’s Eco-Launch™ solenoid valve, which helps deliver improved fuel economy and performance at a significantly lower cost than alternative systems.
“It supports the economy by burning less fuel,” he explained.
The governor called the 158 new positions being created as generational jobs. “We believe that these are jobs in which your children and their children will have an opportunity to come to work here at BorgWarner.”
“We say economic development is a team sport,” Gov. Bryant continued, praising the work of the Mississippi Development Authority team in Jackson.
“But,” he added, “If you are going to have the necessary funding for the investments in economic development, you must have the legislature. And the legislature has stepped up each time we have called on them.”
According to the reports from the Associated Press, MDA will provide $2.5 million to help with infrastructure needs, along with $200,000 for one-time expenses.
The governor named other members of the economic development “team” including the Appalachian Regional Commission, Ten-nessee Valley Authority, the mayors, boards of aldermen, county supervisors and economic development regions.
“All of us work together…our senators and our congressional members. This is a team sport and the reason we have been successful is because we work as a team.”
Continuing the sports metaphor, Gov. Bryant said he has to compete in the SEC when looking for companies like BorgWarner that will continue to grow and expand. “I have to take on Texas and Alabama and Florida and Tennessee and South Carolina. The southern automobile corridor are all competing for these wonderful companies and these investments.
“We win our share of the games because of the players we have on the field,” he added, referring to the number of companies that have made Mississippi home because of the economic development team.

Quality Employees
The governor also praised the workers of Mississippi as being an important part of the economic development team. “They are the best in the world. I know that you would expect that I would say that. But, don’t believe me. You can ask Mr. Toyoto; you can ask the leadership at Nissan why they came to Mississippi. They will tell you it is the workforce.”
“We believe this company should grow, should make a profit, should hire more people, should expand, should return money to their investors,” Gov. Bryant said of BorgWarner. “That’s the American way.”
“And, in Mississippi we still work hard to make sure that we help our companies achieve,” he said. “I’ll be back each time we have an expansion. Thank you so much for believing in us.”
After Gov. Bryant completed his comments, Yalobusha County Economic Development and Tourism Director Bob Tyler, acting as master of ceremonies, introduced Water Valley Mayor Larry Hart who officially welcomed the governor, MDA officials and Borg-Warner executives to Water Valley.
“BorgWarner is a part of our community, fed a lot of people over the years and we look forward to the future with them,” Mayor Hart said.
Following the mayor, Yalobusha County Board of Supervisors President Tommy Vaughn said that he is glad to see the governor and MDA coming to town. “It’s a pleasure when we see both of you coming. It’s good news and this is absolutely excellent news.”
Next, BorgWarner’s President and General Manager Robin Kendrick spoke and presented commemorative plaques to Gov. Bryant, Mayor Hart, Board President Vaughn and Earl Gibson, president of the Yalobusha County Economic Development District. Kendrick then introduced James R. Verrier, President and CEO, BorgWarner Inc.
Verrier spoke of his long association with the Water Valley plant, which began in 1996. He remembered his friend, Travis Clement, who passed away recently. “When I walked into the building today, I have to tell you I took a moment to reflect on all the goodness of Travis and what he taught me as a young man 18-years ago.”
He thanked everyone who got BorgWarner to where it is today and recognized the employees of the Water Valley plant. “Every hour of every day they are out there making great product. With-out them we are nothing and I’ll never forget that.”
The activities concluded with a tour of the plant conducted by BorgWarner employees.