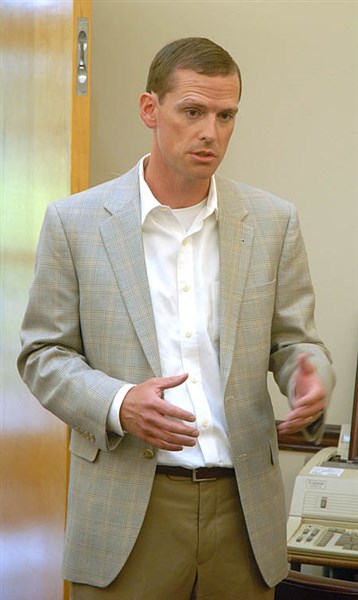 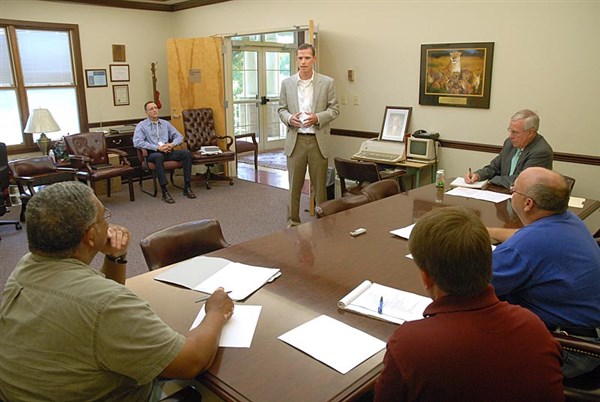 
WATER VALLEY – The school district could recover over $4 million in past due MAEP funds if trustees choose to join a lawsuit against the Mississippi Legislature.
Casey Lott, attorney for the Booneville School District, appeared before the school board Monday night to explain the Mississippi Adequate Education Program (MAEP) funding lawsuit. Lott said that he was there in place of former Governor Ronnie Musgrove, who originally set the appearance.
Lott added that there are only five attorneys on the legal team put together by Musgrove and five meetings to attend at one time, so he was assigned the WVSD.
He said that the gist of the lawsuit is that, according to the statute, the Legislature is required and has been required to fully fund MAEP since 2010. “As the statute reads in its current state, it says the legislature shall – shall being the operative word – fully fund education in accordance with the following formula. The statute has not always read that way.”
Lott went into detail about the battles between former Governor Haley Barbour and the Democrats in the Legislature in 2007 over education funding. A compromise deal was struck that phased in full funding by 2010.
According to Lott, full funding didn’t occur in 2010, 2011, 2012 or last year, when it was $250 million short despite having $400 million for the rainy day fund.
“So, we are gathering a group of school districts to file suit. We’ll seek what is called a declaratory judgment in Hinds County Chancery Court declaring that the Legislature owes these past due funds, which total about $1.5 billion to all the school districts combined,” he said. “Water Valley’s portion of that money is over $4.1 million.”
Lott noted that the attorneys think it is important to get the suit filed quickly before the Legislature changes the law to make what they did legally correct. “We feel that it is important to get a judgment before the next Legislative session because all they have to do is change the law and no one has any right to recover. All they have to do is change one word, shall, to may.”
He added that the attorneys believe if they file by Aug. 1 they can get a judgment by the end of the year – before the Legislative session begins in January. “We are trying to get as many school districts as we can to participate in the lawsuit, which is why I am here tonight.”
Trustee Pierce Epes asked if Legislators could call a special session to change the law. Lott said that they could, but weren’t expected to do so because it would be costly and they might not have the votes to pass it.
Lott said that a number of systems had signed on to the suit – about 20 with another 10 commitments. But, he added that some have refused to join in the suit because of potential backlash. “All you are doing is roughly what the Better Schools, Better Jobs Constitutional Amendment is trying to do. You are trying to require full funding from this day forward. But, what the Constitutional Amendment doesn’t do is do anything about the past-due funds.”
Because Mississippi law doesn’t provide for class action lawsuits, only districts that file would receive relief if the judge agrees with the legal theory.
Some schools were concerned that law makers might cut funds to schools if they participated in the suit, according to the attorney. “They haven’t fully funded you since 2010.”
Along with putting money into the $400 million rainy day fund, Lott said that Legislators were giving existing businesses – not new businesses they were trying to attract to the state – $100 million in tax cuts. “They have the money to fully fund.”
Board attorney Trent Howell asked some technical questions about the lawsuit and next Superinten-dent Kim Chrestman asked if winning the suit would put a financial burden on the state.
Lott answered that if it is negotiated in the right way, he didn’t think it would.
After some additional discussion, Board President Lamar Burgess asked if there were any additional questions. There being none, he said that he would like to have the full board on hand to make the decision. Only he, Epes and Taylor Trusty were present Monday night.
Former Governor Musgrove said during an appearance before the Meridian Public School District Board of Trustees in mid-June that if the case did not succeed and his legal theory was wrong, there will be no cost to the school districts involved.
“The ramifications are minute,” said Musgrove. “What are they going to do, underfund more?”