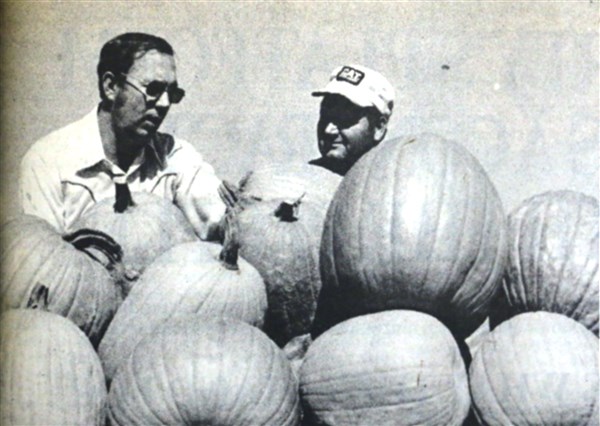 Yalobusha farmers marketed approximately 130,000 pumpkins for the Halloween trade in 1976. County agent Doyle Varner (left) checked out a load of pumpkins headed to market with Boyd Hughes, a producer.

Two photos, one on the front page, featured Halloween decorations at the home of Christine Harrison on Blount St. The photographer was Joe Gurner.

The Blue Devils earned a post-season bid by defeating the North Panola Cougars 34-6. Ronnie Ferrell and Antonio Hoskins were pictured making tackles during the game.

Larry Carr, a former Water Valley High School administrator, visited Davidson Elementary to give a demonstration on bee keeping for the students.

The Water Valley High School Band participated in the District Marching Festival in Tupelo and earned an Excellent plus rating. The Guard Unit and Percussion Corps earned Superior ratings.

“Buster” Potts was selected as BorgWarner’s “Employee of the Month.”

Morris Woods was given a surprise party on his 84th birthday, hosted by his children and grands. Many other relatives and friends attended.

A vote counting tabulator was being tested in the county.

The hopes for a district title were diminished as the Bruce Trojans defeated the Blue Devils, 12-8, Friday night, even though the locals led in total yardage four to one.

J. C. Womble, Jaycee Publicity Chairman, announced that the organization would host their haunted house on October 29, 30, and 31.

40 Years—October 28, 1976 – Lambert Lane of Forest, a fifth year student in the University of Mississippi’s School of Pharmacy, will serve an internship at Turnage Drug Store.

Lona Foster of Water Valley, 72 years old, was dazed in an automobile crash but was reported in good condition after a 24-hour stay in the woods. Also in the accident was her son, who was knocked out and did not realize his mother was missing for a time.

The Water Valley Blue Devils hosted the Independence Wildcats Friday night. After playing three close quarters, the Wildcats opened up a scoring sprees in the fourth to defeat the Blue Devils, 35-7.

The Cub Scouts and the Boy Scouts were inviting boys, ages 8-17, to join their organizations.

50 Years—October 27, 1966 – The largest baby to be born in Yalobusha General Hospital, to date, was a son of Joe Willie and Invie Ree Bailey of Water Valley. A natural birth, the young man weighed 14 pounds and 10 ounces. He was delivered by Dr. D. E. Spears.

The Water Valley Blue Devils and the Senatobia Warriors are tied for second place in the Chickasaw Conference. Olive Branch is currently in first place. To gain the second place tie, the Blue Devils showed some offensive power as they defeated East Tallahatchie, 40-7, avenging last year’s one touchdown loss.

Rev. J. A. Fondren, pastor of Second Baptist Church, is on a mission trip in Arizona.

A Harvest Festival will be held at Camp Ground School.

The Water Valley School’s PTA sponsored Halloween Carnival has been cancelled because it conflicted with church services. “At a later date we will have a Community Night for the children,” stated Mrs. Kyle Skinner, PTA president.

The Water Valley Blue Devils ended the season with a 34-7 victory over Olive Branch for a third place slot in the Chickasaw Conference.

70–Years—October 31, 1946 – Dr. John D. Williams was installed as Chancellor of the University of Mississippi.

The electric department shows gains in the city over the past year. According to a report though, there has been limited construction, rehabilitation work, and service to customers because of the shortage of materials.

The Illinois Central Railroad will pay tribute to the war dead among its employees in a ceremony on November 5.

Leon Roundtree, manager of the Grand Theatre, will celebrate his birthday with a mammoth picture show party. Every school child in the area is invited to attend this gala affair at which “Three Wise Fools,” staring Margaret O’Brian, will be shown.

A 110-acre farm, with a five room house, two barns, with 50 acres in cultivation, and the rest in fenced pastures and timber, was for sale for $3,500.

In the “Hospital News” it was reported that Mrs. Robert Buford of Shelby underwent a major operation in the Water Valley Hospital, and Jean Boatright of Water Valley was receiving treatment.