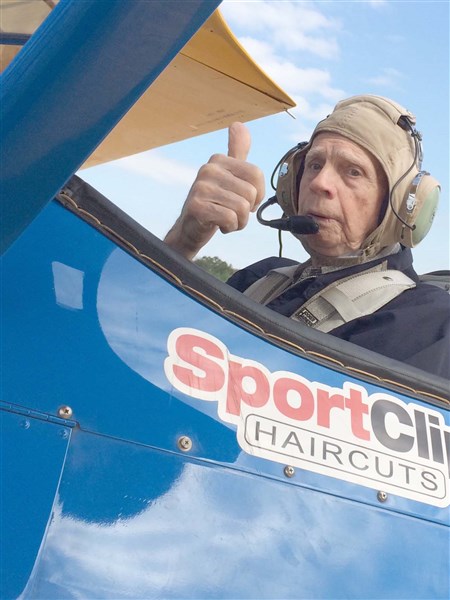 World War II veteran Ernie Aune was among six veterans who were honored with a flight sponsored by Ageless Aviation Dreams Foundation on Oct. 26.

Ernie was an air traffic controller during World War II, serving at Keesler Field Biloxi, then in Louisiana, and later in Alaska. Ernie, a native of Water Valley and long-time employee of Mechanics Bank, retired as president of that institution a few years ago. Earlier this year he gave up his home in the Valley and went to live in Brookdale.

The Ageless Aviation Dreams Foundation is a non-profit organization established and dedicated to honoring seniors and U.S. military veterans with a primary focus on serving individuals who reside in long-term care community. The foundation’s mission is to “Give Back To Those Who Have Given.”

Through donors, the foundation provides Dream Flights in a Boeing Stearman biplane, the same aircraft used to train many military aviators in the 1940s. The organization was started by Darryl Fisher, who has been using a biplane from 1940 that his father, Bill Fisher of Salem, Ore., owned. Bill reported that the plane belonged to his father who had it restored in Cleveland, Miss. in 1946. The first flight of Ageless Aviation Dreams Foundation was made in Oxford in 2011, and among the six flights on October 26, 2016, was the 2000th flight. The organization thought it fitting for this millstone flight to take place in Oxford.

Ernie and his son, David, who was born while his father was stationed in Alaska, were in to tell the Herald staff about this flight.

“It was so much fun and brought back so many memories,” the elder Aune reported.