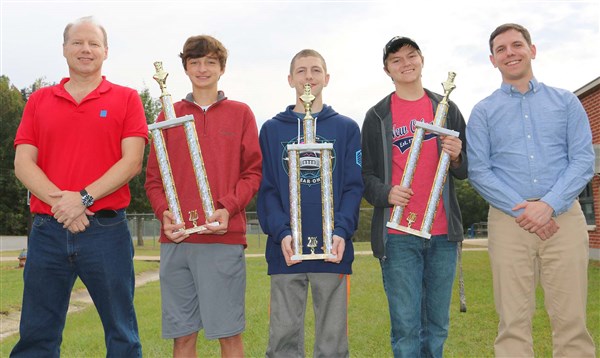 WATER VALLEY – The cries for state champions from the populace is evoked often.  The Water Valley High School chess team would like to direct the readers’ gaze toward the edifice on 550 Market Street. It is there that, not one, not two, but three state champions reside. The Mississippi Scholastic Chess Association Grade Level Championships were held Saturday, November 5, at Davidson Elementary School and Water Valley High School walked away with three state championship titles.

The team left in their wake the wailings and gnashing of teeth of their opposition echoing through the halls of the elementary school; it is quite possible those anguished cries still reverberate through the buildings.  The lamentations of the defeated augmented the roar of elation that these young men and their shiny new hardware brought to our town. Victories were hard fought and won and state championship titles were earned, once again.

John Bennett Stevens, sophomore at WVHS, repeated his State Champion title.  He was last year’s ninth grade champion and now lays claim to the tenth grade state champion title.  Matthew Dunn, last year’s seventh grade champion, is now the eighth grade champion.  To add to chess coach John Person’s coterie of chess champions is the newest titan, Hayden Eubanks, a seventh grader at WVHS.  These three young titans providing a trifecta of triumph for our tiny town.  Citizens of Water Valley, bask in the championship titles that these young men have brought to this province.  They bring the baubles of excellence that the people of Water Valley yearn for; they are state champions.

Over a dozen schools and with eighty-one players signed up and they all came to test their mettle on the rank and file.  The trophies where presented by National Master Alexander King.  Mr. King works for the Center for Math and Science Education (CMSE) at the University of Mississippi.  Currently the CMSE is seeking to expand scholastic and collegiate chess in Mississippi or order to improve achievement in math and science.  Many of the players were fortunate to have him go over their games for critique and edification.  The tournament benefited from Mr. King’s attendance and wisdom – to have a National Master review your games is a rewarding experience in of itself.