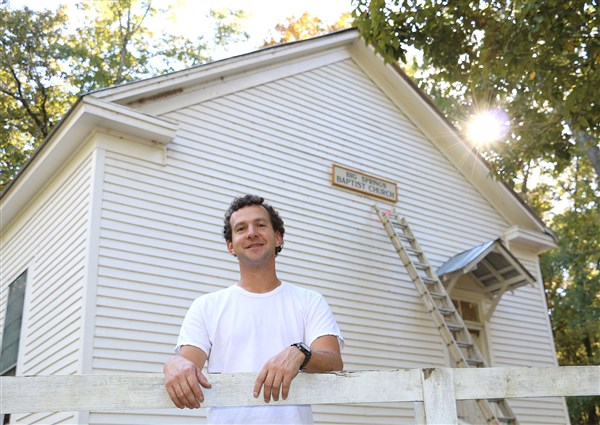 Lloyd Caulfield has recently completed the renovation of Big Springs Baptist Church and plans to offer the building for weddings and other events. The restoration is part of Caulfield’s vision to restore his late grandfather’s farm located in the Sylva Rena community.

SYLVA RENA – There’s a revival underway at Big Springs Baptist Church in the Sylva Rena community – Lloyd Caulfield is on the downhill side of a three-year project to restore the 100-plus year-old church building that is part of his late grandfather’s farm.  The work was christened with the official sign hanging in October, followed by the first wedding in the building Caulfield plans to rent as new venue for weddings, family gatherings and other events.

“People have called my family for years wanting to get married in that church,” Caulfield explained about a project that has tugged on his heart for almost a decade and ultimately lured him back to his hometown after working around the country.

Caulfield has invested a lot of sweat equity, along with the help of several local contractors, to restore the building to its original appearance while working to make it functional. He has reclaimed the hardwood floors that had been covered over, put plenty of fresh paint inside and out, installed a new roof and added a new septic tank. The restoration also included foundation repairs, electrical work and other details too lengthy to list.

Services in the church, located on County Road 18, petered out in the early 1980s and Colonel Lloyd White, Caulfield’s grandfather, purchased the vacant building that was adjacent to his farm acreage. Restoring the church is just part of Caulfield’s vision, his dream is to restore his grandfather’s farm to the condition it was when he was a child.  Caulfield remembers the meticulous farm when Colonel White was living – the orchards, landscaped pastures, carefully pruned crepe myrtles lining the road and beautiful Magnolia trees that dotted the landscape.

“My grandfather even had the trees limbed up, everything was clean and mowed, it was beautiful.”

As time and money has permitted, Caulfield has worked on the church and farm with a long-range vision to create an agri-tourism business that would incorporate the church building for weddings and other events, as he works to restore the farm to it’s original grandeur. His hope is that the entire operation become a venue for company and church picnics, family reunions, birthdays and just about everything else you can imagine.

His early memories of the farm also include playground equipment – a merry-go-round and slides – his grandfather acquired.

“When I was a kid, we used to have the best birthday parties out there. I would like to bring the farm back for birthday parties along with more attractions, maybe a petting zoo and pony rides,” he explains. “A lot of people around have different memories about the farm,” Caulfield said.

He envisions an operation that could be similar to the Fiddlin Rooster farm, an agritainment business that operated for several years on Hwy. 32,, just east of town, before closing in 2015.

Caulfield attributes his early memories of the farm, and watching it deteriorate as the driving force that brought him back home to Water Valley.

That’s why I came back,” Caulfield explained.  “I was complaining about the way it looked, but again I wasn’t doing anything to help take care of it either,” he added.

Caulfield had been gone 13 years when he moved back to the Valley in 2015. He spent two years in Vermont, five years in Colorado working for the National Park Service in Colorado. He came back to Water Valley in 2010, and left again to attend nursing school in Hot Springs, Ark. He completed nursing school in 2013 and stayed in Arkansas for a couple years working, but whenever he had free time he would come home to work on the farm.

Last year Caulfield took a job at Yalobusha Health Services and he spends most of his free time at the farm.

“I have such a long list out there of expensive projects out there, it doesn’t ever end,” he added.