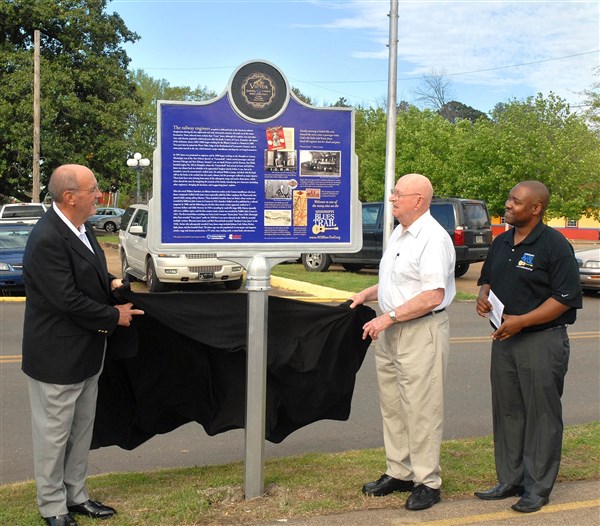 The Mississippi Blues Trail was created by the Mississippi Blues Commission in 2006 to place interpretive markers at the most notable historical sites related to the birth, growth and influence of the blues throughout and beyond the state of Mississippi. In 2012, a marker was unveiled by Water Valley Mayor Larry Hart and Casey Jones Museum Curator Jack Gurner, Sr. honoring legendary railroad engineer Casey Jones and the song that made him famous.

“The Mississippi Blues Trail Program not only celebrates and immortalizes the state’s vast contributions to the music world, but also draws so many to our state who are yearning for an authentic experience,” said Gov. Bryant. “I am elated to celebrate 10 years-worth of Blues Trail markers educating and engaging visitors and locals alike.”

The Mississippi Blues Trail was created by the Mississippi Blues Commis-sion in 2006 to place interpretive markers at the most notable historical sites related to the birth, growth and influence of the blues throughout and beyond the state of Mississippi. So far, there are 178 in-state, 13 out-of-state and three international blues trail markers.

“As the Birthplace of America’s Music, Missis-sippi’s unique musical heritage is preserved and celebrated through the Blues Trail Program, which is a path people from around the world have taken and will continue to take to experience the state’s musical magic” said MDA Executive Director Glenn McCullough, Jr. “We look forward to welcoming more guests as we celebrate Mississippi’s rich musical heritage.”

The program’s first marker was unveiled Dec. 11, 2006, in Holly Ridge, Miss., to honor Charley Patton, a dominant figure in the pioneering era of Delta blues.

Almost six years later, on March 23, 2012, the program’s 151st marker was unveiled in Water Valley honoring legendary railroad engineer Casey Jones and the song that made him famous. Jones died when his Illinois Central train, the “Cannonball,” collided with a stalled freight train in Vaughan

Jones, who once lived and worked in the railroad town of Water Valley, was credited with saving the lives of his passengers and crew, and was immortalized in song by many artists, including Mississippi-born bluesmen Furry Lewis and Mississippi John Hurt.

Within the state, the trail extends from the Gulf Coast north along several highways to Natchez, Vicksburg, Jackson, Leland, Green-wood, Clarksdale, Tunica, Grenada, Oxford, Columbus, Meridian and many other points. The largest concentration of markers is in the Mississippi Delta.