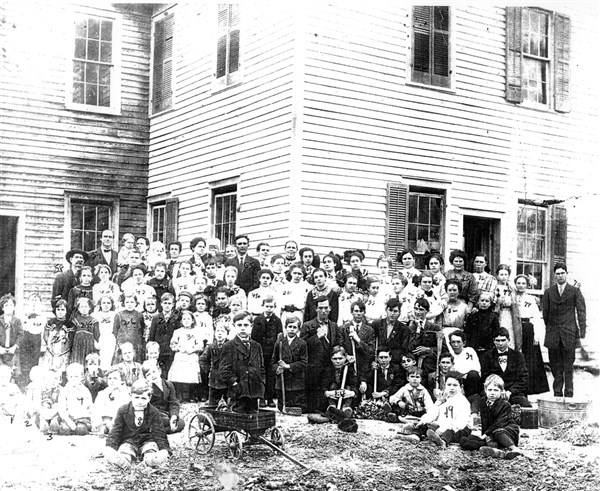 Students stand in front of Sylva Rena School around 1912. Many of the students were carrying sticks, apparently with stick ball on the agenda that day. The school burned in 1938, and the students were absorbed into the faculties of the Water Valley Schools when they consolidated that same year.

The City of Water Valley was considering the possibility of raising water, sewage and garbage collection rates.

A history of the Boy Scouts in Water Valley is being compiled by long time Scouter, Jack Gurner, Sr., in honor of the city observing its 70th Anniversary of Scouting.

The Clifton Smiths have been awarded the honor of  “Yard of the Month” by The Garden Club of Water Valley.

Featured in the Gurner Photography ad this week is three-year-old Lauren Tyler, daughter of Julie and Cam Tyler. She is swinging on an ivy draped swing and the photo captions is: “I’m thinking of the coming of spring.”

30 Years—January 15, 1987 – Sheila Spence, daughter of Mr. and Mrs. James Spence, was on the president’s list at Blue Mountain College for the first semester.

Sheriff Lloyd Defer was urging Yalobusha County citizens to support the Boy’s and Girl’s Ranch, a charity of the Mississippi Sheriffs’ Association.

Mr. and Mrs. J. P. Hart were honored with a reception, hosted by their children, on their golden wedding anniversary.

Mr. and Mrs. Mathis Morgan were honored with a surprise celebration on their 60th wedding anniversary by their seven children.

40 Years—January 13, 1977 – Anthony Steele and Mary Beth Knight, both members of the Water Valley High School junior class and officers of the high school band, have been selected to participate in the University of Mississippi New Materials Clinic to be held in February.

The new Tallahatchie Valley Electric Power Association Manager, W. H. Saxton, stated that the new rates should cause only a slight increase in bills.

Bluford McCullar, manager of the Water Valley Area Chamber of Commerce, died in Yalobusha General Hospital on January 8, where he had been a patient for two days.

Addressing members of the Water Valley PTA at their first meeting of the year were representatives from Mississippi Educational TV.

50 Years—January 12, 1967 – William Winter, treasurer of the state, announces plans to run for governor of Mississippi. Mr. Winter is a nephew of Mrs. Ruby Smith of Water Valley.

Senator Walter Moore of Oakland has been named to chair a special interim legislative committee studying Mississippi’s Milk Commission and the high cost of  milk in the state.

A day’s kill for a group of Water Valley hunters, hunting with nine beagles owned by Horace Upchurch, was 21 rabbits and one bobcat. Hunting with Upchurch were Earl Neal, Alton Blaker, Gene Upchurch and Milton Coleman.

It was reported that the Blue Devil basketball team was still hot, with a record of 13-2. High scorers were Tommy Hudson, Johnny Craven, Wayland Hill, Abe Morris and Charles Green.

Approximately 250 Explorer Boy Scouts will be thrilled to get an hour flight in a C130. The flight is being hosted by the U.S. Air Force and the Yocona Area Boy Scout Council.

60 Years—January 16, 1957 – Laura Jo Burns, daughter of Mr. and Mrs. J. C. “Jake” Burns of Water Valley, was selected to reign as “Miss Northwest Junior College.” She was also named “Most Beautiful” in the Who’s Who Contest.

The “human Blimp” will be on exhibition in Water Valley Saturday in front of the Main Street Band Stand. A former wrestler and a life-long athlete, the man weighs 763 pounds and is reported to be the world’s largest person.

A new gas franchise being negotiated with United Gas Corporation would require the company to pay two percent of the gross revenue of sales to the city.

70–Years—January 9, 1947 – W. E. Blackmur announced at a meeting of the Rotary Club that he would give prizes, totaling $150, to the farm boys and girls making the best all around records during 1947.

In a sweet potato growing contest in the State of Mississippi a 14-year-old boy from Jones County took first place with a net of $583.30 per acre. Second place winner was Edward McMinn from Yalobusha County and also among the winners was Bill McMinn also of Yalobusha County.

Parker’s Ben Franklin was having a big sale on the occasion of their 10 anniversary in Water Valley. One of the sale items was No. 2 & 3 wash tubs advertised for $1.65 up.

Many farmers in the Yalobusha County Soil Conservation District were expected to  plant Kudzu by the new “furrow method.”