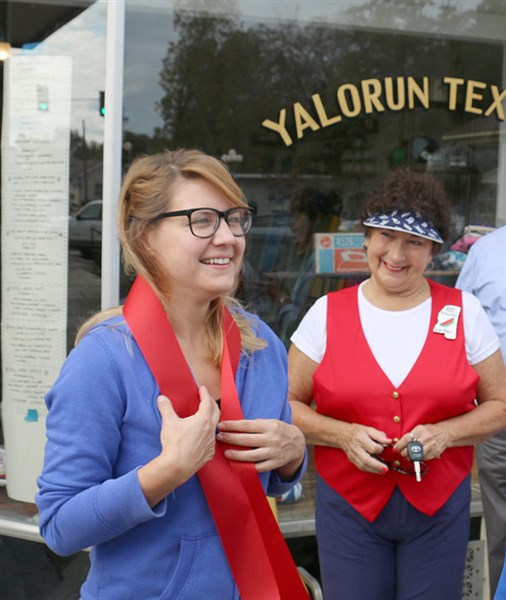 Coulter Fussell opened Yalorun Textiles in 2015 on Main Street in Water Valley as a back-to-basics quilt shop/experimental textile workshop. Fussel’s quilt work (example below) recently earned her a state fellowship award in the inaugural Southern Prize and State Fellowships, selected by South Arts in their nine-state region. An artist from each of the nine states was selected and are now in the running for a $25,000 Southern Prize. The winner will be announced on April 24.

ATLANTA – As part of the inaugural Southern Prize and State Fellowships, South Arts has selected nine visual artists from the region to each receive a State Fellowship award of $5,000. The nine artists – Pete Schulte of Alabama, Noelle Mason of Florida, Masud Olufani of Georgia, Becky Alley of Kentucky, Joey Slaughter of Louisiana, Coulter Fussell of Mississippi, Stephanie J. Woods of North Carolina, Herb Parker of South Carolina, and Georgann DeMille of Tennessee – are now in consideration for the Southern Prize awards: the $25,000 Southern Prize and a two-week residency at the Hambidge Center for the Creative Arts and Sciences, or the $10,000 Finalist Prize. The State Fellowship awards will be recognized and the winners of the Southern Prize will be announced at a ceremony on April 24 in Atlanta.

The South Arts Southern Prize and State Fellowships acknowledge, support and celebrate the highest quality artistic work being created in the American South. From January through March 2017, over 850 visual artists submitted work for consideration, and a panel of jurors reviewed each application with the sole criterion of artistic excellence to determine the nine State Fellows. A second panel of jurors is currently reviewing the State Fellows to determine the two Southern Prize awardees.

“There is a deep well of artistic talent throughout our region,” said Susie Surkamer, executive director of South Arts.

Visual artists living in South Arts’ nine-state region and producing crafts, drawing, experimental, painting, photography, sculpture, and mixed media work were eligible to apply. The awards will be presented to the artists as unrestricted funds.

“The Southern Prize and State Fellowships will impact the careers of artists in our region,” continued Surkamer. “These fellowships and awards are part of the support system allowing artists in the South to make a living in our region.”