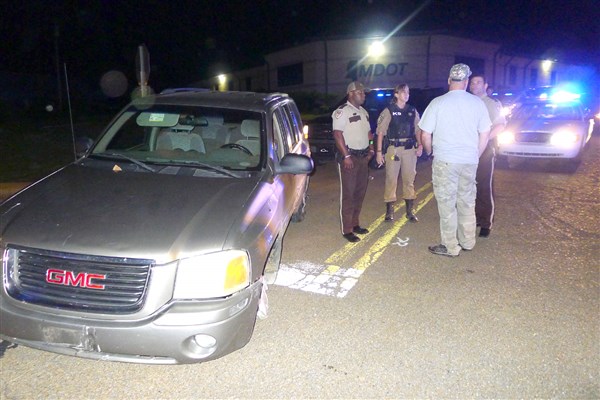 Officers, standing down after the bizarre, high-speed chase that led them back and forth through Batesville, examine the vehicle whose driver kept going on tires shredded by stop sticks thrown into his path to slow or disable the vehicle. When they finally got him stopped, he was arrested without further incident. He sat meekly in a patrol car when this photo was made. The chase started on Pope-Water Valley Road around 2 a.m. – Photo by John Howell 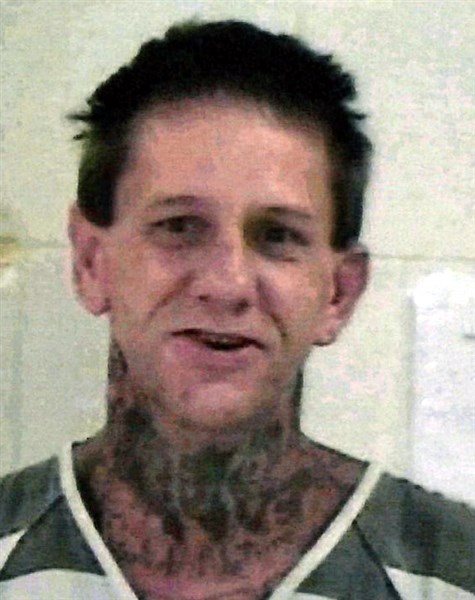 And he ain’t wearin’ no clothes!

Oh, yes; they call him The Streak!

BATESVILLE Panola County deputies may have rediscovered The Streak early Wednesday when they spotted a naked man entering a parked SUV who then streaked away to avoid capture, leading officers on a chase at high speeds zig-zagging through Batesville with up to 15 law enforcement vehicles eventually joining in.

When they finally got him cornered and stopped in front of the Mississippi Department of Transpor-tation office on Highway 51, all of the SUV’s tires were shredded. The driver was placed in the back of a patrol car, still naked.

“We pulled into the church parking lot to check on the vehicle and noticed a white male not wearing any clothes getting into the driver’s side of the vehicle,” Williams states in his report. The vehicle sped off as the officers walked toward the vehicle, headed east on the Pope-Water Valley Road, running the stop sign at its intersection with Highway 315 as it turned north on Highway 315.

“The subject was traveling approximately 60-65 mph on Highway 315 … threw several unknown items from the vehicle … swerving back and forth across the center of the roadway,” Williams continues

When the fleeing vehicle reached Highway 6, the driver headed west toward Batesville. Panola deputies joined the chase towards Batesville where a Batesville police officer prepared to deploy “stop sticks” to slow or disable the SUV.

About that time, Mitchell Hopper of Oakland and his girlfriend were headed east on Highway 6 and saw the BPD officer waiting near the House-Carlson Drive/Hwy. 6 intersection as the speeding blue-lighted caravan raced toward town.

“We heard a ‘pop’ like a muzzleloader,” Hopper said, as the spikes apparently made contact with at least one of the SUV’s tires.

“We were joined by several units from Batesville PD, Panola County Task Force, Batesville Task Force and Mississippi Bureau of Narcotics,” Deputy Williams’ statement continues. “During several attempts to box the subject’s vehicle in he swerved at the marked police units in an effort to damage their vehicles.”

The driver turned north on Highway 51 with law enforcement vehicles in pursuit, reaching speeds up to 80 mph before turning into the parking lot at Cornerstone Baptist Church where the driver “…proceeded to drive through the grass, around the church and through surrounding fields multiple times,” according to the report.

The driver re-entered Highway 51, this time heading south to the 6-51 intersection where he turned right, headed west on Highway 6.

“After traveling on Highway 6 for approximately 2 1/2 miles the subject turned into Heafner Motors, circled through the parking lot and proceeded back east on Highway 6 into Batesville,” Williams continues.

“The suspect’s vehicle began losing large amount of debris and started slowing down,” Williams states. He made it back to the 6-51 intersection, struck a road sign in its northeast corner, drove through the grass frontage at the Kangaroo convenience store and almost struck a gas pump before heading north through the Piggly Wiggly parking lot and into the MDOT parking lot.

There, “with the help of several police units the subject was forced to stop and the driver was apprehended without incident,” the deputy’s narrative states.

The driver told Williams that “he was hallucinating on narcotics.” He also told the deputy that “he wanted to go to church and that was why he did not stop for my blue lights,” the report continues.