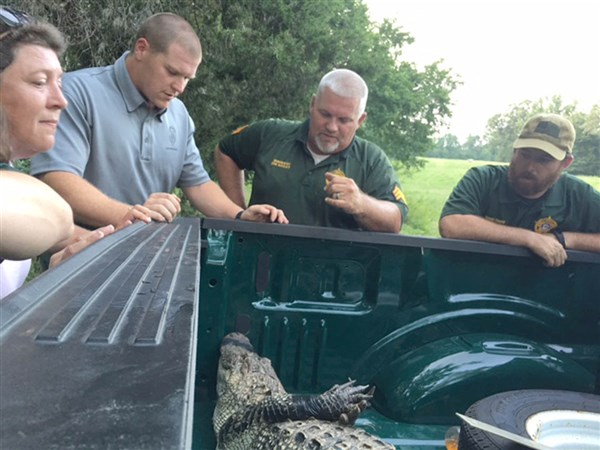 This alligator showed up in a yard on Hwy. 32 Saturday afternoon. Officers (from right) Jason Mangrum, Jim Bailey and Richard Ross, Jr. caught and relocated the gator.

ATER VALLEY – A wandering alligator gave a family a scare and a couple of deputies and a wildlife officer a workout Saturday evening. Mark Ortwein reported he was headed home on Hwy. 32, west of Water Valley, when his daughter called and reported the gator was in the edge of their yard.


“I thought she was joking around because the next day was Father’s Day,” Ortwein said. But when he pulled up in his driveway, everybody was congregated at the edge of their property.  Sure enough, there was a six-and-a-half foot gator basking in the attention.


Ortwein said Ross had a noose to catch the gator and the deputies piled on top of him with Bailey securing the jaws,


“He called it his tactical girth,” the onlookers reported about Bailey’s gator move. The crew then secured the mouth with electrical tape, followed by duct tape before he was placed into a pickup truck. The wrestling match lasted several minutes.


“Ross took him to a wildlife management area in another county,” Sheriff Lance Humphreys reported, adding that this was the first alligator call his department has responded to where an actual gator was there when deputies arrived. The gator had obvious marks of a scuffle including several missing toes lending creditability of the likelihood other gators are in the area.


Ortwein speculated that the alligator may have been eyeing his chickens for a meal, but said the ordeal was a bit alarming. He has lived at the residence with his wife, Sarah, and kids for almost four years.


“My kids have been playing for years on the Corps land behind us, that is out of the question now,” he said.