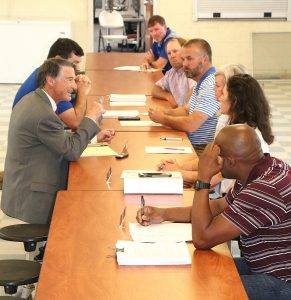 Hampton was placed on administrative leave in late April after allegations surfaced that he requested confidential information on the state’s ELA (English, Language Arts) test on April 21 from teachers and attempted to share it with other teachers. The case against Hampton also included allegations that he questioned a fourth grade special ed student who was the first to take the state test.

Hampton testified in his defense during the hearing, denying the accusations.

The decision by board members came after reviewing the material and listening to final closing comments during the June 30 meeting. Both Hampton and his attorney, Trent Howell addressed the board. The school district’s attorney, John Hooks also provided final comments.

Following the statements, the school board entered executive session to deliberate.

“State law says a school principal can only be fired for incompetence, neglect of duty, immoral conduct, intemperance, brutal treatment of a student or ‘other good cause.’” Howell explained.

He cited a 1997 Mississippi Supreme Court case, Board of Trustees versus Knox involving the suspension of a principal.

Our Mississippi Supreme Court stated the intent behind the state law on termination of a principal’s employment was to make them reasonably secure in the their jobs and subject to removal only for serious cause.

Howell then cited testimony from the May 25 employment hearing from Mississippi Department of Education Michael Martin.

“He testified that the testing was not compromised. Arguably that might have ended the inquiry into Mr. Hampton’s conduct at that point. Mr. Martin also said it would be a violation for a teacher to learn what was on the test and coach or tell a student. That is not what happened. There was no compromise of the testing. It was not tainted, it was not interfered with. That alone takes any inappropriate conduct on the part of Mr. Hampton out of this category of being quote ‘serious cause for removal.’”

Howell then told school board members they have several options.

“It is not that you must either acquit Mr. Hampton, or fire him. It is not an all or nothing discipline situation,” Howell continued. “This board can find that Mr. Hampton’s conduct warrants some punishment, some discipline being imposed. But it doesn’t have to be a termination of his employment. In the Knox case, the school superintendent terminated principal Knox. But the school board modified the superintendent’s decision. They modified his dismissal of the principal and instead suspended the principal without pay for a period of time and the Mississippi Supreme Court affirmed that,” Hampton’s attorney said.

“It is up to you board members, to decide what disciplinary action, if any, should be imposed against Mr. Hampton. You and you alone are to decide his fate. Not the superintendent. Certainly not Trent Howell. Not the citizens of Water Valley. Not the many friends of the Hampton family. There are other disciplinary alternatives out there besides his outright removal. You could, if you find discipline should be imposed, assign him an improvement plan. Or you could suspend him without pay, as in the Knox case. Again, you do not have to fire him. Could he continue working with the teachers and staff if allowed to remain as principal after all he has been through. He assures me he can. Each of you must decide on your own whether or not to give Mr. Hampton the chance to prove himself. Each of us has a vote. Please let it be yours and no one else’s. Remember the vote you cast as to Mr. Hampton’s continued employment will be one of the most important votes you will ever cast. It is an awesome responsibility.”

Trevor Hampton addressed board members after his attorney spoke in the June 30 school board meeting, first thanking attendees for coming to the meeting.

“As teachers can tell you, I write a lot of notes down on note cards and leave them for them. One that I want to share is why I chose to come into education. I believe education, other than clergy, is the highest profession on the face of the earth. And it is a calling,” Hampton said.

Next he shared his note, “This says be a part of something bigger than you. Education is bigger than me, it is bigger than everybody sitting in this room right now. My experience, you know my experience before I got here. The accomplishments I was able to make, along with a lot of great people, it takes everybody. I was hired on that experience and those accomplishments. I am very well prepared to continue working here at Davidson because we are well on our way to making those same accomplishments. It is going to take hard work, it is going to take everybody sitting in this room,” Hampton said.

Next Hampton shared information about his family.

“My family is invested in Water Valley. Just before we moved here my family dealt with the loss of an unborn child, last February. We didn’t have to leave Houston. We chose to come to Water Valley because we saw a lot of potential here. To be honest with you, I have been part of a bond issue that failed. So that is one big draw for Water Valley, 93 percent of the people voted, with a D -rated school, to pass a bond issue. We had an A-rated school (in Houston) and the people voted it down because it wasn’t that important there. That was a big draw for my family to come here. We didn’t know anybody in Water Valley, but we saw a lot of potential. We moved in the middle of the pandemic, which was very tough. Last summer we joined the country club and that was very, very good for my children to meet a lot of new friends – for Penny and me too. We bought a house, we are members of the First United Methodist Church. We are planning on staying here. Rosie will be a second grader, we just enrolled Mamie to be in Pre-K. We are invested in Water Valley and want Water Valley to succeed. But the only way Water Valley is going to succeed is for the schools to succeed,” Hampton said.

Next he shifted to the allegations.

“I want to reiterate what Trent pointed out about Mr. Mark from MDE, the test was not compromised. Two statements I want to point out, because it kind of gets to what is really going on – culture wise at the school and it is very small. But if you look at the research, it takes time for a culture to evolve, as well as it takes time for a better culture to evolve. It is going to take about three to five years, I said that up front. But in a pandemic year this year, we made a lot of strides to improve student achievement, student learning. But statements from an administrator saying ‘I am going to get him,’ that takes all professionalism out. That becomes personal. Also teachers saying that they know more than me, or they know more than consultants that are hired to come in and help them, that is what we are really focused on at Davidson.”

Hampton then talked about the impact on his family.

“I feel like I have been punished enough already. The last two months have been long and hard on my family. It has been a strain on Penny and my daughters, going through uncertainty for two months. My insurance was cut off on May 31 – without being notified. I found out today I was not paid for the month of June – without being notified. Having said all that, the hardest thing about it was trying to explain to Rosie, who was used to her dad driving her to school and being the principal at school every day. About the second day she asked, ‘Daddy are you going to be at school today?’ No baby, I am not. But I continued to drop her off at school every day after that,” Hampton said.

Hampton then talked about the teachers at DES.

“Another point I want to make is, and several of the teachers are sitting here right now. The majority of the teachers at Davidson are working extremely hard, do what we ask them to do, continue to improve and have the best interests of students’ at heart. They have actually throughout this past year thanked me, doing what is best for kids, holding people accountable. Changing the culture and ultimately changing the school takes hard work. And it takes some tough decisions. But we have got to decide at some point after six years of six different principals, we have to make the decision that the principal is the principal at the school. Sometimes the decisions are not the most popular, but I am going to continue to make the best decisions for students. But we have got to decide we are going to get behind a principal, and a principal is going to stay longer than one year.”

Final comments from Hampton were about the future.

John Hooks, the attorney representing the school district, gave the final statement in the June 30 meeting via cell phone.

“I think everybody assembled there tonight can agree that no one takes any pleasure or delight in any aspect or the prospect of someone losing their job. There is no doubt about that. My job as the attorney, however, is to make sure that the process that state law sets out with regard to termination of a school district employee was properly followed and ultimately was a fair process. Here, there is no allegation at all that there was any kind of due process violation, or that Mr. Hampton did not get the requisite notice and have an opportunity to prepare, rebut and defend himself against the allegations that the school district administration put forward,” Hooks said.

Next he addressed the evidence that school board members reviewed to make the decision.

Hooks also said the investigation was thorough and complete.

“I think Mrs. True’s summary of it provides an excellent outline as to exactly the response the administration made in looking into these matters. When the Department of Education came and investigated, they may well have concluded that there was no evidence that the test answers themselves have been compromised outside of Water Valley. However the individual, Mr. (Michael) Martin, did say that the MDE’s investigation is ongoing and regardless of whether information went outside of Water Valley or not, that the disclosure of the test subject matter and materials, as well as the MDE information provides that the test security was in fact violated, and therefor if the allegations in fact occurred, they were violations of the MDE’s testing procedures. You see there clearly that Mr. Hampton was notified of those procedures and in fact, warned by the superintendent himself, not to involve himself in the details of what was happening with state testing. Never-the-less, we had a number of witnesses who came forward with testimony that was virtually unrefuted, indicating that they believed that Mr. Hampton was attempting to share with them information that he had learned about what was on the state tests. These are serious violations, I disagree that somehow that they don’t rise to the level or other good cause,” Hooks said, referencing attorney Trent Howell’s earlier statement.

Hooks added that the allegations are among the most serious violations that an educator can be accused of.

“I think we have overwhelming evidence stacked up, witness after witness who came forward and provided sworn testimony supporting each of the allegations. It provides, I think, a very complete framework on what happened on a particular day in which, for whatever reason Mr. Hampton went throughout the school building and shared information that he had learned with a number of teachers about what was on the state test, which is clearly a violation of the test security procedures,” Hooks concluded.