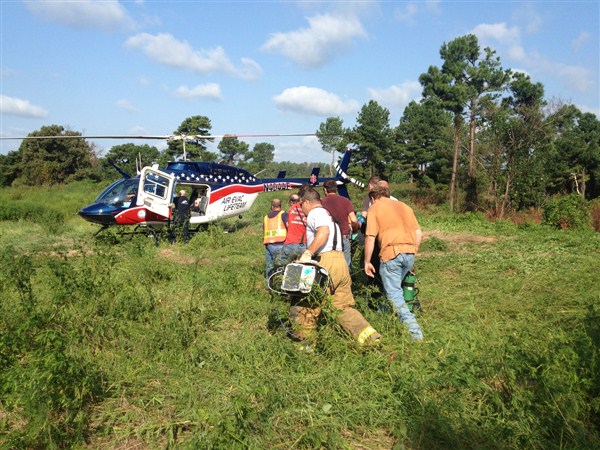 Members of the search party transport Kenneth Byrd to an Air Evac helicopter. He was flown to the Med in Memphis and remains in critical condition. 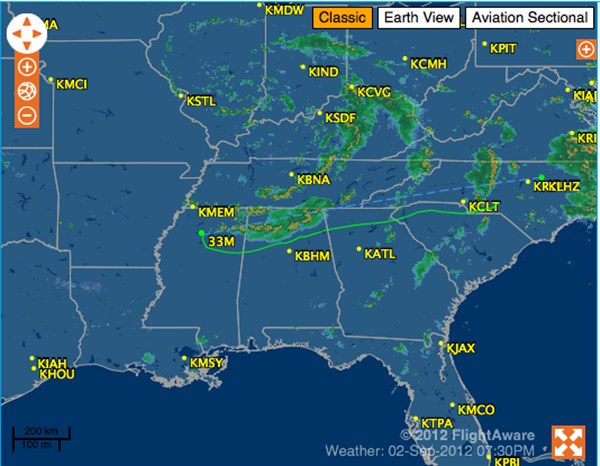 Flight Aware tracks Byrd’s flight after he left North Carolina Sunday afternoon. Although he was headed to Memphis, he was diverted south of strong storms. His flight path ends at Water Valley where the FAA thought he landed. 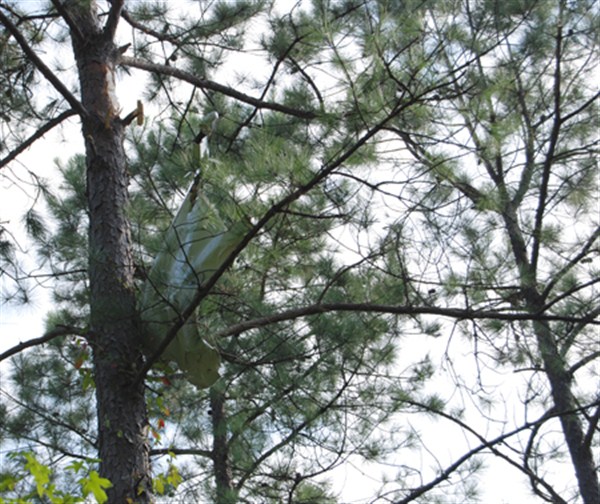 Debris from the plane lodged high in this pine tree, helping making the wreckage visible to Grenada pilot Garrett Pollan. 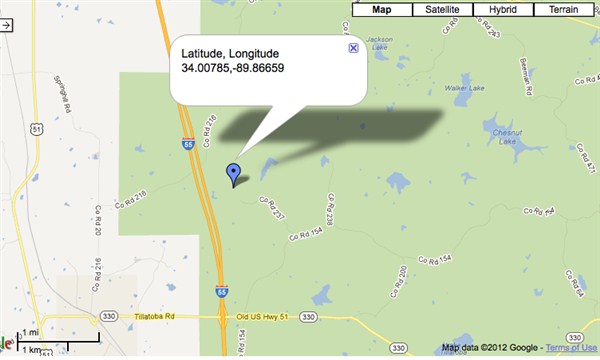 The Blue dot on the maps shows the approximate location of the downed plane.


TILLATOBA – A Germantown doctor remains in critical condition in the MED in Memphis after crashing his Cessna 210 plane Sunday night in western Yalobusha County.
Dr. Kenneth Byrd crashed around 9 p.m. Sunday night near Tillatoba and was trapped in his plane for almost 11 hours while the county’s law enforcement officials and first responders searched until he was found Monday morning.
Byrd is an OBGYN doctor in Cordova.
Sheriff Lance Humphreys reported an exhaustive search throughout the night that started after multiple witnesses reported a possible crash.
“They heard the engine sputtering and then the sound of trees crashing,” Humphreys said.
It took daylight and a search plane to pinpoint Byrd’s location off County Road 237, north of Tillatoba.
Humphreys told the Herald Grenada Airport Manager Garrett Pollan contacted authorities and was ready to assist in the search with an airplane on Monday morning.
“We had contacted airports in neighboring counties Sunday night to make sure a plane had not landed,” Humphreys said. At that time Pollan volunteered to assist with an aerial search and was eager to get started at daylight, according to the sheriff.
“He made two passes and spotted the plane,” Humphreys said. “We can’t thank him enough.”
Humphreys said the pilot appeared to be unconscious when they first approached him, but he was able to raise his arm. He was medevacked from the scene to the Regional Medical Center in Memphis for treatment and is listed in critical condition.
By mid-morning Monday, authorities had secured the scene and were waiting for FAA officials to arrive from Memphis to conduct an investigation.
Humphreys said the plane may have run out of gas, as witnesses heard it sputtering and the tank appeared empty when they found the plane.  They also reported his plane was flying very low.
Authorities also speculated he had veered south of his intended course to avoid heavy storms in the area around the time of the crash. A recording of his flight path recorded by Flight Aware showed Byrd’s path dipped south of storms tracking across the north part of Alabama and Mississippi.
A flight track for the flight, provided by Flight Aware, showed Byrd departed from Louisburg, North Carolina at 3:21 Eastern time enroute to Memphis International Airport.
Just over an hour later, at 4:34 p.m., Eastern time, he was diverted to the Olive Branch airport. Seventeen minutes later, he was diverted again, this time to University-Oxford Airport. Seconds later Flight Aware recorded yet another diversion, this time to Water Valley where his path ended as Flight Aware recorded he had landed at 8:28 p.m. Central time.
A radar station in Byhalia was down at the same time, adding to the confusion of Byrd’s flight status, according to the sheriff.
Water Valley Mayor Larry Hart  confirmed a plane approached the runway at Water Valley around 8:30 p.m., the same time Flight Aware reported the landing.
Hart told the Herald he saw the plane and noticed it changed course, headed toward the airport.
Hart drove to the airport, figuring the plane was trying to land after avoiding the strong storms
When he got to the airport, he saw the beacon was on as were lights on the runway, a likely indicator the pilot had remotely activated the lights and was preparing to land.
Hart said he watch the plane fly parallel to the runway and circle as if making another pass to prepare to land. Then  the plane left, headed north around 8:30 p.m.
“I was going to see if I could help him,” Hart told the Herald.
Although Hart last saw the plane headed north, the next calls came in from Tillatoba with several witnesses reporting a possible downed plane almost 30 minutes later.
It would be the next day before the entire story would unfold, particularly Byrd’s near-landing in Water Valley. After the initial 911 calls, the only thing law enforcement and first responders would have to go on was those sketchy details from those witnesses.
“We stayed with it all night, and the more we talked to witnesses and the longer we searched, the more confident we were there was a downed plane out there somewhere,” Humphreys said.
It turned out the plane was almost a mile from where the witnesses heard it.
“Several times during the night we were within several hundred yards of the wreckage and Byrd, but just didn’t know it,” Humphreys said.
“The volunteers from Tillatoba Fire Department did a good job, they knew every inch of the territory,” he added. “And they were the most disappointed that we were so close during the night and didn’t find him them.”
As the search got underway again Monday morning, the possibility of a crash became stronger after authorities learned Byrd’s wife had not talked to him.
She also found the report of the Water Valley landing and contacted Michael Scroggins, who operates the airport for the city.
Scroggins then contacted the sheriff after 7 a.m. Thursday morning.
“I was able to talk to Byrd’s wife and get information about the flight,” Humphreys said.
It was not long after that conversation when Pollan was airborne and headed to Tillatoba.
“We also had a helicopter coming out of Desoto County, we wanted to do everything possible at this point,” Humphreys said.
The extra airpower wasn’t needed after Pollan found the wreckage on his second pass. A piece of the plane’s wing was lodged high in a pine tree, and the sun’s glare directed Pollan to the wreck site.
“He directed us from the air to the wreckage. He dipped his wings to mark the spot,” Humphreys said.
The sheriff reported they ran the last several hundred yards to the plane. At 8:18 a.m., he radioed back to dispatch that the search had ended. Within 45 minutes, a landing zone was cleared and Byrd was again airborne and headed to Memphis, this time in a helicopter.