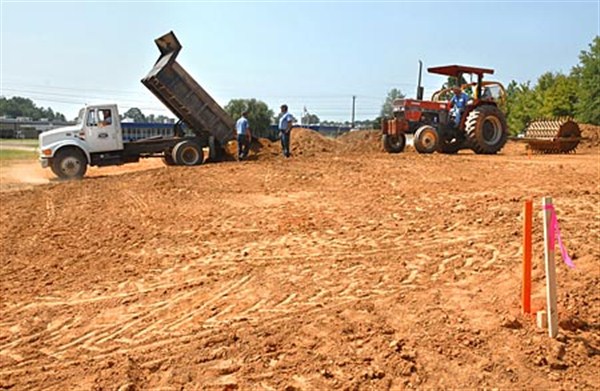 City workers under the director of Street Department Superintendent Mike Scroggins (center) performed “in kind” work last week at the old Bondafoam industrial site where the spec building for Allied Group will be located. County supervisors assisted by providing dirt for the project. – Photo by Jack Gurner


WATER VALLEY – The Blue Devil homecoming pep rally will be held next Thursday, Sept. 20, downtown at the Railroad Park pavilion.
Another pep rally will be held in October, Main Street Association Director Mickey Howley told aldermen at their regular first Tuesday meeting, Sept. 4.
Howley also said that two more events were scheduled downtown for Saturday, Sept. 29. The last Farmers Market of the season will be held that morning and includes an antique tractor show. That evening will be the fourth annual Arts Crawl beginning at 5:30.
Howley noted that the Art Council picked that day since there was no Ole Miss home game. “Mississippi State doesn’t matter,” Mayor Larry Hart added, taking a good-natured poke at Bulldog fans.
Howley continued his report to aldermen saying that Water Valley got an hour’s worth of good publicity from Mississippi Public Radio with the airing of an interview with Main Street business owners Megan Kingery Patton and Coulter Fussell of Yalo Studio. “It was a very positive program about the arts, business and the city.”
Among other actions at the Sept. 4 regular monthly meeting of the mayor and board aldermen:
• Held a public hearing on the proposed $2.7 million city operating budget.
The public hearing is held every year to take comments from the public before the budget is adopted. No one was there to ask questions, so Mayor Larry Hart said that the requirement for a hearing had been fulfilled. “We can adopt this budget now anytime after a week from our hearing.”
Aldermen were to meet Sept. 12 at 9 a.m. to formally adopt the budget that includes estimated revenue of $3,228,475.
• Extended the term of Blackmur Memorial Library Board member Rubye Carr.
• Adopted a resolution to renew the hazard mitigation plan.
• Heard from the mayor that bids would be opened for the “spec building” on the old Bondafoam industrial site at a special meeting on Sept. 28.
The contract will be awarded at the Oct. 6 regular meeting of the board, Hart said. The project is running at least three months ahead of schedule.