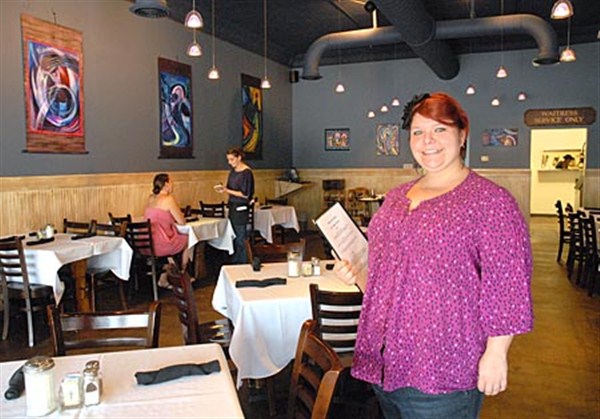 Executive Chef Amanda McKinney created the new menu at Doc’s Table. She also reported service will be faster at the restaurant. – Photo by Jack Gurner


WATER VALLEY – Down-home cooking with a gourmet twist is the way Executive Chef Amanda McKinney describes the new menu at Doc’s Table.
The Main Street eatery suddenly closed recently setting off speculation that it might not reopen.
McKinney said that when the last chef left the owners were going to close the doors for a while. “I told them, ‘No, you can’t do that. This is the nicest restaurant in town. It’s a beautiful building and I don’t want it to go to waste.’ So, I made a menu and I presented it to the doctors – the owners of the restaurant – and they said, ‘let’s go with it.’”
“Everything is southern comfort food here,” said McKinney, who served as sous chef under the three former head chefs. She has been with the restaurant since “day three” in November of last year when it opened.
“My menu is based on foods my family cooked. What I learned how to cook,” she added. “I took my home cooking, put my culinary school twist on it and brought it to this menu.”
“Everything here is made from scratch…even my pickles,” she explained. “If you are going to come and sit down and eat at my restaurant, my food should be better than yours.”
The restaurant will be open Thursday through Sunday for the moment. But, McKinney said that as soon as she can build her customer base, it will be open all week.
The new executive chef acknowledged that in the past there were a lot of problems during lunch. “People were not able to get in and get out in time to go back to work. Right now I have an A-1 kitchen staff. So, I have a guarantee on my menu that if your meal is not at your table in 10 to 12 minutes or less, it’s fifty percent off.”
McKinney said that Doc’s Table will also offer delivery. She and her staff will be passing out “to go” menus to area businesses, industries and the schools, “the places where people maybe don’t have time to go out to eat. But, they have time to pick up the phone and call us and we’ll bring them their food.”
She said that the restaurant will also offer specials and discounts to groups. For example, four or more people will get 20 percent off. And, there’s a special every day, a special every night and a bar special every night, she noted. “Sundays are my big days. I do big specials.”
Doc’s Tavern, the restaurant’s bar will also offer a wide variety of music, according to McKinney. “We’re getting more bands in here. We’re going to have music probably Thursday, Friday and Saturday nights here in the bar and on Tuesday nights when just the bar is open.”
The restaurant is owned by two Oxford-based podiatrists, Dr. Craig Williams and Dr. Michael Whitmore. Williams and his wife Robin are Water Valley area residents and Whitmore and his wife, Suzanne, live in Oxford.