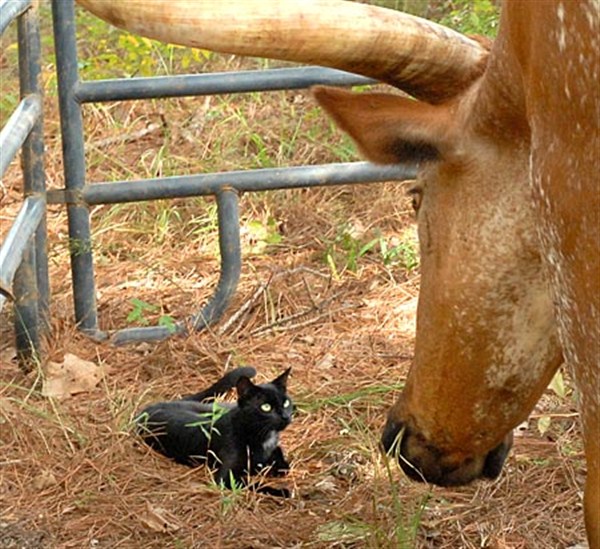 Bevo and Midnight, the cat, exchange looks at Dr. Craig Williams’ farm. With the exception of game time Saturday night, the Texas Longhorn mascot spent the weekend in Pine Valley at Williams’ farm. Rumor has it Midnight is an Ole Miss fan with a large appetite. – Photo by Jack Gurner 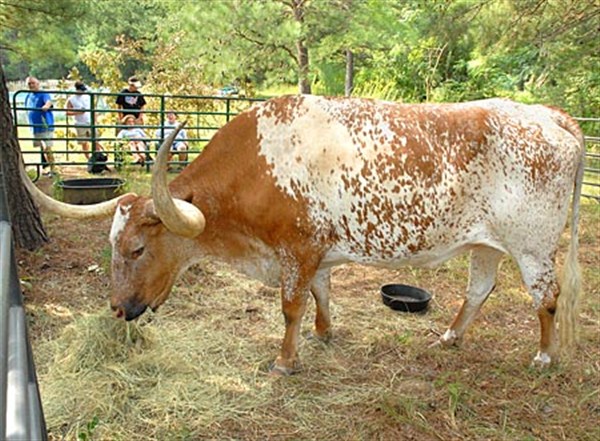 Dr. Craig Williams (background left) is a 1980 University of Texas graduate. Other members of the family and a visitor or two visit with Bevo. – Photo by Jack Gurner 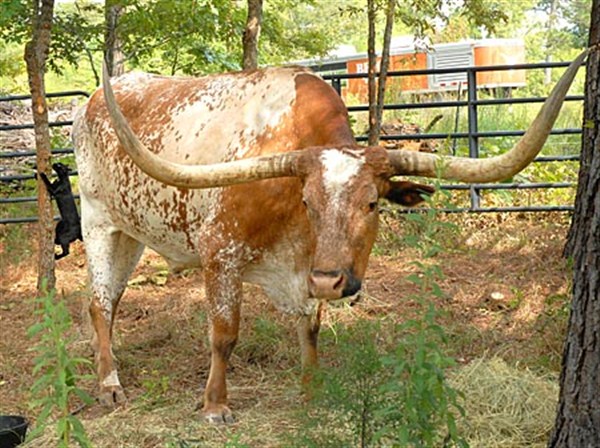 Midnight scoots up a tree for a better angle on his prospective steak dinner. – Photo by Jack Gurner 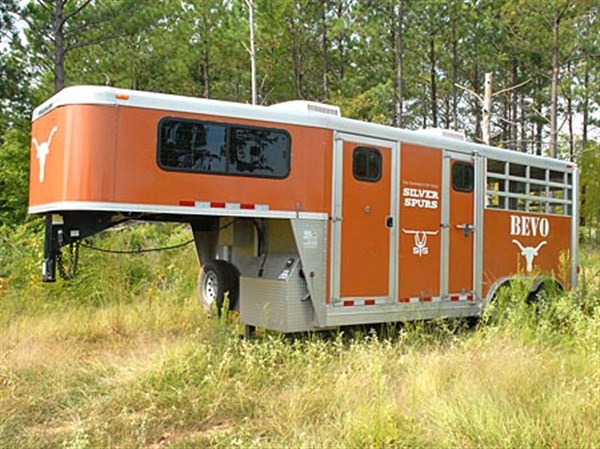 Bevo arrived Friday in a burnt orange trailer with his name on the sides and end. – Photo by Jack Gurner 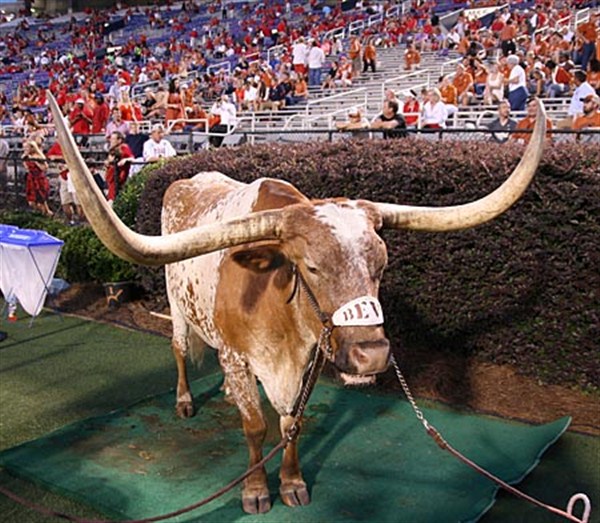 Bevo had to get a little work in during his visit to Mississippi this weekend. He is the Texas Longhorn mascot and was on his best behavior during the game. – Photo by Mark Anthony


WATER VALLEY – There was a celebrity in town over the weekend.
While the folks in Oxford had to settle for rumors about actor Matthew McConaughey and singer Willie Nelson showing up for the big game with the University of Texas, Water Valley actually got a VIP visit.
Who was it? None other than Sunrise Studley, the 1800-pound Texas longhorn steer better known as Bevo– – Bevo XIV to be precise.
The best-known mascot in college football spent the weekend on the Williams spread not far from Pine Valley. It may not be South Fork, but the backyard belonging to Dr. Craig Williams and wife, Robin, was just right for Bevo’s first visit to Mississippi.
No stranger to travel, Bevo XIV attended George W. Bush’s second inauguration in January 2005. He also attended the Texas 2005 Rose Bowl win over Michigan as well as the 2006 Rose Bowl game in which the Longhorns won the Nation-al Championship over USC.
In order for Bevo to go on the road, he has to have certain accommodations appropriate for a fellow with a six-foot horn span.  For one thing, he has to have a secure pen by himself in relatively quite surroundings away from crowds of folks.
So, how did the Williams family end up with a celebrity in the backyard?  It started with a midnight email from Jo Byars, head of the Mississippi branch of the Texas Exes alumni group, asking Dr. Williams if he would put up Bevo for a day or two.
Dr. Williams, a 1980 University of Texas grad, was so excited he woke Robin to ask if it was OK to have a buddy from college for a sleepover. “It could have waited until morning,” she commented.
Bevo arrived Friday in a burnt orange trailer with his name on the sides and end. It’s a ride fit for a superstar, pulled by an equally grand dually pick-up driven by members of the Silver Spurs, an honorary organization of undergraduate students entrusted with his care.
Bevo was put into his guest quarters where he spent most of his first night guarded by some of the Williams’ children. “The boys stayed up ‘til two o’clock,” Dr. Williams said.
There was also a barbed wire fence strung around the pen as an extra layer of security. “I didn’t want to be known as the alumni who lost Bevo,” said Dr. Williams.
On Saturday a handful of curious came by to see the famous steer in person. Rumors had spread of Bevo’s visit. The laid-back longhorn took it all in stride, slowly chewing on some local hay.
The rules state that no one is allowed in the pen, but there was a rule-breaker, the family cat, Midnight. The young feline seemed fascinated by Bevo and appeared to either want to play or have a steak dinner, depending on how you interpret cat behavior.
Saturday evening Bevo attended the big game in Oxford where his team achieved a Texas-size victory over the Ole Miss Rebels with a 66-31 win.

Curious about Bevo? Go to http://www.texassports.com/trads/bevo.html for more info about the big, sweet guy.