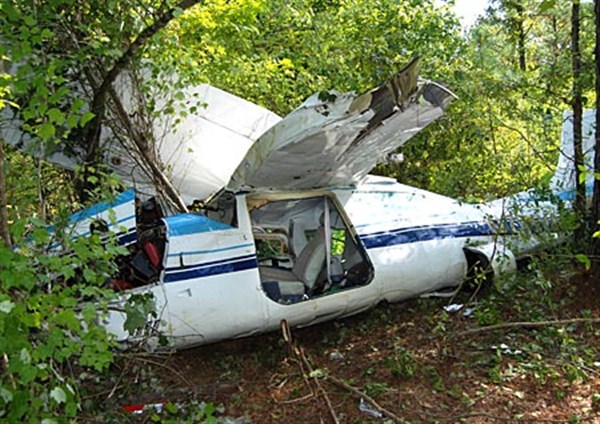 
COFFEEVILLE –  The search for a downed pilot who crashed in Yalobusha County on Sept. 2 could have been shorter if the county had access to a helicopter that night.
Although searchers mounted an intense ground search after receiving 911 calls of a possible plane crash, Germantown physician Dr. Ken Byrd remained  trapped in his Cessna 210 airplane for almost 11 hours until a Grenada pilot got airborne the next morning and spotted the wreckage.
“We ran into a lot of problems on this search. We couldn’t get anybody to fly for us. If we would have had a helicopter that night after the storm went over, we would have found the guy four or five hours earlier,” Humphreys told supervisors during a recessed meeting last Friday.
While acknowledging an experience like this may not occur in the near future, Humphreys said the county could enter a memorandum of understanding with the  Air National Guard and have access to air support around the clock. Fuel for the Tupelo-based helicopter would be the only cost for the county, the sheriff added.
During the night of the search for Byrd, Humphreys said he contacted AirEvac, Wings and the Civil Air Patrol for help with an aerial search with no success.
“Civil Air Patrol has to have a 100 percent confirmed that an airplane is down before they will fly,” the sheriff explained.
Humphreys agreed to obtain specific details of the potential agreement with Air National Guard and report back to supervisors.
“Two or three hundred dollars for somebody’s life is not a comparison,” Board President Tommy Vaughn noted about the fuel expense.
Meanwhile Byrd continues to recover from multiple injuries sustained in the accident. It took 11 days to get him stabilized enough to repair a lumbar spine fracture.
Following the surgery last Thursday, Byrd’s wife again praised the rescue team who worked on the scene with her husband following the crash.
“At surgery today the doctors found Ken’s spine to be very unstable. Because of your heroic as well as meticulous efforts in protecting him from further injury during his extrication and transport, Ken will be able to walk again when his bones have healed,” she wrote on a journal on caringbridge.org.
“I am once again overwhelmed by your efforts on his behalf,” she wrote.
Earlier this week, Byrd was able to come off the ventilator and sit up in a chair for the first time since the accident, according to his wife who posts daily updates on the website.