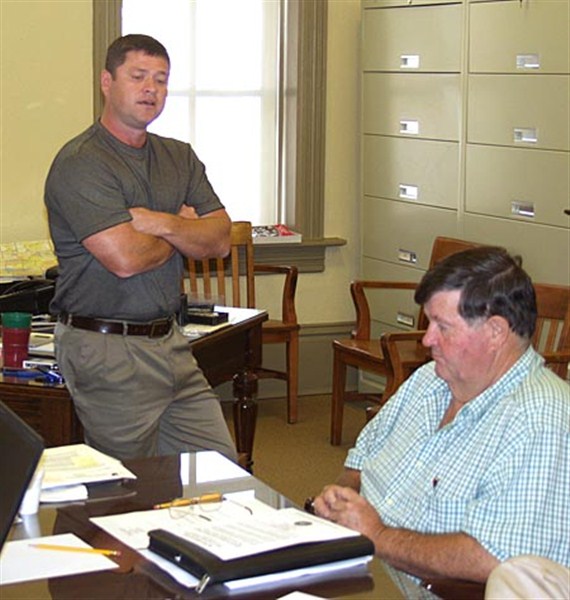 
OAKLAND – Yalobusha General Hospital plans to have a 3,300 square foot health clinic open in Oak-land by the first of next year.
Hospital administrator Terry Varner updated county officials about the status of the Oakland clinic during a recessed meeting held Sept. 14 in Coffeeville.
Varner said the hospital has signed an agreement to purchase a modular office building, which will expedite the process. The building is being constructed in Dallas and should be transported to the Oakland site in November.
“Going modular versus brick and mortar means the construction time is a lot less, Varner told supervisors. “And It doesn’t really have that modular look, it’s more like a bank with the stucco outside.”
Varner added that the size of the building could accommodate traveling doctors and specialists, similar to services already offered in Water Valley and Coffeeville where smaller populations will not accommodate full-time specialists.
Board President Tommy Vaughn said people in the Oakland area are asking about the status of the clinic.
“Also Windsor Foods, everytime I talk to the people at Windsor, they are asking when we are going to get the clinic because it will be an asset to them,” Vaughn said.
“It’s been a long delay, I told Todd (Hughes), our maintenance director, go ahead and get a sign and put it up and get some advertisement in the paper to let people know we are well on our way, now,” Varner said.
Based on census data, Varner said the clinic will likely see 12 patients per day.

Hospital Overview
After giving an update on the Oakland clinic, Varner also provided an overall assessment of the county-owned hospital following a request from Vaughn.
“I think it would be a good thing to give a status of the hospital and nursing home – an overview of how we stand financially where the people will know. I know y’all run it. You have a board and yourself to run it, but it is still county-owned,” Vaughn stated.
Varner said the hospital has experienced the lowest census, as far as the number of acute patients in the hospital in the 12 years he has served as the administrator.
“However, profitability-wise, this is the highest profit year we have had. Financially we have done very well,” Varner told supervisors.
“The hospital patient load has been lower, but the the out-patient side has been higher.”
Varner added that the nursing home stays full.
This year was also pivotable, as far as future plans for the facility, Varner told supervisors.
“We were at the point, my board and myself, of deciding whether or not to build a new hospital and provide additional services,” Varner explained.
He added they had been approached by some of the surgeons in Oxford who compete for surgery time at Baptist Memorial Hospital .
“They said you guys build it and we will come perform minor surgeries at your facility,” Varner said.
But after having specialists crunch the numbers, Varner said the construction of a new hospital was not financially viable.
“This gave us the greenlight, we know now we want to go through a full-blown renovation of the hospital,” Varner continued.
“You saw part of it during January with the 50th anni-versary,” Varner continuing.
Plans including an entire renovation, “from one end to another, nurse’s stations, rooms,” Varner explained. He also hopes to add additional swing beds for rehabilitation rooms.

Coffeeville Expansion
Final comments from Varner centered on growing pains at the hospital-owned clinic in Coffeeville.
“We have patients, at times, that are sitting out in the car because the waiting room is so full,” Varner reported. During the last six months, the patient load has almost doubled.
“We are thinking of utilizing the modular design and putting something in Coffee-ville that would be around 5,000 square feet,” Varner said.
His comments were followed by praise from Board Attorney John Crow, who explained his mother is a resident at the nursing home.
“That nursing home is incredible. You can tell that whoever picks the employees down there do a good job. The employees take care of these elderly people who are really in the last bit of their life. They treat them with respect and tenderness,” Crow said.