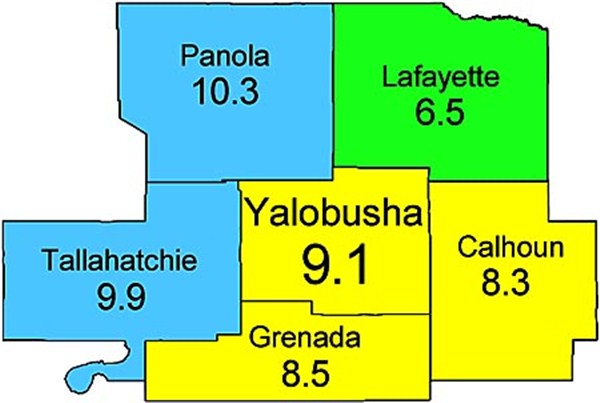 
WATER VALLEY – Unemployment is down over the month of August for Yalobusha County, Mississippi and the Nation as students leave the labor force and return to school.
The latest figures from the Mississippi Department of Employment Services show 9.1 percent unemployment for the county in August, down by more than a point and a half from 10.8 percent in July. Last year the August rate was 11.6 percent.
The MDES estimates show that 100 more people were employed in August, 5340 versus 5240 in July. The number of people in the labor force remained the same, 5880 in July and August. So, the number of people unemployed dropped from 640 in July to 540 in August.
The labor force is defined by MDES as the estimated number of people eligible for work or actively looking for work.
Just three years ago in August 2009, the unemployment rate was 14.3 percent. And, just two years before that in August 2007, the rate was half that at 7.2 percent.
In comparison to the five surrounding counties, the Yalobusha unemployment rate was less than Panola (10.3) and Tallahatchie (9.9), but higher than Grenada (8.5), Calhoun (8.3), and Lafayette (6.5).
Initial unemployment insurance claims for August (64) were the same as July (64).
Continuing claims fell from 707 in July to 529 in August. That is less than a year ago when there were 73 initial claims and 599 continuing claims.
Mississippi’s unadjusted unemployment rate for August was 8.5 percent, decreasing 1.7 percentage points from July’s rate of 10.2 percent. When compared to the year ago rate of 10.7 percent, the rate decreased 2.2 percentage points. Over the month, the number of unemployed decreased 24,800, while the employed total increased 1,000.
The Nation’s unadjusted unemployment rate for August at 8.2 percent was down four-tenths of a percentage point from the prior month, and nine-tenths of a percentage point from the year ago rate of 9.1 percent.
For the month of August, only twenty-six counties in Mississippi posted unemployment rates less than or equal to the state’s rate of 8.5 percent. Unemployment rates decreased in all eighty-two counties. Rankin County posted the lowest unemployment rate for the month at 5.0 percent.
Four counties reported rates greater than 15.0 percent. Clay County had the highest unemployment rate for August at 16.4 percent.