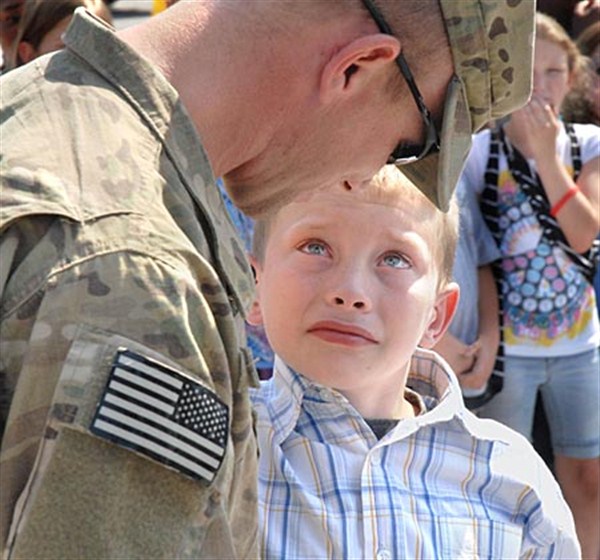 Welcome Home, Dad – Those are happy tears welling up in the eyes of Kolby Woods as he welcomes his father, Lee Woods, home from year-long tour of duty in Afghanistan. The surprise homecoming happened Thursday at Davidson Elementary School during a visit by Memphis TV personality Jim Jaggers. – Photos by Jack Gurner 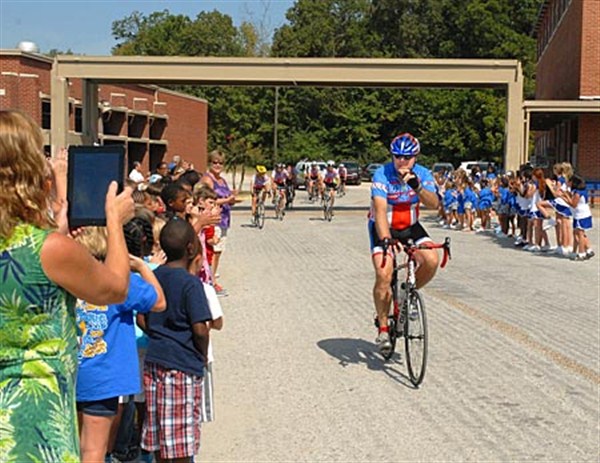 Memphis television personality Jim Jaggers brought his band of merry cyclists to Davidson Elementary School as part of his 333 mile ride for Le Bonheur Children’s Hospital. The WREG News Channel 3 Meteorologist was greeted by the students, teachers and staff with cheers of “Go Jim Go” (photo below) 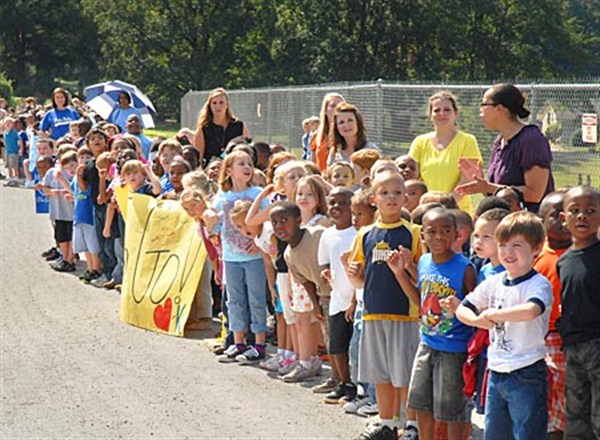 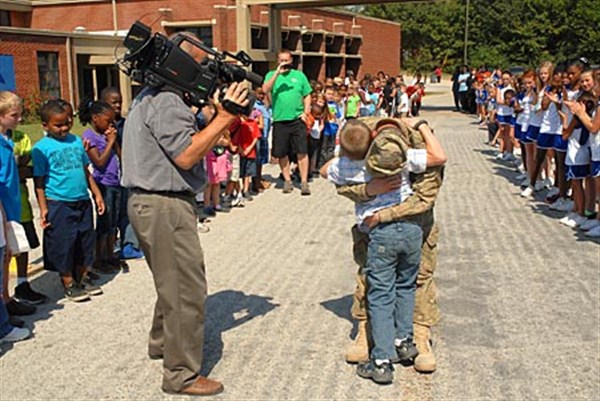 Long-time reporter, producer, and videographer Mike Suriani captured the emotional reunion for News Channel 3 as Kolby and his father shared a homecoming hug. 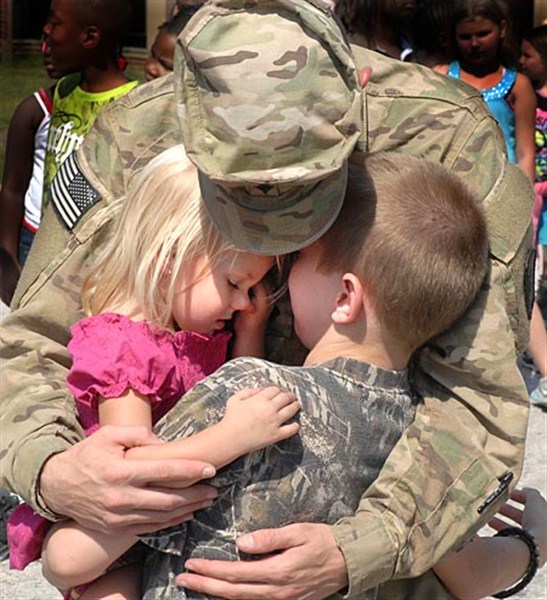 Lee Woods hugs his children, Addison and Kolby, during the emotional homecoming Thursday at DES. 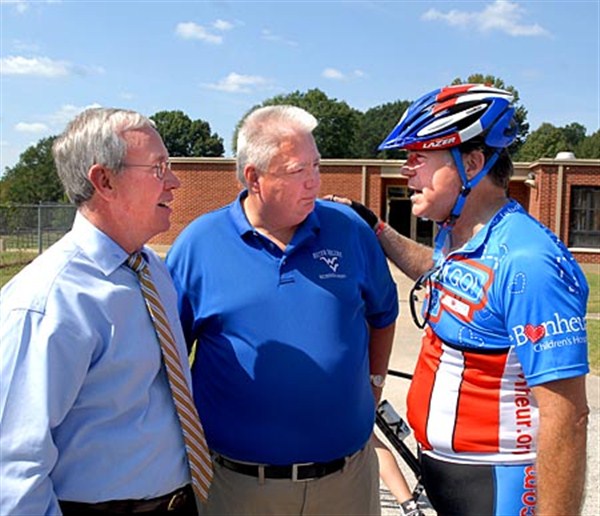 Superintendent Kim Chrestman and DES Principal Chester Drewery are congratulated by Jaggers for the fundraising work done by the young students.


WATER VALLEY – Third grader Kolby Woods was expecting to greet Memphis television personality Jim Jaggers Thursday with his classmates at Davidson Elementary School. What he wasn’t expecting was to see his father, home from a year-long tour of duty in Afghanistan.
The emotional reunion was arranged by his grandmother, Judy Brewer, a seventh grade teacher at Water Valley Junior High. She wanted to surprise Kolby when her son, Specialist Lee Woods of Southaven, returned from his first deployment with the 288th Sapper Company based in Houston.
Kolby and his two-year-old sister, Addison, had been living with Brewer and her husband, Jeff, while Woods was deployed.
Early last week, Brewer learned of the Thursday visit by Jaggers, who was cycling through Water Valley as part of his 333-mile tour to raise money and awareness for Le Bonheur Children’s Hospital. The young students at DES have been fundraising and Jaggers was stopping by to pick up a check for their contribution.
Since Woods was returning Thursday, Brewer contacted school officials and News Channel 3 seeking permission to have the surprise homecoming coincide with the visit by Jaggers. Everyone agreed and the stage was set.
Thursday morning Jaggers rode onto campus at DES to the cheers of students chanting “Go Jim Go.” Jaggers praised the students for their fundraising effort and thanked them for the contribution to Le Bonheur. “You’ve got great kids here,” he said. “Wonderful students.”
Jaggers added that he had another surprise. “We traveled from Memphis to get here,” he said. “But, there is somebody else who traveled a really long way to get here.”
He then called Kolby out of the crowd of students and asked him to tell a little about his father. “He’s a good man,” Kolby said. “He likes to fish.”
“Where is he now?” Jaggers asked.
“He’s in Afghanistan,” said Kolby.
“No, where is he now?” Jaggers repeated.
“In Texas,” Kolby answered.
“No, where is he right now? Jaggers asked.
The third grader’s eyes widened.
“He’s right here right now, Kolby,” Jaggers said. “Lee, can you come on out.”
The realization that his father was home was beginning to sink in. Kolby turned toward his father and began to run.
“Go get him Kolby, go get him buddy,” Jaggers urged.
As the students and teachers cheered and clapped, Kolby ran into his father’s arms.
Little sister, Addison, joined in and the three hugged.
When asked what it felt like to be home, Woods said simply, “It feels good.”
Woods said earlier that he now plans to do some hunting and fishing with Kolby and spend some time watching his daughter grow up.

Wood’s Mission
The official mission of the “Hilltopper” Mississippi National Guard Unit while in southern Afghanistan was to help train the Afghan Army in the use of engineering equipment, construction and base security. Among their tasks was the detection of improvised explosive devices (IEDs), which they would then detonate, a very dangerous mission in a very dangerous location.
“We had a route clearance mission which meant you ride up and down the roads in armored vehicles, approximately two to five miles an hour and look for IEDs in the ground. We dig them up and destroy them,” he told reporters.