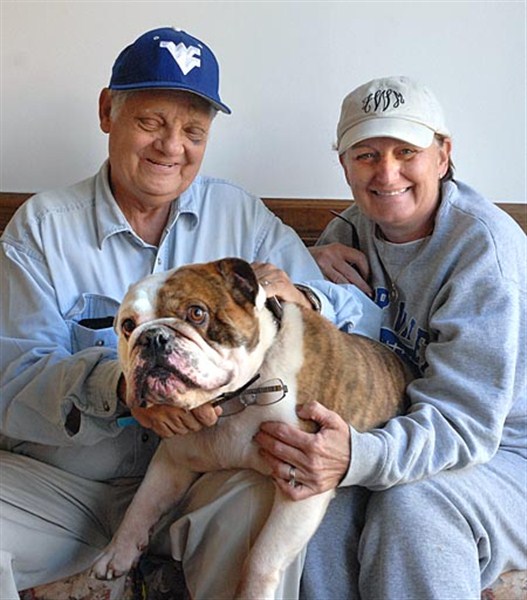 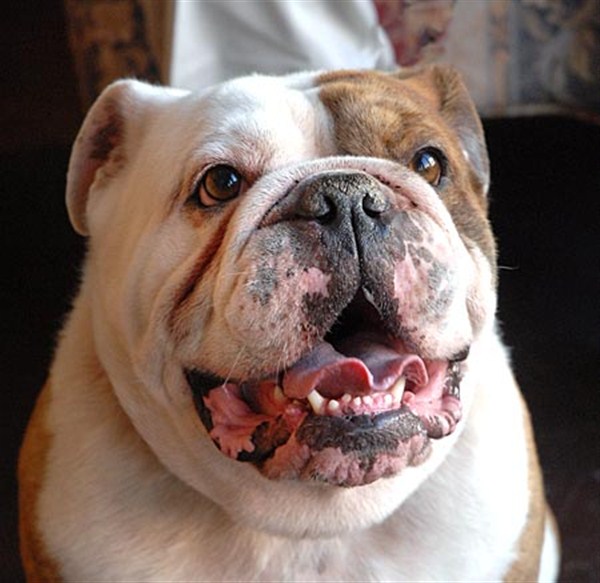 A Happy Dale…but, it is kinda’ hard to tell. 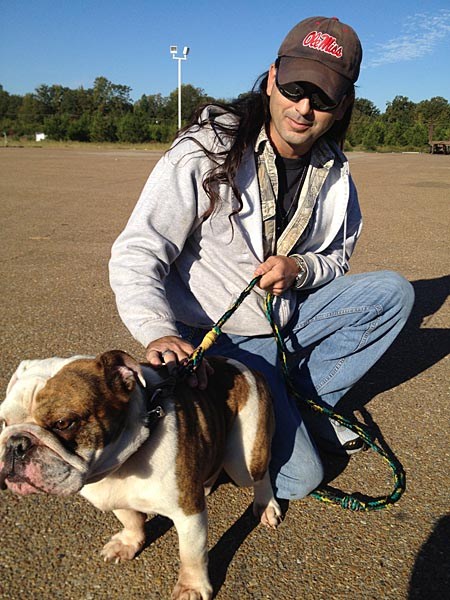 Bruce resident Kenny Howell took good care of Dale until he could be reunited with his family. Howell picked up the pooch on the highway after he had to stop to keep from hitting him. Apparently Dale climbed up in bed with Howell and was fed bacon and biscuits during his “visit.” – Photo Provided


WATER VALLEY – This is the tale of a lucky dog. Actually two lucky dogs; one human and one canine.
The story begins with John Walker, son of Dr. Joe and Zandra Walker, leaving his pampered pooch, Dale, with the “grandparents” so he could go to St. Louis to see the Cardinals play.
The good-natured Dale, an English bulldog, enjoys the extra pampering he gets from Zandra, according to family. And, he gets to play with his “uncle” Chew, a shih tzu mix belonging to Zandra.
The visit was going well until Saturday afternoon when Dr. Joe let the dogs out to go do their business. He had to run an errand and left without letting the dogs back in. When he returned Zandra wanted to know what he had done with the dogs.
“That’s when the commotion started,” Dr. Joe said.
He and Zandra combed the area around their home on Hwy. 32 and drove the surrounding county roads. Zandra called friends and neighbors and eventually about 40 people were involved in the hunt.
A possible sighting over the weekend prompted a search not far from their home. Brother-in-law Kenny Taylor said that Zandra was calling out, “Dale, it’s your grandmommy,” as she walked through the woods brush.
Unknown to the frantic searchers, Dale was safe and apparently quite comfy at the home of Kenny Howell of Bruce. Howell was headed home on Hwy. 32 just before dark Saturday when he spotted something standing in the rain in the middle of the  road.
Howell had to come to a complete stop since Dale wouldn’t move. When he opened the car door, Dale, who loves to ride, jumped in.
Howell found John Walker’s name and phone number on Dale’s collar and called, but Walker didn’t recognize the number and didn’t call back. He was unaware that his pooch was missing.
Monday morning Zandra contacted the Herald to place a lost dog advertisement and see if anyone had reported finding a dog. She still hoped to find Dale before John returned home Monday evening.
Later in the day she made Dr. Joe call John, who was on his way to his home in New Albany from St. Louis, to let him know  his pet was missing. John remembered the call from the unknown number and connected with Howell in Bruce, who agreed to meet with family Tuesday morning at the Shell service station here.
The Walker’s, along with Kenny and Peggy Taylor, brought Dale by the Herald  office following their reunion. Dr. Joe acknowledged that both he and Dale were “lucky dogs.”
And, as he watched everyone else leave, Doc commented, with an expression of dejection that matched Dale’s natural Bulldog look, “I think they’re going to go off and leave me sitting here.”