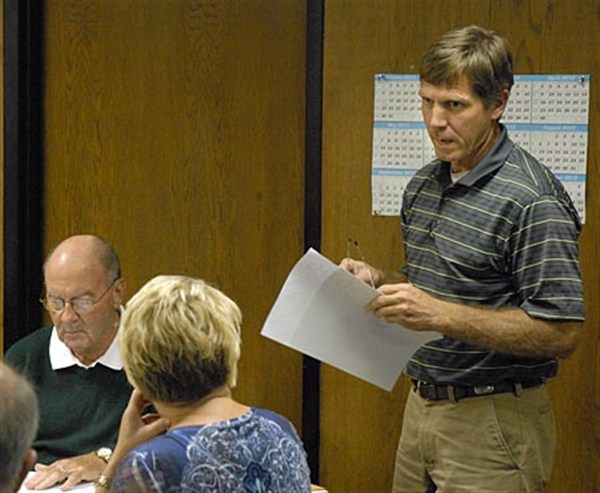 
WATER VALLEY – Aldermen have accepted the low bid from Goodwin Construction Co. to build an industrial building on the old Bondafoam property.
The $384,159 bid was approved at the regular monthly meeting of the board Oct. 2 based on the recommendation of Willis Engineering, the city’s engineering firm. Their recommendation came in spite of a formal letter of objection from next lowest bidder bidder, Ralph McKnight & Son Construction Co., related to bid irregularities on the project.
Willis representative Carl Grub explained that he spoke with Bryan McKnight, president of the firm, who said that Goodwin Construction Co. did not acknowledge in their bid that they had a bid bond. “The low bidder does, in fact, have a bid bond,” said Grub. “He did have a bid bond in his package when he submitted it.”
The only other thing found by Willis Engineering was lack of acknowledgment on the front of the bid proposal by Goodwin that they had received the addendum. Grubb said that he talked with Jimmie Goodwin who said he did receive the addendum, but did not acknowledge it on the sheet. But, he included all the addendum items in the bid package and in his bid.
“We’ll leave the legal part up to your attorney,” Grub noted. “But, it is our recommendation that you waive this minor informality and award it to this low bidder.”
The Kosciusko-based McKnight firm bid $399,325, which is $15,166 more than the Goodwin bid.
When completed the building will house the Allied Group, an industrial filter manufacturer from New Jersey. The company, which will employ around 35, is currently in operation in the county-owned industrial building in Coffeeville.
Among other actions at the first Tuesday meeting, aldermen:
• Heard from Water Valley Main Street Director Mickey Howley who began his report with the art crawl, which he said brought visitors from as far away as Washington, D.C.
Mayor Hart asked Howley for a “guesstimate” of the number of out-of-towners. “My seat of the pants guess is about 500,” Howley replied.
“I would agree with that,” Hart said. “That was a lot of folks.”
In other matters, Howley invited city officials to the WVMSA annual meeting Thursday, Oct. 18, beginning at 7:30 p.m. at the office on Main Street.
On Oct. 24 a group of Mississippi State architects are coming to town to look at the “pocket park,” property at the corner of Main and Wagner Streets owned by Dick Marchbanks. The students will come up with a plan to clean up the property and make it useful again, Howley said.
Oct. 25 will be the last home game pep rally for the Blue Devils at the Pavilion in Railroad Park, he added. And, on Nov. 3 there will be another Community Sing-along at the Hendricks Building. Last year’s sing-along won best special event in the state Main Street Association contest.
• Opened and agreed to take under advisement bids for a new garbage truck. The apparent low bid of $117,526 was from Pac-Mac of Bay Springs.
• Agreed to purchase a new long-wheelbase Chevrolet Silverado 1500 truck for the water and sewer department at state bid price of $16,902.
• Wrote off $7,102.45 owed to the city electric department. This was a routine yearly procedure that is now being handled quarterly at the recommendation of TVA, Hart explained. The department will continue to attempt collection of the overdue accounts.
• Granted a request from J. C. Womble, chairman of the parade committee of the Tri-Lake Fairgrounds Association, to hold the annual Christmas Parade at 1 p.m. on Saturday, Dec. 1, with a rain date of Dec. 8. The group also requested permission to use of the downtown Railroad Park and pavilion for the activities before and during the parade.
• Adjourned after meeting for just over 20 minutes. Absent from the session was Alderman Fred White who is dealing with health issue.