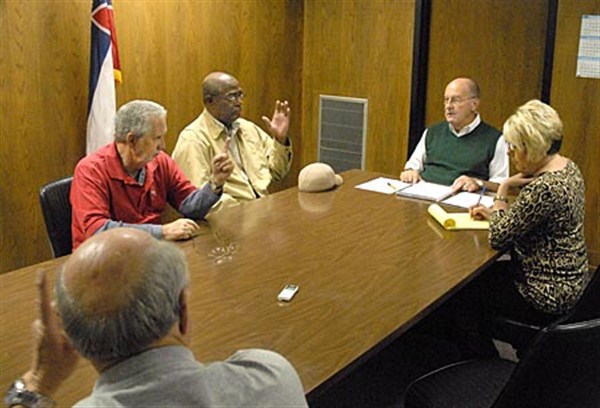 Aldermen gave Mayor Larry Hart the go-ahead to sign a lease agreement with the Allied Group during a brief special called meeting at City Hall last Thursday. Alderman-At-Large Donald Gray is present, but out of frame to the left. – Photo by Jack Gurner


WATER VALLEY – City officials have approved a ten-year lease with the Allied Group for the new industrial building north of BorgWarner.
Aldermen gave Mayor Larry Hart the go-ahead to sign the lease agreement during a brief special called meeting at City Hall last Thursday.
“We’re looking at a ten-year lease. It’s a 16,200 square foot building and 2.195 acres of land,” Hart said. “Of course, the city will maintain ownership all the way through. It’s not a lease-purchase; it’s just a straight lease.”
The building project first appeared on the public’s radar seven months ago when Mayor Hart alluded to an industrial prospect at the Chamber of Commerce banquet. One week later, aldermen voted to enter into an agreement with the Mississippi Development Authority to borrow $250,000 for “construction of an industrial building to accommodate an industry.”
In June, Tracey Giles, bureau manager for the Community Services Division of the MDA, identified the company as the Allied Group, an industrial filter manufacturer from New Jersey. She said that money to get the company here came in the form of a $100,000 Rural Impact Program grant and another $208,075 under the Capital Improvements Revolving Loan Program.
The company is currently in operation in the county-owned industrial building in Coffeeville while the building in Water Valley is under construction.
In other action at the Aug. 11 special meeting, aldermen agreed to purchase a three-quarter ton pickup truck for the water and sewer department at state bid price of $19,656 instead of a half-ton truck approved at the Oct. 2 meeting.
The reason for the switch to the larger truck was to accommodate a recently purchased vacuum trailer. The difference in price is $2754.
Alderman Fred White, who has been ill, was on hand for the meeting. White said that he was feeling better and added, “As far as I know, I’ll be back from now on.”