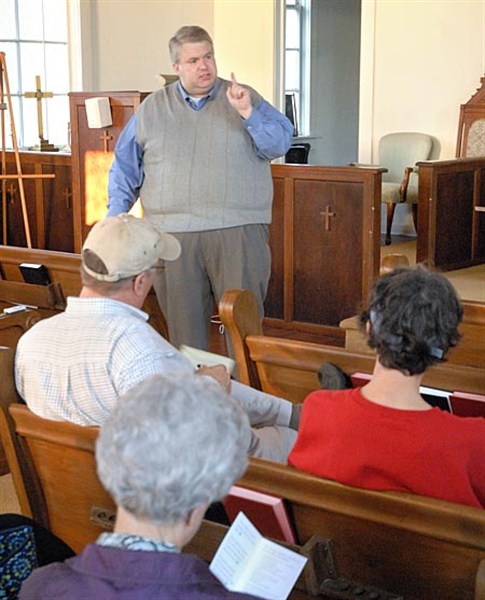 Public Service Commissioner Brandon Presley described his relentless attack against utility companies in the state during a visit to Oakland last week. Presley said utility profits are too high in Mississippi. – Photo by Jack Gurner


OAKLAND – Utility customers in Mississippi are paying too much for electric power, according to Brandon Presley, Public Service Commissioner for the Northern District.
“I have been clanging the bell now for a long time about the profits that companies like Entergy and Mississippi Power are making,” Presley said Oct. 9 at a rural community meeting held at the old Presbyterian Church in Oakland.
“As of today Entergy is making over 11 percent return on its investment. There’s nobody who can go to the bank and get that kind of interest on money,” he said. “I think they’re making too much money at the expense of customers and we’re working hard to get that down.”
Mississippi is tenth in the nation on the amount of profit companies are allowed to make on electricity, Presley noted. “Mississippi is the poorest state in the United States of America and these power companies who are selling a product you have to have are out there making 11.5 percent profit.”
The PSC has opened an investigation to question electric power companies about their profits. “We’re the only commission in the United States right now who is doing this.”
“Think about it this way. The person who you get your electricity from is the only person you can get your electricity from. You can’t choose to go to another provider,” Presley explained. “To me that is obscene that they would be able to make that kind of money at the expense of Mississippians.”
Presley said the PSC has done a lot toward reining in the utility companies’ costs. “In the past when you paid your Entergy bill you got to pay for their corporate jet. You got to pay for their giveaways to all sorts of things such as operas and sponsoring golf tournaments.”
He said the companies should pay for those things out of their profits and not charge them to customers as a cost of doing business. “We identified millions of dollars in costs that were passed on to customers for jets and charitable donations and those sorts of things they were billing the customers for.”
“They did it because they were let get by with it,” he emphasized and added that new rules passed by the commission have put a stop to those charges.
Presley also talked about other programs promoted by the PSC including Life Line, a $9.25 per month discount for telephone services. Initially the program was only for those on other federal subsidy programs such as Medicaid, SSI, school lunch program or if you lived in government housing.
Since joining the commission, Presley has pushed through a reform that added an income eligibility that allows struggling individuals and families to join the program. The income limit for a one-person household is $1257; a two-person household, $1702; three-person, $2148; etc.
Money for the program comes from the Universal Service Fund that is charged to every telephone user. It is the same fund that helps build infrastructure such as land-lines and cell towers to improve rural phone service.
Presley said that utility consumers are urged to contact his office with questions or concerns about utility services. The toll-free number is 1-800-637-7722 and the email address is brandon. presley@psc.state.ms.us.
Investigator John Wortham covers Yalobusha along with Calhoun, Leflore and Tallahatchie Counties. He is available at the Yalobusha Sheriff’s Office on County Road 436 on the first and third Wednesday of every month from 2-4 p.m.