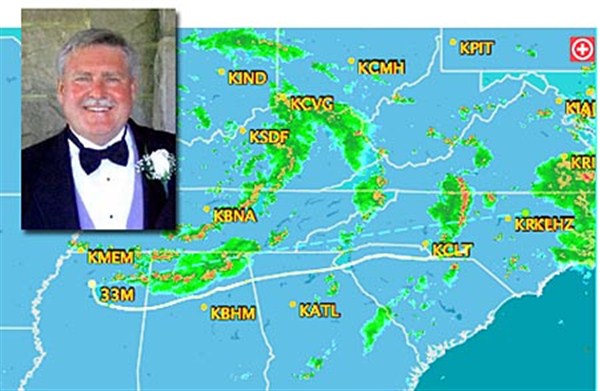 Dr. Ken Byrd shown with the Flight Aware map that tracked his flight after he left North Carolina. Although he was headed to Memphis, he was diverted south of strong storms. His flight path ends at Water Valley where the FAA thought he landed.


MEMPHIS – For-ty-six days after narrowly escaping death in a plane crash, a Germantown doc-tor has been released from rehab and spent his first night at home last Thursday.
Dr. Kenneth Byrd crashed his Cessna 210 airplane on a stormy night in a wooded area in western Yalobusha County, just north of Tillatoba on Sept. 2. He spent 11 hours trapped in his crumpled airplane before rescuers found the wreckage the next morning.
He was immediately medivacked to the MED in Memphis, where he spent 26 days undergoing multiple surgeries for serious injuries. Patients, friends and well-wishers were able to read about the slow recovery through a daily update posted by his wife,  Dr. Kathy Byrd, on Caring Bridge, a website designed to connect family, friends and loved one together during precarious times.
She reported it was a full five days after the crash before he opened his eyes and squeezed her hand. It was three weeks before he was able to sit up in a wheelchair. On October 1, he passed a “swallow test” and was allowed liquid for the first time since the crash. And in the days prior to his release from rehab, his therapists had nick-named him “speedy Gonzales” as he scooted around in a wheelchair still recovering from surgery on his leg, wrist and back.
A night after arriving home, the words on Caring Bridge came directly from Dr. Ken Byrd for the first time.
“Hello everyone from Ken. I am finally home,” he reports.
He wasted no time giving praise to the first responders in Yalobusha County, a sentiment his wife has also shared during the ordeal.
“I want to give special thanks to the rescue crew in Mississippi who got me out of the plane. In spite of the serious injuries I sustained, they were able to get me out of the plane and transport me to the MED without causing any further injury despite my having a seriously broken back. Due to their professionalism and care, I can still walk today,” Dr. Byrd added. “You guys are the greatest.” He concluded.
The rescue operation was emotional for many who searched through the night before a rescue plane got airborne the morning after the crash and spotted the wreckage.
“I will never forget my first impression when we got to the plane. I really thought he had not survived and was surprised when he raised his hand as if to say ‘here I am,’” sheriff Lance Hum-phreys told the Herald.
Humphreys added it was fortunate that Dr. Byrd was positioned in the cockpit in a manner that made the extraction simple.
“We were able to remove the airplane door and get him on a backboard with minimal movement. After we had secured him, he remained strapped to the backboard during the helicopter flight to the MED,” Humphreys explained.
Humphreys, EMA Director Frank Hyde and countless first responders had responded to the report of a possible plane crash and searched throughout the night despite no information from the FAA regarding a possible plane crash.
Humphreys explained they talked to numerous people who lived in the area who had information about a low-flying plane that was sputtering as it went over houses at treetop level.
Dr. Byrd had planned to land at the Water Valley Airport after strong storms caused him to dip farther south in  his flight from North Carolina to Memphis. He maintained radio contact with FAA  until he prepared to land at the Water Valley airport after being diverted several times from his original Memphis destination.
Water Valley Mayor Larry Hart saw Dr. Byrd make two passes by the runway before he flew away.
Hyde speculated that Dr. Byrd may have seen the lights from the Tillatoba Truck Stop in the final seconds of the flight after tracing a southwesterly direction of travel from witnesses’ reports. His plane seemed starved for fuel as one person reported hearing the engine sputtering and seeing Byrd dip his wings back and forth as he flew over, another indication he may have been trying to get the last drop from the tanks in the wings.
The National Transpor-tation Safety Board (NTSB) has not released a final report on the cause of the accident. In a preliminary report, the NTSB report the pilot experienced a total loss of power and subsequently performed a forced landing in a wooded area about 13 miles from the Water Valley Municipal Airport. A handheld global positioning system receiver and a digital engine monitor were recovered from the wreckage and forwarded to the NTSB Vehicle Reorders Laboratory, Washington, DC, for data download.
Meanwhile the healing continues for Dr. Ken Byrd. He will undergo therapy for another six to 12 months. The last report on Caring Bridge came on October 20 .
“For now I am signing off of Caring Bridge.  As we are finding a new rhythm of ‘normalcy’ I hope that there will be nothing exciting to report,” Dr. Cathy Byrd said in closing.