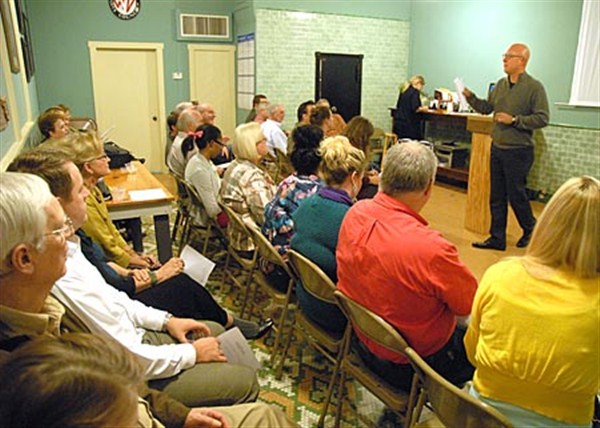 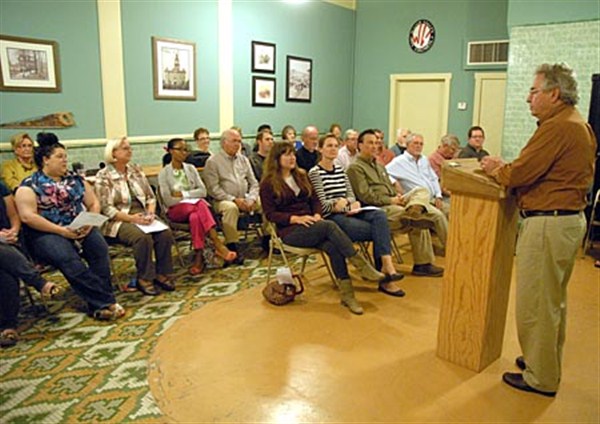 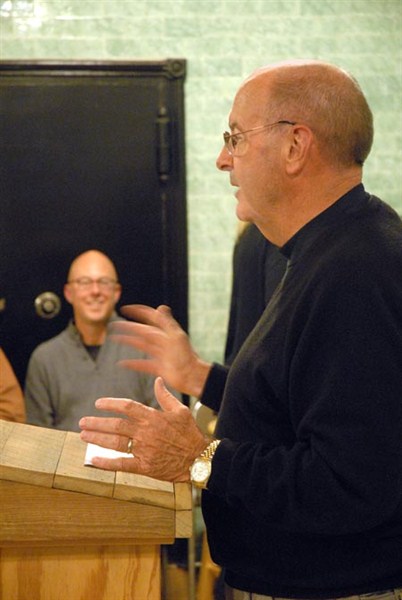 Water Valley Mayor Larry Hart discussed the relationship between the City and WVMSA. 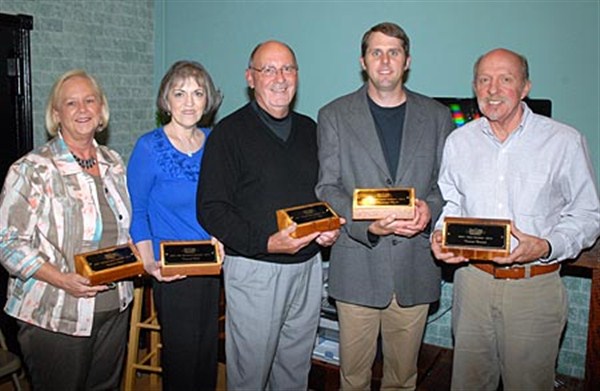 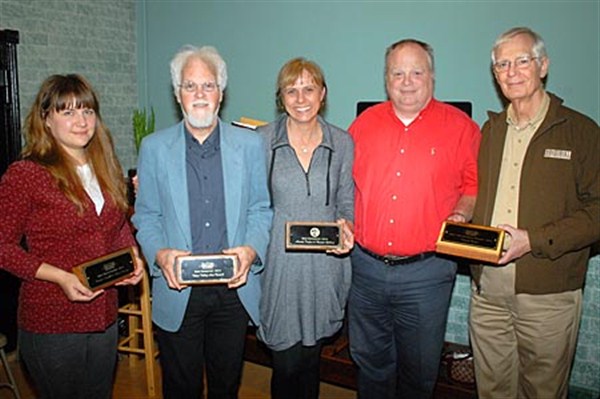 Honored for their support of the Water Valley Main Street Association during the annual meeting last Thursday were the husband and wife team of Coulter Fussell (left) and Amos Harvey, Water Valley Arts Council represented by Bill Warren and Bozarts Gallery represented by Annette Trefzer. Bobbie Turnage and Binnie Turnage are pictured with their five-year award. – Photos by Jack Gurner


WATER VALLEY – The Main Street Association has had a major economic impact over the five years of its existence, helping to create 52 full-time and part-time jobs downtown.
“That is what we do as an association,” WVMSA Director Mickey Howley said at the annual general membership meeting last Thursday. “We have some fun, but we make an economic difference.”
Howley said that 75,000 feet of commercial building footage that was formerly empty and sitting has been saved. Of that amount, 40,900 square feet is back in retail service and 34,700 of that has been renovated.
“If you total up all of that economic energy, it’s about $1.8 million dollars of private investment in this downtown area in the past five years.”
He added that if you live here you don’t see the transitions. “But, when visitors come or when former residents come back, they see the transitions. It’s just human nature. You don’t notice these slow transitions.”
Howley announced that he had just learned that architectural historian Todd Sanders, who runs the tax credit program at the Department of Archives and History, had just completed the first tax credit program in Water Valley for the Hendrix Machine Shop Building.
Those credits are available because the 106 buildings in the Main Street Historic District are now listed on the National Register of Historic Places, another Main Street Association accomplishment.
Mayor Larry Hart spoke to the group and said that when he visits other parts of the state, Water Valley’s Main Street program is often a topic of conversation. “I get to Jackson quite frequently and even today I was down there and Water Valley Main Street was brought up.
Hart said that he was talking with Mississippi Development Authority Director of Community Services Division Steve Harding. “I wanted to talk with him about something else and he kept bringing up Main Street Water Valley.”
The mayor added that he had been invited to speak to the Senatobia Rotary Club. The guy said, ‘I want you to talk about the railroad in North Mississippi and then we want to hear about your Main Street program.’
Hart congratulated Main Street for doing a fantastic job and meeting its goals.
“We appreciate each of you. Thank you for your hard work. And, may God bless Water Valley.”

Awards
Rounding out the meeting was the presentation of awards by Howley and WVMSA vice-president Eddie Ray covering the past year and the five-year existence of the organization.
The first award was for “Most Supportive – 2012” and was made by Betsy Person of the Arts Council to Annette Trefzer and  Howley for allowing the use of the Bozarts building as well as their generous contribution of personal time to support the arts in Water Valley.
The association’s yearly awards went to the husband and wife team of Coulter Fussell and Amos Harvey; the Arts Council and the Crawdad Hole Junior.
Five-year awards were presented to organizations and individuals who have consistently supported the mission of the WVMSA including the North Mississippi Herald, Turnage Drug Store, Renasant Bank, Mechanics Bank, City of Water Valley and Ramona Bernard.
Three new board members were also elected at the meeting including Jessie Gurner, J. Clayton Peacock and Bill Pullen. Tyler Wortham was elected as an alternate board member.