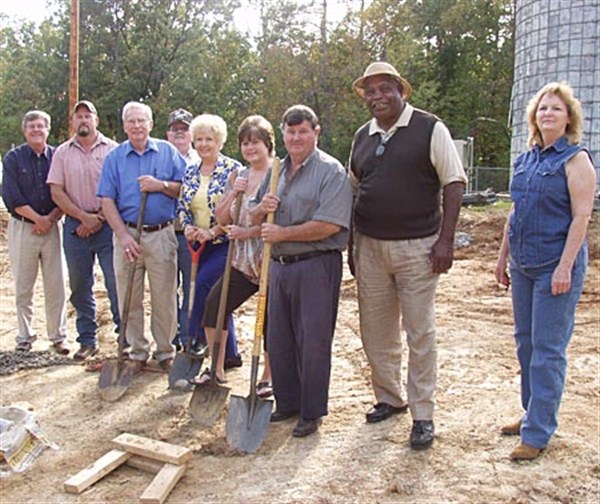 
Construction has started for a new  100,000 gallon water tank for Young’s Water  and Sewer District (YW&SD) in southwest Yalobusha County.
Work got underway this month on the water tank, a process that took over two years as YW&SD directors sought funding to help offset the $484,000 project.
In November, 2010, YW&SD engineer Joe Sutherland explained to Yalobusha supervisors the cost of the tank would be a hardship without some matching money. The water association serves an estimated 1,260 people living in the the corner of Yalobusha, Calhoun and Grenada counties.
The tank will replace a 40,000  gallon concrete tank constructed in 1979 that had a leak.
YW&SD President Sidney Parker explained at last Thursday’s ground-breaking that the repair of the aging tank was not cost feasible. A bladder inside the concrete tank had a hole that caused the seepage.
“It could go out tomorrow or it may have lasted another five years,” Parker added.         Although the water system uses two tanks, Parker said water usage would have to be restricted if the older tank completely failed.
Utilizing the Drinking Water Systems Improve-ments Revolving Loan Fund (DWSIRLF) Program,  YW&SD was able to secure principal forgiveness that will retire $259,000 of the $484,000 loan secured for the project. This leaves $222,000 that will be financed long-term, minus money that will be paid from the district’s reserve funds when the project closes next year.
Parker praised both Yalobusha and Calhoun counties for helping make the project a reality as well as Yalobusha County Economic and Tourism Director Bob Tyler.