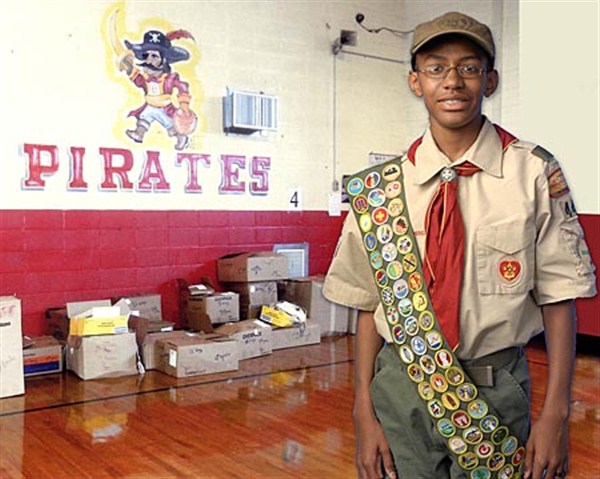 
COFFEEVILLE – Elementary school students have much needed school supplies thanks to a project to help a Boy Scout earn his Eagle rank.
Life Scout Cornelius Mayfield II, 13-year-old son of Dr. Cornelius and Dessie Mayfield of Grenada, is a member of Troop 441 in Memphis and had to complete a public service project as one of the steps toward becoming an Eagle Scout.
He selected Coffeeville Elementary School to benefit from his project because of the needs of the students there. “Ninety-five percent of the students get free lunches,” he said. “And, they were 360th out of 400 schools on their standardized tests.”
Cornelius had to raise money to purchase the supplies that included backpacks, pencils, erasers, folders, glue, pens, crayons, rulers, etc. The older students in the 6th and 7th grades received binders instead of backpacks.
The young Scout put together 400 sets of supplies to cover the 395 students and put everything in boxes. He said that Coffeeville Elemen-tary School Principal Emily Patty helped transport the supplies to the school.
The overall project took six weeks, starting in September and ending October 15 with delivery to the students.
Cornelius has been in the Boy Scouts for two years. He credits much of his success in Scouting to his Scout-master Carlos Tellez and to his supportive family. “It takes us at least an hour and 20 minutes to get there every first and third Saturday of the month,” he commented on the trips from Grenada to the meetings in Memphis.
Travel is also a part of his learning experience in Scouts. “He has traveled to nine states to earn his merit badges,” said his Mother, Dessie.
Now that Cornelius has completed his community service project, the next step toward his Eagle rank will be the Eagle Board of Review consisting of adult members of the scouting program and community leaders. He is expected to appear before that board in February.