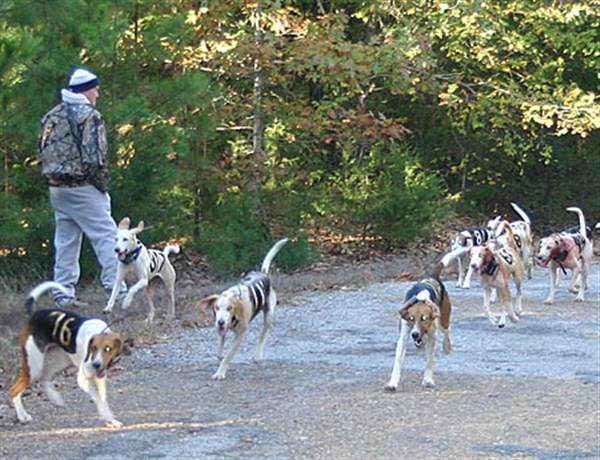 Hunters have traveled to the rural area east of Grenada Lake, known as the land between the rivers, since 1993 to compete in the national fox hunt. This year marked the 92nd annual Chase Futurity and 118th National Field Trials. – Photos by David Howell 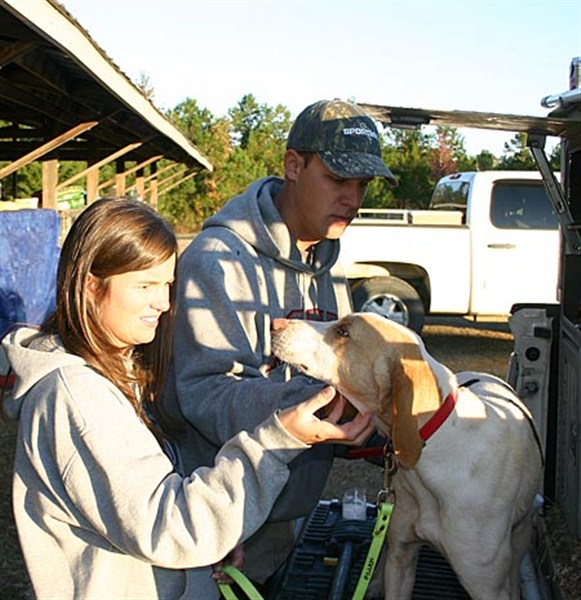 Jack and Audra Allen made the trip from Greenville, N.C. for the week-long hunt. Audra is originally from Gore Springs. 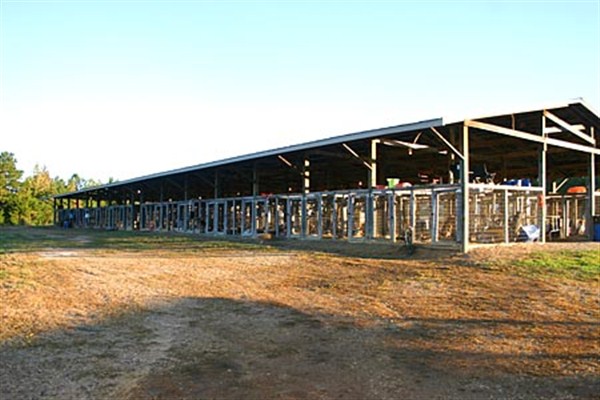 The Mississippi Fox Hunter’s Association has several rows of kennels (above) that can house hundreds of hounds. The kennel is located on County Road 143 in Yalobusha County. 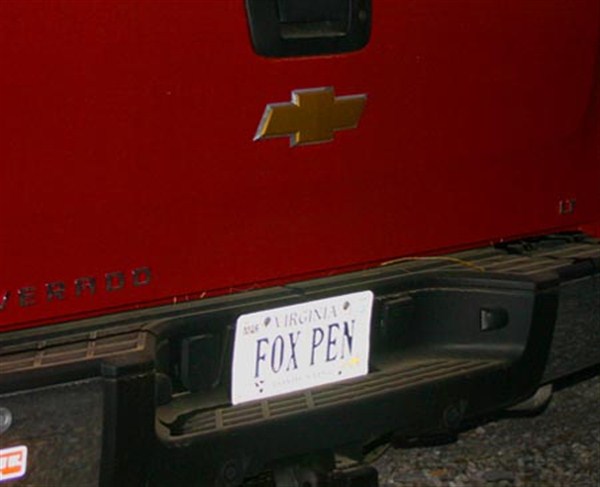 This personalized Virginia tag “Fox Pen” was one of many out-of-state tags at the hunt. 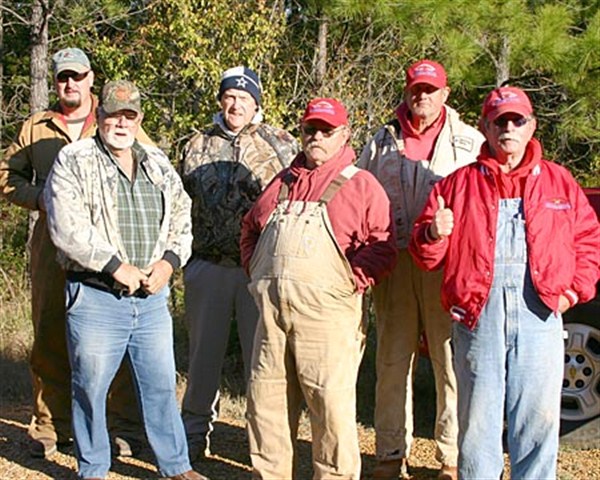 Part of the hunting experience is visiting with old friends. Included in this group, parked alongside a road near Grenada Lake are (front row, from left) Billy Haynes, Barry Frasier and Randy Frasier; (back row) Gaylon Gray, Lane Martin and Paul Peterson.


GRENADA LAKE –  It was a sound like no other at daylight Monday morning as 317 hounds were turned loose to start the 92nd annual Chase Futurity on Monday, followed by the 118th National Field Trial that gets underway on Thursday.
The hunt, or “cast” as the start of each morning’s hunt is called, started in Grenada County at an area known as the horse park. It didn’t take but 10 minutes for the packs to strike and excitement mounted as the hunters waited to see what the first chase of the day would be.
A coyote started to cross one trail – where spectators, a judge and hunters waited –  before it doubled back and crossed a second opening and was verified by another judge, who scored the first of the howling dogs that followed the varmint. A coyote or fox means the pursuing dogs are scorable. If the dogs are spotted trailing a deer, they do not receive points.
In less than an hour’s time, the dogs were scattered across the land between the rivers on the rural east end of Grenada Lake that spans Grenada, Yalobusha and Calhoun counties. The hunters were required to wait 20 minutes after the cast, and then they scattered just as fast as the dogs.
Using GPS and tracking collars, they follow in vehicles and ATVs. The action will be intense for the next five hours – as the hunt starts at first light and continues until noon.
“Monday through Wednesday is devoted to the Chase Futurity, sponsored by Chase Publishing Company,” explains fox hunting enthusiast Gaylon Gray.
The Futurity hunt is for dogs less than two years old, while the Nationals are for the older dogs, Gray adds.
Gray is a perfect guide for the Herald, he has hunted the area all of his life and also judged numerous hunts. Put simply, he knows the hunters and he knows the game crossings.
Following the Futurity hunt, the 118th National Foxhunt will get underway Thursday morning and also spans three days. The hunts moved from North Carolina to Grenada Lake in 1993.
The logistics of keeping score on 317 dogs is mind-boggling, as more than two dozen judges are scattered across the hunting area. Their trucks are plainly marked with red ribbons on the antennas.
Each hound has a number, and the judge marks the first dogs in each race. The hounds are judged in four classes: hunting, trailing, speed and driving and endurance.
If a dog lays down, they will be disqualified from the hunt.
“Probably about 15 percent of these young dogs will receive a strike,” Gray explains. “But during the Nationals, only about six or seven percent will be struck by a judge.”
Mississippi
Hospitality
While a handful of the hunters are local, many traveled to the hunt. Some stay in hotels in Grenada and others rent cabins around the lake from private owners. They spend money in many of the surrounding areas, including Coffeeville in Yalobusha County for gas, meals and other items.
“They definitely do a lot of eating,” Gray reports.
A  huge kennel, owned and operated by the Mississippi Fox Hunter’s Asso-ciation, is situated on 15 acres in Yalobusha County on County Road 143 and serves as the headquarters during the hunt. The kennels will house hundreds of dogs and even horses.
With the kennel located between Coffeeville and Grenada, many of the hunters are familiar with the best eating spots. Breakfast and lunch at the B&B in Coffeeville is high up on the hunter’s list.
A Poplarville, Miss. hunter, Heath Smith, wastes no time bragging on a steak he enjoyed at the Cottage Tea Room in Coffeeville.
“That was as good a piece of meat that I have ate in a long time,” Smith reported.
Later in the morning a Louisiana hunter, Barry Frasier, shares Smith’s sentiment about enjoying a steak at the Tea Room.
“It was the best steak I have had in a while,” Frasier comments before shifting to more serious business.
“In the last eight hunts, we have placed or won, and we are looking for our ninth,” Frasier explains.
Barry and his brother, Randy Frasier hunt big red hounds and are known by fellow hunters as the Ragin’ Reds. They wear red shirts and even drive a red pickup.
Another hunter, Mike Carr of South Carolina estimated an average hunter would drop almost $2000 during the week-long hunt.
“You will find hunters from a lot of different states down here, that’s for sure,” Carr notes.
His comments are backed by the variety of tags on pickup trucks running the roads – Ohio, South Carolina, Texas and the Carolinas, Iowa and even Ontario, Canada.
While most of these folks are hunters, others travel from across the country just to enjoy the experience.
For Harry Cain of North Carolina, the trip marked his first to Mississippi. He made the trip with friend Gary Parker and neither had a dog in the hunt..
“The people down here are nice,” Parker told the Herald.