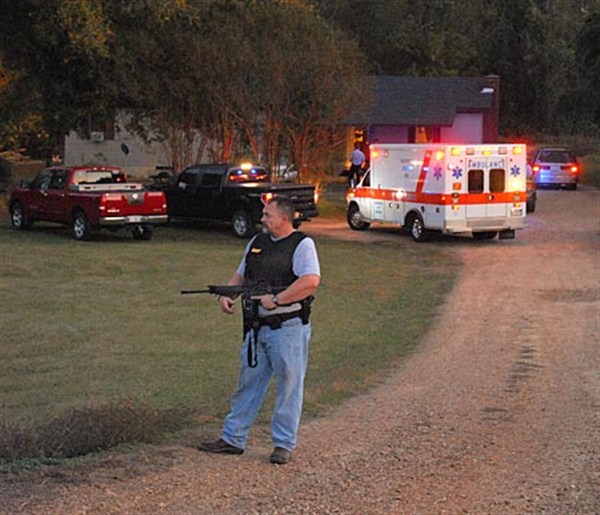 
COFFEEVILLE – A 26 year-old woman was killed Friday night after her brother-in-law allegedly shot her six times with a 9mm handgun.
Sheriff Lance Humphreys reported Crystal Redmon Crump, originally of Chicago, was shot at her residence on County Road 227, outside Coffeeville. There were three children and an adult, in addition to the shooter, in the residence during the incident.
Germaine Crump, 30, was charged with murder and was taken into custody without incident within minutes of the shooting by Chief Deputy Jerry Ferguson, who was first on the scene.
Other law enforcement arrived shortly behind Ferguson and had to work crowd control after approximately 75 to 100 people, mostly friends of the victim, who arrived on the scene shortly after the shooting..
“The whole road was packed with people, apparently bad news travels fast,” Humphreys told the Herald. Crump was immediately transported to the Yalobusha County Jail, as deputies pushed the crowd away from the residence to keep control of the crime scene. Humphreys said an ongoing feud between the two is the apparent motive.
Law enforcement worked into the night and returned the next morning piecing together details of the crime. The gun was not recovered until Saturday morning, according to Humphreys.
“It was well hidden, he initially told us it was behind the house and we spent a good bit of time searching outside the residence for it,” the sheriff stated.
Deputy Coroner Debbie Jackson pronounced the victim dead at the scene. An autopsy was performed Sunday and Coroner Ronnie Stark reported the cause of death was multiple gunshots.
Funeral services will be held at the Mt. Moriah District Association building on County Road 211 on Saturday at 11 a.m. Clark Williams Funeral Home in Grenada is in charge of arrangements.
Crump was scheduled to have an initial appearance Tuesday afternoon. He is being held in the Panola County jail. The Mississippi Bureau of Investigation is assisting the sheriff’s department with the investigation.