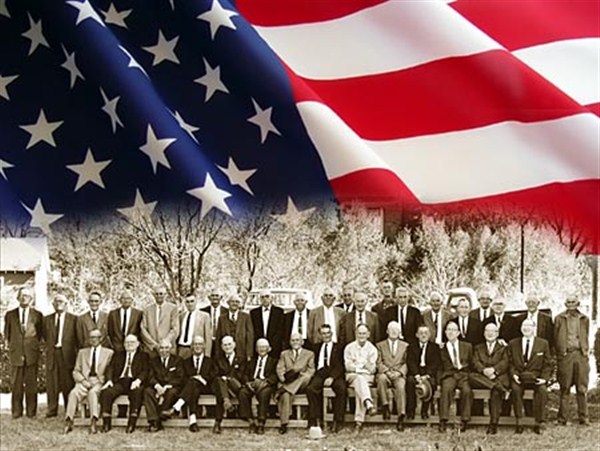 
WATER VALLEY – Thirty years have passed since the “boys” of Battery A, 140th Field Artillery, held their last annual get-together on Veterans Day.
In 1982 there were only ten surviving members of Water Valley’s National Guard artillery battery.
The tradition of getting together on Nov. 11 started 27 years earlier. Arrange-ments were made in 1955 for the first of the annual get-togethers. At that time the members voted that they would continue the tradition as long as any two were able to meet on Veterans Day. But, in 1982 no two of the ten were able to unite.
The history of Veterans Day and the history of Battery A are intertwined as both came out of “the war to end all wars.”
Battery A was organized as a light artillery unit on Feb. 19, 1917. Major William C. O’Ferrall of the U. S. and Miss. National Guard mustered in the new company.
Water Valley had the honor and distinction of having the first organized battery in the state. The Herald reported on Feb. 23 that the new unit consisted of 133 men, 36 horses, four cannons, six caissons, 133 pistols, officer’s sabers, uniforms, camp equipment and miscellaneous supplies.
The city purchased a parcel of land known as the Sam Nation place for $10,000 and presented it to the battery for an armory and drill ground.
Over There
After six months of training and preparation, Battery A was ordered to rendezvous at their armory on Sunday morning, Aug. 5 at 8 a.m. They boarded a train downtown in what is now Railroad Park. Spread along its coaches was a banner that read, “We love Water Valley and we’d like to stay. But we’ve got to go to Berlin with Battery A.”
It would be 1919 before all the men returned. Some carried marks of wounds, gas poisoning and shell shock that would last the rest of their lives.
The local American Legion Post No. 37 is named in memory of Curtis E. Pass, the only member of Battery A who made the supreme sacrifice, just seven days before the Armistice went into effect at 11 a.m. on Nov. 11, 1918.
More might have died if it weren’t for the superior training they received here before leaving for France. The Water Valley unit was assigned to teach other units who were not as well trained. That mission kept them just to the rear of the front lines for some of the fighting.

Veterans Day History
World War I officially ended when the Treaty of Versailles was signed on June 28, 1919, in the town of Versailles, France. However, fighting had ceased seven months earlier when an armistice went into effect on the eleventh hour of the eleventh day of the eleventh month. For that reason, Nov. 11, 1918, is generally regarded as the end of “the war to end all wars.”
In November 1919, President Wilson proclaimed Nov. 11 as the first commemoration of Armistice Day.
The original concept for the celebration was for a day observed with parades and public meetings and a brief suspension of business beginning at 11:00 a.m.
On June 1, 1954, President Dwight Eisenhower signed legislation changing the name of the legal holiday from Armistice Day to Veterans Day.
In 1968 Congress passed the Monday Holiday Law establishing the fourth Monday in October as the new date for the observance of Veterans Day. The law took effect in 1971 and initially all states followed suit except Mississippi and South Dakota. Other states eventually changed their observances back to Nov. 11.
Due to popular pressure, legislation passed in 1975 to return the Federal observance of Veterans Day to Nov. 11.
This year Veterans Day falls on a Sunday, so Monday, Nov. 12, is the federal holiday. There will be a Veterans Day observance in downtown Water Valley at the monument in Railroad Park beginning at 11 a.m.