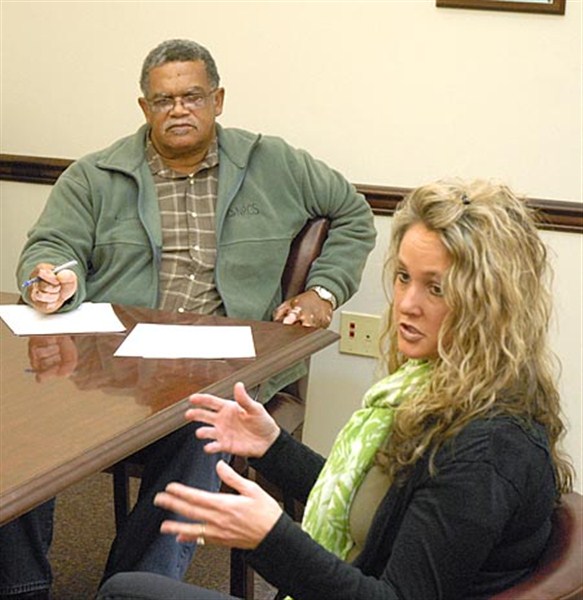 Interventionist Patricia Treloar explained the purpose of her job at Davidson Elementary School to school board trustees at their meeting Nov. 5. One of her main duties is teaching children to read, but she also deals with inappropriate behavior – Photo by Jack Gurner


WATER VALLEY – In order for learning to take place, inappropriate behavior must be dealt with.
That was one of the points made by the Davidson Elementary School Interventionist Patricia Treloar as she explained her role to school district trustees during their meeting Nov. 5.
She said that most people think of an intervention as teaching a child how to read. While that is one of the main things she is doing, she is also doing interventions on such diverse things as how to sit still in class, how to look at the teacher and tell the truth, how to go to the restroom without stopping to play and how to simply walk down the hall.
“We have been doing little bitty interventions and we’ve been doing intensive interventions,” Treloar said.
“I’m not saying that intervention have never been done before. But, they are being done and they are being documented,” she added.
Treloar believes that her work with the younger students now will lead to better grades in the upper levels. “I think we are going to see 90 percent better grades in the third, fourth, fifth and sixth grades.”
She told trustees about one youngster who had discipline problems and poor grades. “Tell me what I can do to help you?” she asked the child.
Treloar said that the child told her he wanted to learn how to read like everyone else in his class. “He was having trouble in math. Think of it, he couldn’t read the math problems. He can’t read the science questions on the science test,” she added. “He was acting out in class because he didn’t want to be there. He didn’t feel very good about himself.”
She said that if a child is in the sixth grade and reading on the second grade level then she is going to work hard to remedy that situation. “I really, really want these children to succeed.”
Pierce Epes commented, “If you catch them there, you can make a big impact on high school down the road.
Superintendent Kim Chrestman agreed and said that he believes two to three years of intervention will lead to a significant increase in test scores and a decrease in disciplinary problems.
Among other actions at the Nov. 5 meeting, trustees:
• Disposed of assets.
• Heard the superintendent’s report from Chrestman. The full text of his report is below.


Mississippi Public Broadcasting provided an “Ed Said” program at DES for k-2 graders on Thursday, November 1st.  This was an interactive program with puppets and characters teaching students nutrition facts.  The students also all received a water bottle upon leaving the program.

The VFW came to DES on Friday, November 2, 2012 to present facts on the United States flag and why we should honor our flag to 1st graders.  The VFW had already came to several other grades and made presentations.

The DES Library will sponsor a book fair November 5-9, 2012. There will be books among other items on sale ranging from $1.00-$15.00.  Grandparents are invited to share this special time with their grandchild/grandchildren by accompanying them to the book fair. Please make sure that grandparents come only during your child’s library time.

Clubs are busy at WVHS engaging in “service projects” as we approach the holiday season.  The Jr. Beta Club is coordinating the food drive on the high school campus for the district wide collection that will be distributed through Compassion Ministries.  The Bible Study Club is collecting boxes, supplies and monetary donations for Operation Christmas Child.

WVHS English instructors, Ms. Murchison and Ms. Koshenina, took Junior, AP Senior and Sophomore Accelerated English students to Ole Miss on Friday to attend a performance of “The Crucible”.  Students read and/or studies aspects of the play in their classes and were invited to attend a stage production of the play.

School Day pictures will be taken this coming Friday, November 9 by Addy Photography.  All students who have their picture taken will be included in the 2012-2013 edition of Valley Views, the school annual.

Basketball season is underway with the Junior High having already participated in some contests.  High School teams opened their season by playing Saturday, November 3rd, in Water Valley.

On October 23, Rodney Francis, Human Resources Manager for Borg Warner, spoke to a group of students assigned to the Water Valley Educational Center.  Mr. Francis informed the students that the decisions they make now will determine:
1.  What you (student) WANT to do
2.  What you (student) HAVE to do or
3.  What somebody else wants you to do

Mr. Francis also encouraged the students to stay in school because in order to enter the workforce they would need a high school diploma or a GED.  He discussed the difference in salaries at Borg-Warner between employees who are temporary and without a diploma and those hired permanently with a diploma or equivalent.  The students were amazed the difference was $5.50 an hour.  He shared a closing quote with the students – “Excuses are the tools of the incompetent”

Progress Reports go home this Thursday, November 8th.  Parents are encouraged to contact teachers for a conference if they have any questions regarding the report they receive on Thursday.

Thanksgiving week comes in two weeks and all students and staff at WVSD are looking forward to this holiday time.  The four weeks between Thanksgiving and Christmas break are packed with planned activities and will be very busy for all.