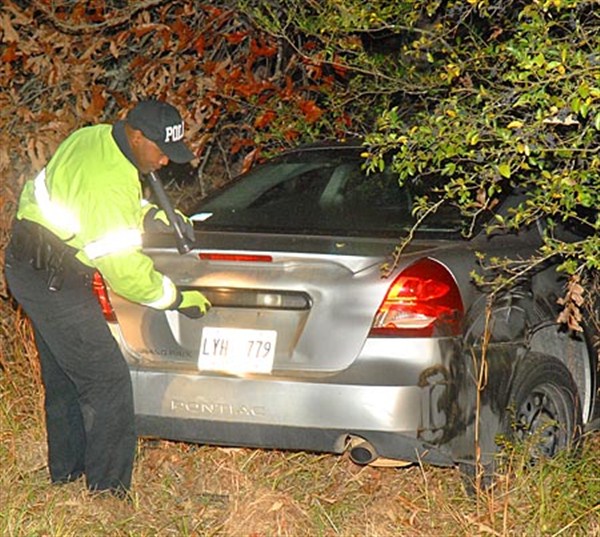 Water Valley Police Officer Luther Folson removes the tag from a vehicle involved in an accident early Wednesday morning. Emergency medical responders were called out just after midnight for a crash involving an 18-wheeler near the Hwy. 7 bypass and Central Street, according to radio traffic. The female drive of this vehicle, which came to a stop in the woods north of the intersection, was treated at the scene. 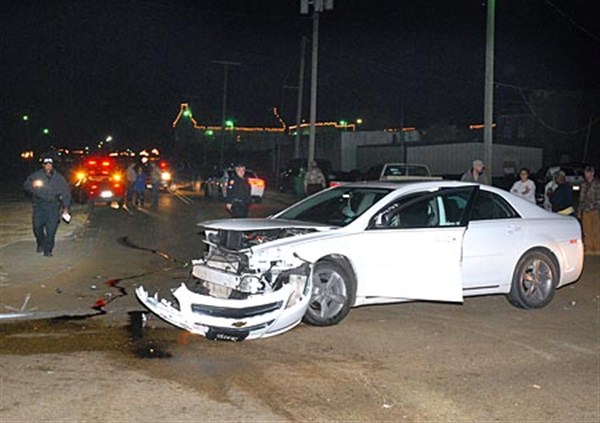 Last Saturday night around 9:30 police investigated this two-car crash at the intersection of Martin and Railroad Streets. A 28-year-old female was transported to Baptist Hospital at Oxford and a teenager was treated at the scene. 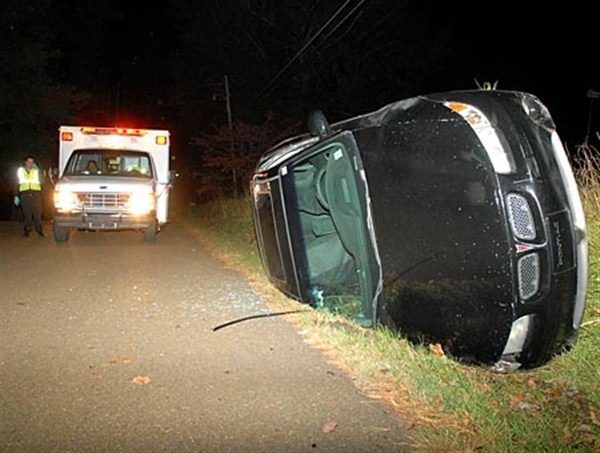 Emergency medical personnel (left) wait to see if they are going to have a victim to treat after a man ran from the scene of an accident in the 1400 block of Boyd Street last Tuesday, Nov. 13. Witnesses said the man was helped out of his vehicle, but then “hit the woods” before he could be questioned by police.


WATER VALLEY – Police are seeking a man who rolled his car on Boyd Street and then ran from the scene after being helped out of the vehicle.
According to police, the 1997 Pontiac left the road in the 1400 block of Boyd Street around 5:30 p.m. Tuesday, Nov. 13, and rolled on its side facing the opposite direction. Witnesses heard the crash and then heard the man calling for help. But, when they helped him out of his vehicle and got him on his feet, he bolted for the nearby woods.
The witnesses gave police a description of the driver and noted that the man’s face was bloody. Officers S. Crenshaw and Chris Blair also found blood at the scene and followed the trail until it ran out.
A warrant for the man’s arrest on a charge of leaving the scene of an accident has been issued. And, he has been cited for driving under suspension and no proof of insurance. Those citations were among the 32 traffic tickets issued during the week.
Chief Mike King reports the following additional law enforcement investigations within the city limits for the period:
• Trespassing on Central Street;
• Telephone profanity in the Berkshire Apartments;
• Attempt to commit an offense/felony on North Main Street;
• Burglary of an auto on Duncan Street;
• Cyberstalking on Cam-pus Street;
• Grand larceny on Black-mur Drive;
• Simple domestic assault on Baker Street;
• Abandoned vehicle on West Lee Street;
• Malicious mischief on South Street;
• Civil dispute at Davidson Elementary School;
• Public drunk on North Court Street;
• Petty larceny on North Main Street;
• Curfew violation at the Crawford Sports Complex;
• Violations of the city dog ordinance on Main Street and on Greer Drive;
• Domestic incident on Blackmur Drive.