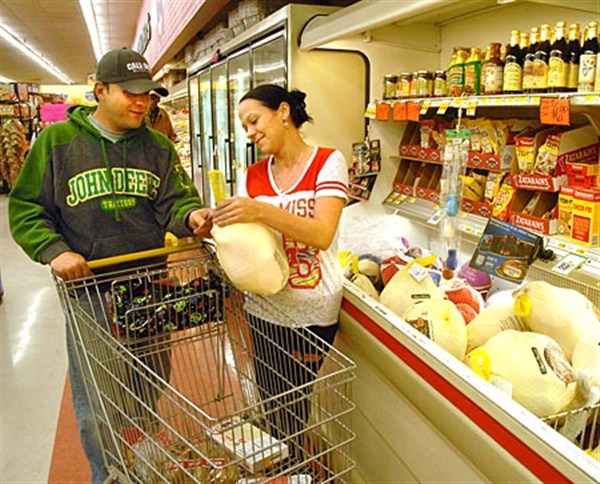 Pricing The Bird – Joseph and Kira Savage of Water Valley price a turkey at Larson’s Piggly Wiggly. Locally, turkeys cost between $.88 and $1.38 per pound, making the price lower that the national average. – Photo by Jack Gurner 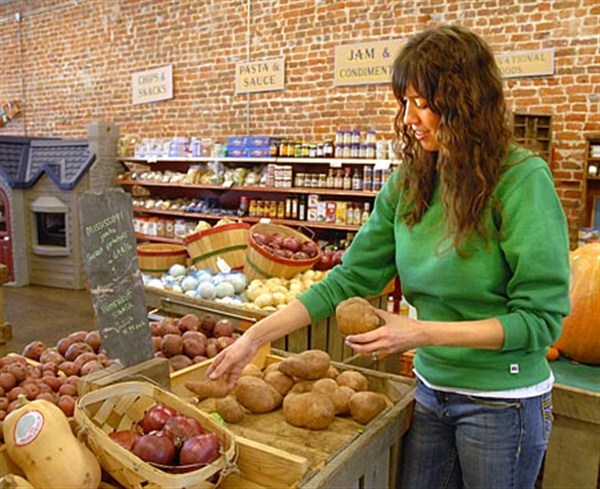 Megan Kingery Patton checks out Mississippi sweet ‘taters at the B.T.C. Old-Fashioned Grocery on Main Street. The popular Thanksgiving side dish was $.69 a pound, beating the national average by $.36. – Photo by Jack Gurner


WATER VALLEY – The cost of a classic Thanksgiving dinner is less locally than the national average, according to figures provided by the American Farm Bureau Federation.
A check of prices at Larson’s Piggly Wiggly, the B.T.C. Old-Fashioned Gro-cery and some discount stores revealed that prices for similar items to those on the AFBF 27th annual informal price survey were generally less across the board.
The AFBF survey shopping list includes turkey, bread stuffing, sweet potatoes, rolls with butter, peas, cranberries, a relish tray of carrots and celery, pumpkin pie with whipped cream, and beverages of coffee and milk, all in quantities sufficient to serve a family of 10.
While not radically different, the classic southern table is set for slightly different tastes. For example, corn bread dressing is more common that bread stuffing. Farm Bureau’s survey menu has remained unchanged since the survey was first conducted in 1986 to allow for consistent price comparisons.
The big ticket item – a 16-pound turkey – came in at $22.23 this year. That is roughly $1.39 per pound. Locally, turkeys cost from $.88 a pound ($14.08 for a 16-pounder) to $1.38 per pound ($22.08 for 16 pounds).
“Most Americans will pay about the same as last year at the grocery store for a turkey and all the trimmings,” said John Anderson, AFBF’s deputy chief economist. He added that there is a higher demand for turkey this year causing a slight increase in price. But, savvy shoppers may pay even less for frozen tom turkey.
“Turkeys may still be featured in special sales and promotions close to Thanksgiving,” Anderson explained. “Anyone with the patience to wait until the last minute to buy a turkey for Thanksgiving could be rewarded with an exceptional bargain,” he said.
In addition to the turkey, a combined group of miscellaneous items, including coffee and ingredients necessary to prepare the meal (onions, eggs, sugar, flour, evaporated milk and butter) increased in price. A dozen brown-n-serve rolls also increased slightly this year, up 3 cents to $2.33. Locally, the price of a dozen rolls ranged from $1 to $1.50.
Other items and their local comparison: 12-ounce package of cubed bread stuffing, $2.77 ($2.56 locally for two 6-ounce packages); three pounds of sweet potatoes, $3.15 (locally two pounds of Mississippi sweet potatoes, $1); and one pound of green peas, $1.66 (locally $1-$1.50).
One item that isn’t less than the national average is whole milk. The AFBF survey showed the average price to be $3.59 per gallon. The local price is $3.99 at most outlets.
Another option for busy families without a lot of time to cook is ready-to-eat Thanksgiving meals for up to 10 people, with all the trimmings, which are available at many supermarkets and take-out restaurants for around $50 to $75. Locally the deluxe turkey dinner is $44.95 and includes green beans, dozen rolls, homemade dressing with giblet gravy, with a pecan or sweet potato pie.
Anderson noted that despite retail price increases during the last year or so, American consumers have enjoyed relatively stable food costs over the years, particularly when adjusted for inflation. While Farm Bureau does not make any scientific claims about the data, it is an informal gauge of price trends nationally.