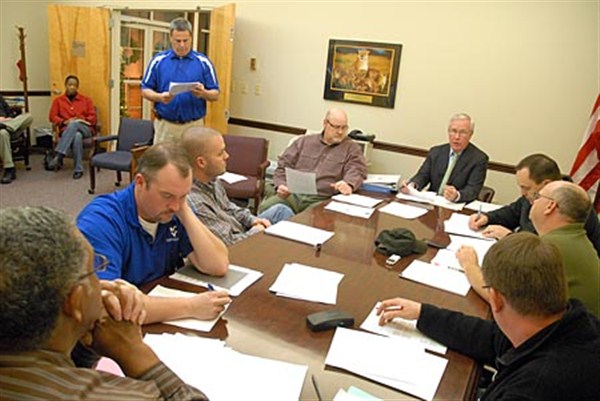 Athletic Director Trey Allman provided Board Trustees with information about a possible soccer program being added to the sports lineup at WVHS. – Photo by Jack Gurner 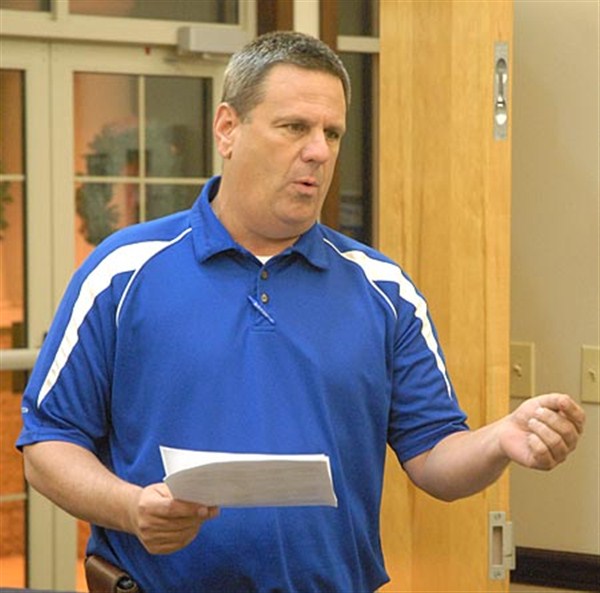 
WATER VALLEY – The “fastest growing sport” could be added to the school district’s lineup of athletic programs if the details can be worked out.
Athletic Director Trey Allman appeared before district school board trustees Tuesday, Nov. 27, to “start the conversation for planning for the addition of soccer.”
Allman explained that a recent survey of 7th through 11th grade students showed 32 boys and 31 girls were interested.
He noted that seven boys were already playing on organized teams. “No girls,” Allman said. But, he added that people involved in the summer program said that girls were participating up to their age limit, which is 12.
School officials contacted the state board of education and were told that both a boys’ and girls’ program would be required under federal guidelines. “Cheer would not be counted as part of Title IX requirements,” said Allman.
To help with costs, members of the community have said they would help subsidize the purchase of uniforms. And, games could be played on the city-owned fields in the Crawford Sports Complex.
“I don’t have all the answers right now,” Allman said. “I know there are a lot more questions coming.”
Both a boys’ and girls’ coach would have to be employed by the school district and that would require a $2000 supplement and 23 additional contract days. Another possibility would be the hiring of a paraprofessional coach.
With the addition of two sports teams in our school district, Allman continued, the positive is that it would increase the opportunities for student athletic participation in a sport that is growing.
Among the issues that will have to be addressed, according to the athletic director, is finding additional qualified coaches, having enough school administrative personnel to supervise games and asking the community to support two new teams.
“They do a great job of supporting us and no doubt they will,” Allman said of the current level of community support.
The impact on other sports will also have to be considered, he said. “Some athletes are going to have to make a decision. They aren’t going to be able to do both.”
Board President Lamar Burgess said he believes a soccer program would expand the opportunity for some students who might not consider going out for football or basketball. “This community has been supporting soccer for a number of years.”
“If our community has a strong interest in it,” added Trustee Casey Washington, “I think we need to do whatever we can to support it.”
Allman said the next step is approving the coaching positions and then trying to fill them.
Trustee Pierce Epes expressed concern over adding yet another set of additional duties to school administrative personnel. “They do a lot right now.”
Allman said that there were two members of the community present who would like to speak at the proper time. Trustee Taylor Trusty asked the pair, Jeff Bynum and Lance Clement, if they had anything they would like to add.
Bynum said that he and Clement were there just to show their support. “We know there is real interest for this,” he said and added that soccer is the fastest growing sport in America.