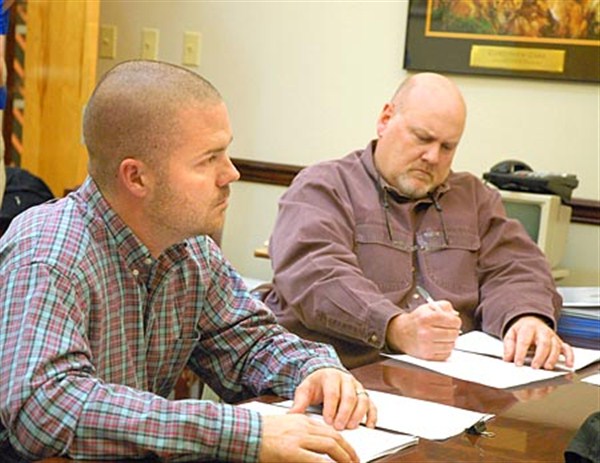 Newly elected trustee Chris Terry (left) sat in on the meeting although he won’t take office until January. He will replace Dr. Steve Edwards (right) whose term expires.


WATER VALLEY – Students in the local school district have shown little interest in preparing for the ACT based on their low participation in test prep events.
That information came to light during the Nov. 27 school board meeting after Trustee Taylor Trusty asked if it would be possible for the school to host a test prep course. Trusty said that he had been asked that question by a parent who was sending their child elsewhere to a course sponsored by Northwest Com-munity College.
WVHS Principal Dr. Glenn Kitchens said that the school had held the courses in the past with no students or very few attending, which did not make it feasible for the adults who held the courses. “For the most part it ended up being a wash.”
He noted that since that time, NWCC has been holding regular courses in Senatobia and Oxford a few weeks before the ACT. “But,” he said, “those are very expensive.”
“The kids who go seem to do well,” he added. “But, there is low participation from here.”
Kitchens said that for about three years the school also tried having five teachers – one from each of the major subject areas – hold sessions on the six Wednesday afternoon’s leading up to the testing date. “We initially did it after school on Wednesdays with very little if any participation most of the time.”
School officials then tried adding a session in the middle of the day in addition to the after school session because of the number of juniors and seniors who had to leave. “We just couldn’t get the participation for the adults to invest that amount of time for something that was not beneficial to anybody,” said Kitchens.
Currently the school posts an ACT question of the week every week on Monday. The students have to turn in the questions by Thursday. “The participation in that is, quite frankly, not very high,” he said of the 20 or less questions that are turned in.
“It is the very first announcement every day. Every single day.”
Kitchens said he would have the guidance councilor take a look at having NWCC come and do a prep session. “But, I did want you to know about the things that we try to do with very little or no participation.”
Among other actions at the Nov. 27 session, trustees:
• Paid claims and heard a financial report from District Business Manager Randy Goodwin.
Goodwin told the board that the all-important fund balance in district maintenance as of Oct. 31 was $1,642,749.86.
He said that auditor Brent Ballard of Fortenberry & Ballard PC would appear before the board at the final meeting of the month to discuss the most recent audit.
• Heard from Superintendent Kim Chrestman that the state board of education had initiated an administrative procedure acts process to establish a state board policy on conversion to charter schools.
Chrestman said he believes the action is a preemptive policy change by the Department of Education to get ahead of the Legislature.
The policy would allow a chronically under performing school district in their third consecutive year as a failing school to petition for conversion to charter school status.
The petition and conversion plan would have to be approved by more than 50 percent of the families of the students enrolled in the school district and by the school board. No charter school would begin operations prior to July 2013.
State school officials expect legislation during the new term in January to implement charter schools. Chrestman added that the State Department of Education would not be the agency over charter schools. Instead, a board appointed by the governor and lieutenant governor would oversee the schools.