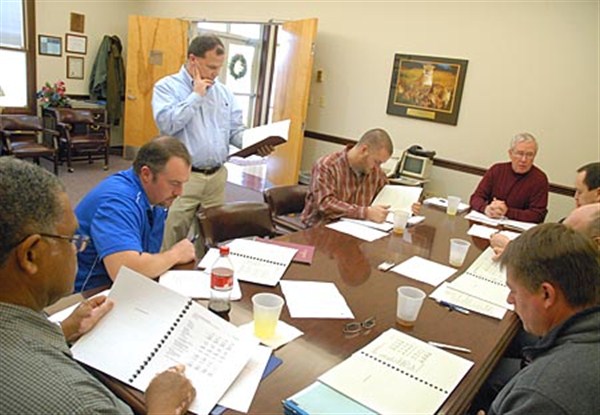 Brent Ballard (standing) of Fortenberry & Ballard, PC goes over figures from the latest audit with school officials during a school board meeting Dec. 20. The district’s finances were given a clean bill of health for the third year in a row. – Photo by Jack Gurner


WATER VALLEY – For the third year in a row, auditors have given the local school district a clean bill of financial health.
Brent Ballard of Fortenberry & Ballard PC appeared before the school board Thursday, Dec. 20 to present the audit results for the fiscal year ending June 30, 2012. “It’s what we call a clean opinion…an unqualified opinion,” he said of the district’s financial statements.
Ballard explained that as part of the financial audit his company did a review of the district’s federal program compliance. “We focus on different programs from year to year. This year we focused on food service and the Title I program,” he said, adding that those programs received a clean opinion as well.
He did note there was one finding in food services caused by a computer crash during the audit period and added that it was just a matter of documentation to back up the food service inventory.
Ballard said that one area that he likes to discuss with the board is the general fund. “Basically it’s a combination of your district maintenance operating account and the activity funds.”
“The board and the superintendent are to be commended,” he said. “Everyone who has had a part since 2009 forward. It’s been quite a turnaround.”
Ballard added that the past several years had been difficult because of a reduction in state source funds, which had gone down $200,000 since 2009. “You’ve had to make some tough decisions in those three, four years.”
“You see the bottom line down there,” he continued. “Your fund balance in the general fund has gone in ‘09 from a negative $300,000 to now, a positive $2 million. That’s a strong, healthy financial picture.”
Financial Downturn
In October of 2009 State Superintendent of Education John Jordan ordered local school officials to cease all expenditures after receiving an audit report that showed the district in the red. At the same time, he appointed a financial advisor to the school district who had the authority to approve or disapprove all expenditures.
In a letter dated Oct. 23, 2009, the state superintendent wrote that his office had received the audit report for the 2007-2008 school year reflecting a negative fund balance in the general fund. “This constitutes a serious financial condition,” the letter continued. “I am officially notifying you to cease all expenditures.”
The letter came as a surprise to school district trustees who began to demand detailed monthly financial updates at school board meetings. They also asked their auditors to present an in person report.
In 2010, school officials brought the fund balance up to a positive $255,000. In 2011 it was $1.3 million and this year $2.2 million.