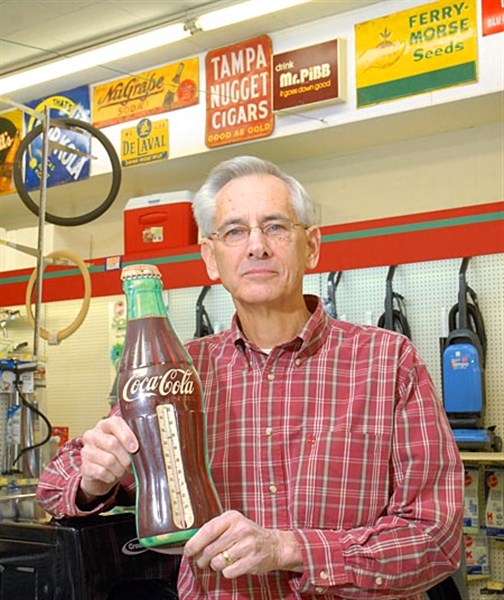 Longtime Water Valley businessman Jack Sartain displays a Coke thermometer, one of the many memories he has collected over the past half a century. Sartain has sold his TrueValue store to employee Joey Hastings and is retiring. – Photos by Jack Gurner 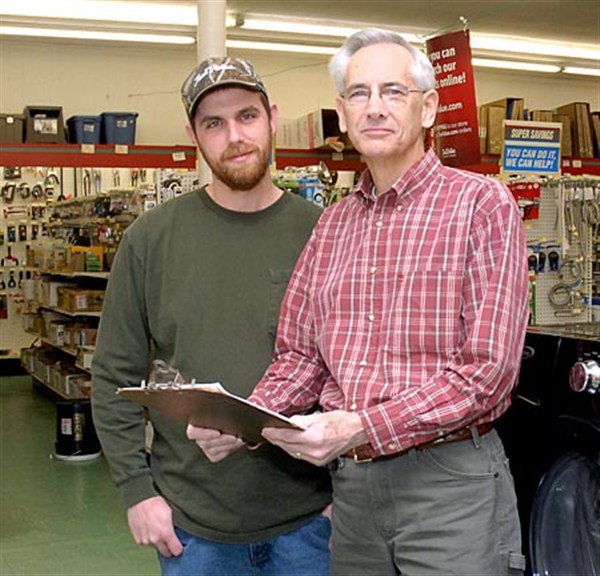 
WATER VALLEY – After almost half a century of doing business on Main Street, Jack Sartain is about to take on a new challenge — retirement.
The long-time owner of Sartain’s TrueValue Hard-ware has sold the business to employee Joey Hastings, who plans to continue the store’s tradition of quality merchandise and well-known customer service.
“Lots of folks know Joey,” Sartain commented on the new owner, who has been with the business full-time for the last ten years. Hastings began to work there part-time when he was just 14-years old and stayed through his high school years, much as Sartain did decades earlier.
After graduation, Hastings went to Northwest Community College where he studied tractor mechanics all the while working part-time at Sartain’s. After completing the course, he worked briefly as a mechanic in Batesville before returning full-time at Sartain’s in 2002.
“He’s been an extremely valuable employee,” said Sartain. “My last ten years would not have been nearly as easy if I hadn’t had Joey.”
There is not much around the store that Hastings can’t do, according to Sartain. “Lots of times when the phone rings they ask for Joey. They don’t ask for me,” he said with a grin.
The local hardware store has not only managed to stay open, but has grown while other similar businesses around the country have closed their doors. There are multiple reasons for the store’s success, but Sartain believes that one of the most important is the ability to meet the needs of their customers.
“One thing that we’ve been able to do along with other local hardware stores that have stayed in business is we’ve been able to give service to the customer,” Sartain continued. “We wouldn’t be here if it wasn’t for the good, loyal customers who have traded with us over the years and put their trust in us.”
Sometimes the Sartain brand of customer service doesn’t result in a sale. Recently a customer had a plumbing problem and wanted to buy a drain cleaner product. After she described the problem, Sartain recommended a plumber.
She left without purchasing anything, but had a better solution to her stopped up drain.  “But, that’s okay,” he said. That’s something I’ve always been happy I could do is help someone solve their problem whether they need to buy something or not.”

Hardware History
Sartain’s father, Dale, bought the local Western Auto store from Mary Miller Suratt almost 50 years ago in August of 1963. Sartain was a student at Water Valley High School at the time and began his retail career working on and off in the store.
He continued part-time through his college years at Mississippi State. After college, Sartain spent two years in the Army, including a tour in Vietnam. He married wife, Judy, in June of 1971 and after she graduated from MSCW in May of 1972, the couple moved permanently to Water Valley.
The business moved from its original location on the corner of Main and Wagner Streets to its present location at 421 North Main in 1976.
The store continued under the Western Auto name until 1978. “We became, more or less, an independent hardware store and affiliated with one of the major coops,” Sartain said. “Fifteen years later we became a TrueValue store.”
Sartain said that the nature of the business changed over the years. “We kind of moved away from the Western Auto type of business, more into a hardware, major appliance and furniture operation.”
The reason for the change was to meet the needs of the customers, he added. “In order to meet those needs we began to add other types of merchandise to our business.”
Early on the store was pretty heavy in automobile related merchandise, said Sartain. They began to phase out the auto merchandise as well as the bicycles and toys in the early 1980s. It was at that time they began to add the furniture, appliances and electronic items.

Assembly Included
During the early years, Sartain worked with his older brother, Jimmy Dale. “Mostly what we did was assemble things,” he said. “Riding toys, bicycles – things of that nature were a big part of the business. So, we were just about always putting together something.”
One of the items Sartain would happily forget is a very popular riding toy called the Big Wheel. He and his brother would argue over whose turn it was to assemble the next one. “We would rotate. He’d put one together and then I’d put one together. They were pretty difficult. It wasn’t a chore we looked forward to.”
But, something Sartain did look forward to was making deliveries. There were certain customers – especially some of the older ladies – who would have a piece of cake or pie waiting, he said. “You got to where you looked forward to going out to certain people’s homes because you knew you were going to get a treat when you got there. And, a lot of them you just enjoyed visiting.”
Sartain fondly remembered one family from the Paris community with a pitcher pump on their back porch. “When I made a delivery to them, I’d always get a good, fresh drink of water out of that pump.”
“It’s a little different nowadays. It seems like we’re all a little bit busier. We don’t have the relationships we had with that generation that’s mostly gone on now,” he said.
Those delivery visits also helped Sartain develop an interest in old items found around home places and early businesses. The store’s office and the walls just above the merchandise are covered with antiques of all types ranging from tin signs to bottles.
He held up an old Coke thermometer that he saw hanging on the outside wall of one home. “I told the lady that if you ever want to sell that, let me know.”
Now that he has some free time, Sartain hopes to sort through his collection and display it where others can enjoy it.