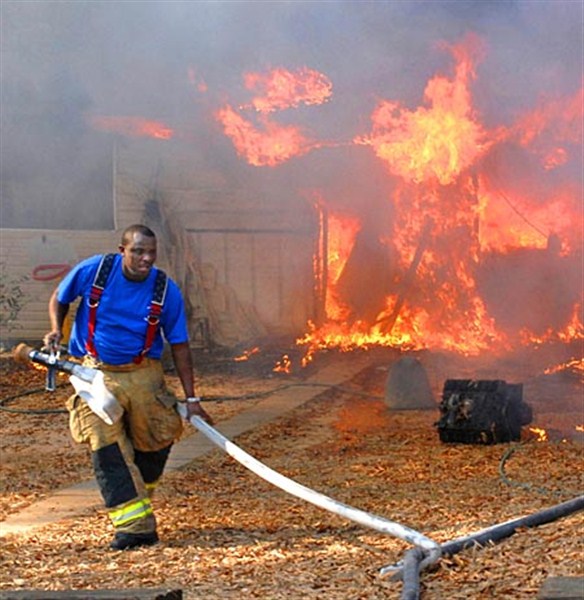 Sherman Gooch has worked 17 years for the Water Valley Fire Department and was promoted to chief after Michael Defer retired. Here Gooch is seen in a familiar role pulling hose to make an “initial attack” on a house fire. – File Photo 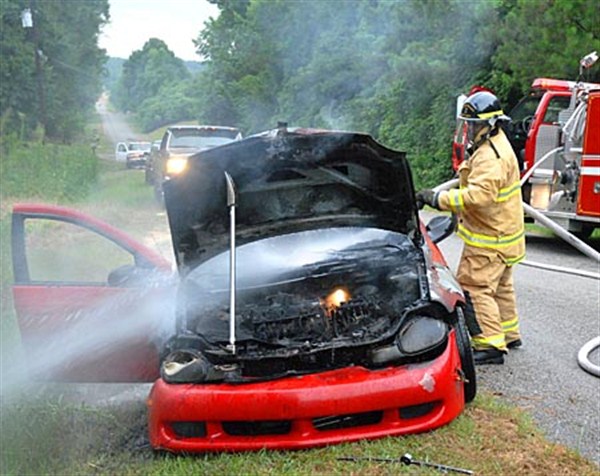 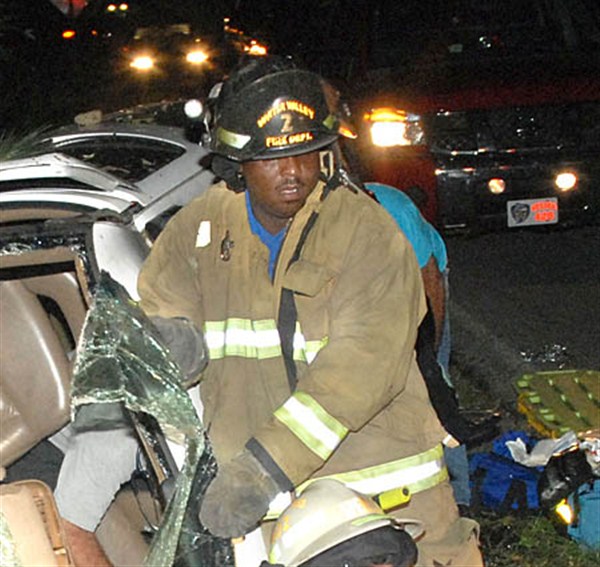 Also part of the fire department’s duties is rescue. Here Gooch helps other emergency responders remove a victim from a crashed automobile. 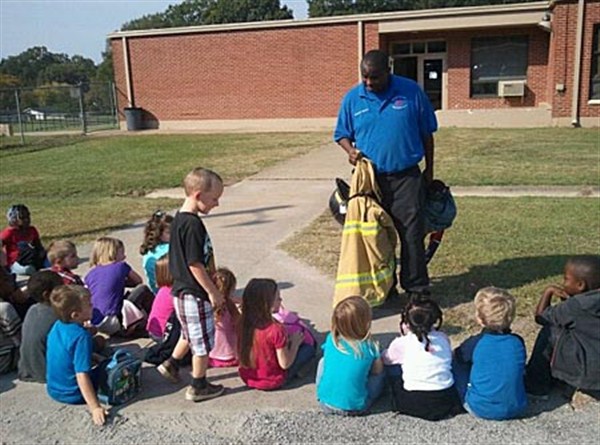 Gooch is shown here telling the kindergarten youngsters at Davidson Elementary School what firefighters do. He explained about how to dial 911 and gave them some safety tips. – Photo by Amanda LaCook Bennett


WATER VALLEY – The city’s fire department has a new leader, the first African-American to head a major municipal department in Water Valley’s city government.
Captain Sherman Gooch, a 17-year veteran of the department, was promoted to Water Valley Fire Chief during the regular monthly meeting of the board of alderman Jan. 2. Gooch will replace Michael Defer, long-time chief, who will retire effective Jan. 31.
“We are pleased to have had Chief Defer with us these years,” Mayor Larry Hart said. “He’s done a good job and we appreciate his effort over the years and we wish him the best in his retirement endeavor. With envy we see him go.”
Although Gooch will officially take over Jan. 31, he has been handling the day-to-day operations of the department since the end of December. Defer has been taking unused vacation time since Christmas.
At press time Tuesday, Captain Gooch was out of the fire department dealing with a family medical issue and not available for comment. The Herald plans an in-depth story on the promotion in the future.
Among other actions at the Jan. 2 meeting, aldermen:
• Heard a report from Water Valley Main Street Association Director Mickey Howley, who told aldermen that the recent retail “shop Water Valley late” promotion was a success. “The merchants I talked to by and large did better than the season before. They seemed pretty pleased with sales and they were up this year over last year,” he said.
Howley also talked about applying for a Mississippi Development Authority creative economy grant to assist with the pocket park project on the currently empty property at the corner of Main and Wagner Streets. The $4800 grant would be used to purchase movable fixtures that can be used in the park and then be reused elsewhere.
The board voted to provide a memorandum of understanding to the WVMSA to allow the organization to request the grant and complete the project.
• Accepted the bid from Mechanics Bank to be the city’s depository. The local financial institution was the only bidder and offered an annual percentage yield of .75 percent.
• Took under advisement culvert bids until next months meeting.
• Authorized the electric department to write off $7882.72 in delinquent accounts.
• Approved estimates for work on the T-hanger at the airport in the amounts of $78,539.22 for the contractor, Wright Steel Erectors, Inc. of Clarksdale, and  $3296.50 for the city’s engineering firm, Willis Engineering.
• Were informed that the city will take a holiday for Martin Luther King Day on Jan. 21.
• Entered executive session at 6:41 p.m. to discuss the resignation/retirement of Fire Chief Michael Defer, effective Jan. 31, and the hiring of Captain Sherman Gooch as his replacement.
• Returned to regular session at 6:55 p.m. after meeting in executive session for 14 minutes.
• Adjourned at 6:57 p.m.