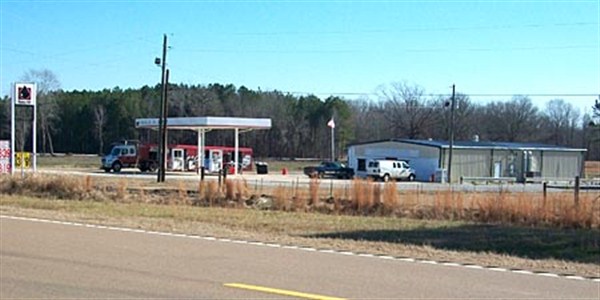 
BENWOOD – The beer is not moving off the shelves at the county-line store on Hwy. 330 after the sheriff’s department arrested the store operator twice in one week.
Musid “Mo” Ali, 41, was arrested January 9 after deputies served an arrest warrant for loud music at Double L Depot, according to sheriff Lance Humphreys. Ali was also charged with carrying a concealed handgun. He bonded out the following day and returned to the business.
On Friday, January 11, the department received another complaint about loud music and returned to the business located at the Calhoun/Yalobusha county line.
When deputies arrived that night, Humphreys reported the doors were locked and there were almost a dozen customers inside in what the sheriff described as a “juke joint.”
“The deputy asked him if was armed, and Ali said no,” Humphreys said.
Ali consented to a search and deputies found marijuana in his pocket, triggering the second arrest. A search of the business also revealed a slot machine, bringing an additional gambling charge, according to Humphreys.
Both times he was arrested, he was also intoxicated according to Humphreys.
The sheriff also told the Herald he had warned the store owner, Lynn Parsons, that Ali could not continue selling beer using the beer permit the county had granted Parsons when the store originally opened. The verbal warning was given on January 7, two days before the first arrest.
“Ali had applied for his own permit and indicated that he would be taking over the entire operation from Parsons, which gave us the legal authority to halt the beer sales until he obtained a permit,” Humphreys explained. Ali had already obtained a beer permit from the state.
Although many of the people inside were drinking at the time of the second arrest, the sheriff said charges were not filed because Ali denied he  sold the alcohol.
“The people inside gave statements that they had brought their own beer,” Humphreys said.
Troopers and Calhoun deputies also assisted in Friday’s operation, which had been planned before the complaint of loud music.
“We already had several driver’s license checkpoints scheduled  in the area as the weekend started,” Humphreys explained.     “And we told Ali to turn off the music, but he wouldn’t listen.”
For the store’s closest neighbor, the arrests will hopefully end almost six weeks of problems stemming from the operation.
“The loud music was the main thing,” Quinton Boyle told the Herald. Boyle lives on Hwy. 330, across from the store and described the misery.
“Before (Ali) the store was closed by 7 or 8 p.m. We never heard a peep out of the store,” Boyle said.
“It has been awful since late November,” Boyle added. “The drunker he would get, the louder the music would get.”
Boyle has recordings and photos of the music and activities at the business. He also signed an affidavit for disturbing the peace, prompting the first arrest, and called the sheriff’s department numerous times prior to signing the affidavit.
Humphreys said deputies had  responded to the establishment a half-dozen times. The sheriff said the music had been turned down when deputies arrived but said a complainant’s video and affidavit was a big help in the case.
After the first arrest, Boyle said he hoped the problem would end. Instead, he said the music came back on and got louder the next night, and the next night, prompting him to call the sheriff’s department and report it again–triggering the second arrest.
Boyle said both customers and Ali have harassed him, shouting obscenities from the parking lot and even pulling up in his driveway.
Last Friday, Boyle said an agitated, intoxicated hollered across the parking lot.
“He hollered ‘?@!$ you, !#@!#$!$, this is my store. I do what I want to in my store and there is nothing you can do about it,’” Boyle said.
“I called the sheriff’s department and they arrived in numbers.”
Boyle said the incident has been a “nightmare, and families in the community have banded together to demand the sheriff’s department take action until “this community is free from the Double L Store all together.”
At presstime Tuesday, Ali remained incarcerated in the Yalobusha County jail.