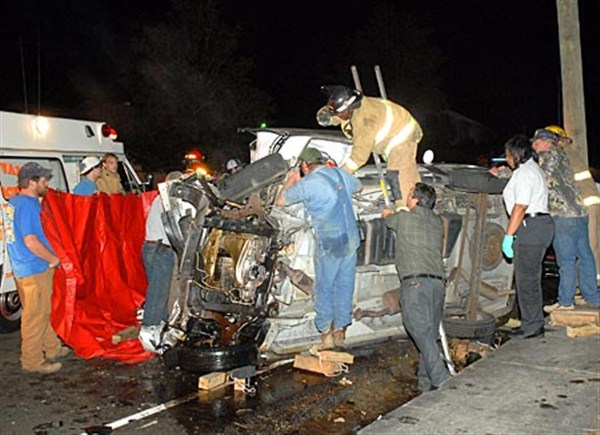 Two people were killed and a third seriously injured when a small pick-up truck and a van collided on Blackmur Drive west of the South Street intersection sometime after 7 p.m Friday. Emergency responders were called out at 7:10 and immediately called for additional rescue equipment and manpower to help free the victims. Dead are Hailey Marmino, 18, of Batesville, driver of the pick-up, and Geneva Hervey, 48, of Water Valley, a passenger in the van. – Photos by Jack Gurner 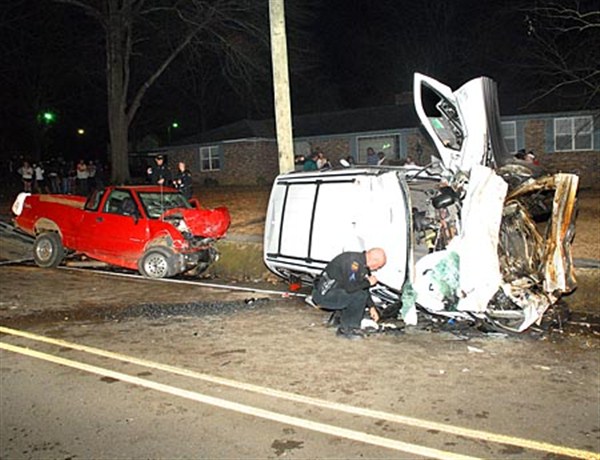 
WATER VALLEY – Two people were killed and a third seriously injured when a small pick-up truck and a van collided head-on Friday evening on Blackmur Drive.
Hailey Marmino, 18, of Batesville, driver of the pick-up, and Geneva Hervey, 48, of Water Valley, a passenger in the van were dead at the scene. Goldie Hervey, driver of the van and brother of the victim, was severely injured and flown to the Regional Medical Center in Memphis.
Coroner Ronnie Stark pronounced both victims dead on the scene. Stark said cervical spinal trauma was the cause of death for Marmino. Blunt force trauma to the head was the cause of death for Hervey.
Residents of the area just west of the South Street intersection described the crash as sounding like an explosion. The impact was in the eastbound lane, indicating the pick-up left the westbound lane and struck the van, which ended up on its side facing the opposite direction.
Emergency personnel responded at 7:10 p.m. and called immediately for additional rescue equipment and manpower to help free the victims. The smell of vehicle fluids mixed with gas filled the air and firefighters were concerned the van could burst into flames.
Emergency medical responders stood on the van’s side as firefighters forced the driver’s door open. It took about 45 minutes to free Goldie Hervey and transport him to the helicopter landing site set up on the old Bondafoam property across from BorgWarner.
A crowd gathered during the rescue operation and some comforted relatives of Geneva Hervey as they arrived at the crash site. On Sunday, friends of Hailey Marmino placed flowers and notes on the telephone pole where her Red 1998 Isuzu pick-up truck came to rest.
In other law enforcement news, the three men wanted for the shooting of Latonya Carr are expected to face murder charges after the victim of a New Year’s Eve shooting died Jan 8.
Warrants have been issued for Spencer Tyrone Morgan, 40; James Johnson, Jr., 25; and Kevin Eugene Kelly, 34, according to Police Chief Mike King. Kelly and Johnson have Water Valley addresses, but Morgan has an Oxford address.
Residents of the 200 block of Fly Street found Latonya Carr seated in his blue and white pickup truck with multiple gunshot wounds to the head. Residents said they didn’t react to the loud bangs immediately because youngsters had been shooting fireworks just a short time before.
Stark said Carr was pronounced dead by a doctor at the Med in Memphis at 3:30 p.m. on January 8. His body was transported to Jackson for an autopsy. Hodges Funeral Home is in charge of arrangements.
Carr, 33, has a Batesville address, but is believed to have been residing in Water Valley at the time of his death.

Suspects Caught
Federal marshals captured two men, Keith Baker, 45, and Robert Carter, 45, last Thursday evening in Memphis. The pair was being sought in connection with a kidnapping that occurred late Tuesday or early Wednesday of that week.
The victim was abducted from her home in Water Valley and found in Lafayette County still bound. Chief King said that the motive was robbery. The victim is believed to have known at least one of her kidnappers.
Chief King said anyone with information about either of the crimes is urged to contact the Water Valley Police Department at (662) 473-2933.