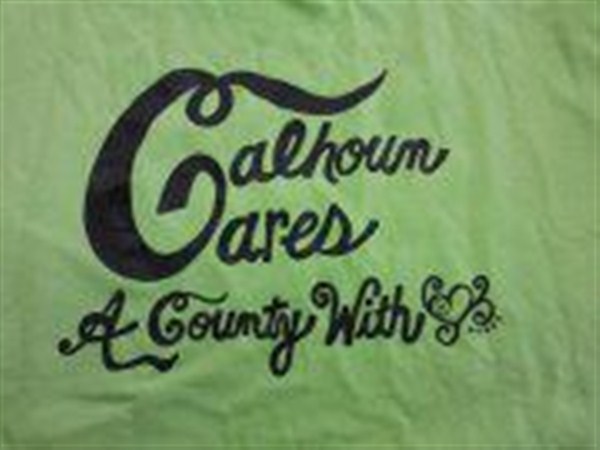 
BRUCE – Grassroots fund-raising is becoming more popular nationwide and a good example is located right next door in Calhoun County.
The term grassroots fundraising is defined as “an effort that derives most of its power and reason for being from a community and from ordinary people.”
That definition fits the Calhoun Cares organization, which was started in 2011 by Priscilla Melton, a cancer survivor who had served as chairman of the Relay for Life in Calhoun County.
Tammy Tallant took over as president of Calhoun Cares when Melton, her best friend, died last year. Tallant said that Melton wanted to start an organization “where we raise money and the money stays in the county for our patients.”
Tallant is passionate about helping cancer patients in her county. “People here are dying. You wouldn’t believe the people I starting helping who die before I reach the limit of what I can do for them because they are so sick,” she said. “Since I have been doing this, I’ve lost 11 clients to cancer.”
“They can’t pay their bills,” she continued. “I had one girl who had to go 33 straight days to therapy. People don’t have the money for that.”
Tallant said that is where she and Melton saw the need. “We can help people right now who are suffering who need the help …now.”
Along with losing her best friend, Tallant has also seen four other classmates from the Bruce High School Class of 1983 die of cancer. There are also two or three cancer survivors in the class.
In order to be eligible for help the patient must live in Calhoun County and currently be undergoing cancer treatments. At present, the group is giving up to $400 per year per patient in gas vouchers to cover the costs of travel to and from treatments.
There are about 30 people being helped right now, with room for more. One of the problems faced by her group is finding people to help, said Tallant. “People seem to be too proud to ask. They’re like, ‘somebody else needs it worse than I do.’”
The group’s nine-member board of directors is meeting this week to discuss how to reach more people. “We’ve got the money. We just need people to assist, she said. “We’ve raised about $38,000.”
Tallant doesn’t believe that money raised should just sit in the bank. “If you raise $30,000 this year, you need to give $30,000 away,” she said. “Raise it and give it.”
That money will stay in county because the group is all-volunteer and almost everything they need is donated. “When we give them those gas vouchers they are spent in this county. Our money stays here. It helps our economy and our towns.”
The group is planning their next fundraiser, a beauty review, for February. In the future, the group hopes to additionally offer utility assistance and help with medications.
Tallant warned that starting a non-profit organization like Calhoun Cares is not an easy task. “The paperwork was horrendous. It’s a lot of work and a lot of dedication. It takes the right person to be able to do it.”
And, Tallant didn’t think she was the right person for the job. But, her friend did. “Prescilla told me that I was the only person who would keep this going if something happened to her.”
The people of Calhoun County have been very supportive of Calhoun Cares, according to Tallant. “We are a very, very giving county.”
Cancer patients who live in Calhoun County can reach Tallant at (662) 983-0864.