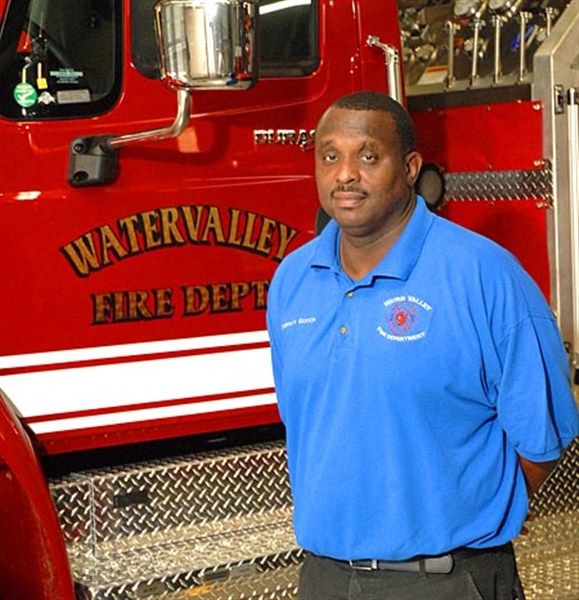 
WATER VALLEY – Sherman Gooch will take over as the city’s fire chief on Feb. 1. But, for the veteran firefighter, the new job is just a continuation of service to the citizens that began almost 17 years ago.
His career with the city started in 1996 when he began working for the water department. The next year he transferred to the fire department where he has worked since as a fireman/dispatcher. He was promoted to captain around the end of 1999.
One of Gooch’s first challenges when he takes over officially on Feb. 1 is manpower. The department needs eight people to operate at full staff. Gooch has five, including himself. And, he learned last week that one of those five is leaving for another job.
Because firefighters also work as police and fire dispatchers, having enough people for the job is even more important to the city’s safety.
Gooch is responsible for training the dispatchers and he emphasizes the need to be considerate to those who call 911. “I always think, what if that were me on the other end of that line. I wouldn’t want someone not handling my situation professionally. It’s always about the citizens with me.”
During his time with the department, Gooch has gained quite a following with the students at Davidson Elementary School. At DES he talks about fire safety and lets the youngsters get a close-up look at the fire truck. “That’s one of my favorite parts of the job is dealing with the kids,” he said with a smile. “
Gooch added that his niece, who is four and in daycare, told her Mom that when she grows up, she wants to be a fireman like her Uncle Sherman.
Some of the big fires he has worked include Bondafoam, and the two downtown fires, The Crafters’ Mall and Copperhead Antiques.

Dangerous Job
But, it is not the big fires that are always the most dangerous, according to Gooch. He remembers going back into a house after a fire to retrieve a family bible at the request of the owner. “I reached up to get the bible and the house made a cracking noise. A claw-foot, cast iron tub fell through the ceiling. I just barely made it through the door. A two-by-four hit me on the back,” he said.
One episode that he considers “water under the bridge” is the 2003 lawsuit filed against the city by five members of the department claiming unfair labor practices. The suit was settled in 2007 and the city paid $100,000 and instituted a new work schedule as requested by the firefighters.
Gooch, who turned 40 on Dec. 22, grew up in a single parent family. He credits his mother with making sure he stayed out of trouble, kept up his schoolwork and helping him grow into the man he is today.
“She was tough on us,” he said of the way his mother raised him and his brother, Jermaine, an investigator for the Yalobusha Sheriff’s Department.
Gooch graduated from Water Valley High School in 1991. He briefly attended electronics training school after graduation, but had to leave that school after a serious car accident.
He is married to the former Sheila Moore. They have one daughter, Moquinada, and a grandchild.
Gooch said that while he is proud to be the first African-American fire chief in the city, it comes down to doing a good job for all the people of Water Valley. “I’m going to take the job one day at a time. We’re going to do the best we can for the citizens.”