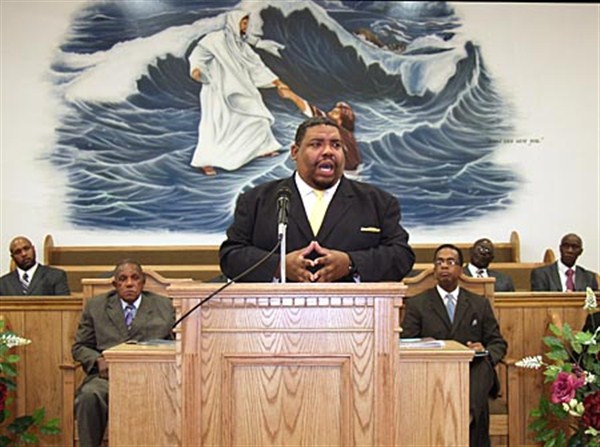 Rev. Gerome Battle was the key speaker at Monday’s Dr. Martin Luther King Jr. celebration. The event was sponsored by the Mt. Moriah District Baptist Association and Yalobusha Chapter of the N.A.A.C.P. – Photos by David Howell 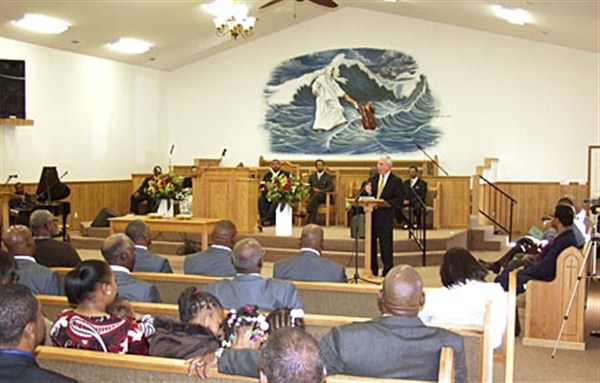 Water Valley School District Superintendent Kim Chrestman was one of the speakers in Monday’s MLK ceremony. Chrestman outlined changes in education, including an emphasis on early childhood education, a tougher curriculum and increasing standards for teachers. 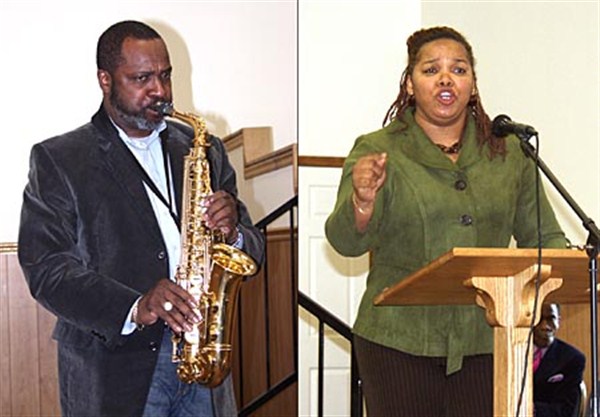 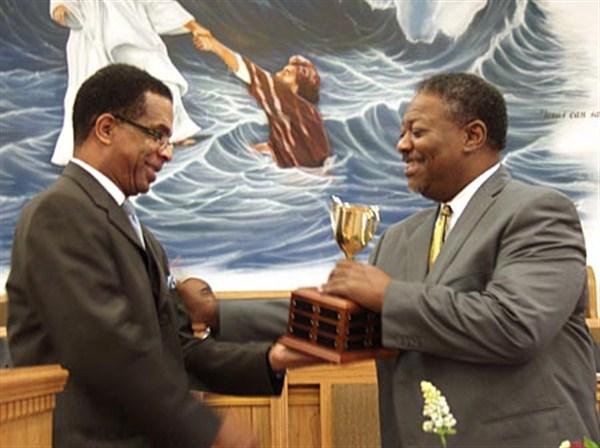 
Blessed are the peacemakers: for they shall be called the children of God.  – Matthew 5:9

COFFEEVILLE –  As many in the nation tuned into the second inauguration of the country’s first African American president, 200-plus people in Yalobusha County honored one man who helped make that possible.
Monday’s event also marked the 30th anniversary of Congress passing holiday legislation in 1983  commemorating Dr. Martin Luther King Jr.  For the attendees at the Martin Luther King Jr. Day outside Coffeeville,  organizers touted the federal holiday as a “day on” rather than a day off. The celebration was sponsored by the Mt. Moriah District Baptist Association and the Yalobusha Chapter of the N.A.A.C.P.
Praising King as a peace maker, the keynote speaker Rev. Gerome Battle, noted that Christ is the ultimate strength in today’s world.
“I’m grateful today that God sent Dr. Martin Luther King, Jr. our way. We have to be careful not to give him (King) all the credit,” said Battle, who pastors Chapel Hill M.B. Church in Water Valley. “We celebrate today the same source of strength that King had,  driving him to higher heights and deeper depths,” Battle continued. “King patterned his life after a man named Jesus.”
Battle, who was born in 1973, said he was a beneficiary of King’s work.
“So many times, Dr. King was criticized for his non-violent approach to hatred and hostility… But if you be still, the Lord will fight your battles.”
Battle urged attendees to follow Dr. King as a peace maker, citing Bible verse Matthew 5:9 as motivation.
“Go into schools, churches and communities and say, what can I do,” Battle added.
He also noted that Mt. Moriah works to cross racial lines, pointing to different races and cultures represented at Monday’s event.
His sermon concluded with praise for Christ, who paid the ultimate sacrifice.

Other speakers
Water Valley School District Superintendent Kim Chrestman also took the podium Monday. Chrestman stressed the important of schools and education in the local community.
“When your school goes, your town and community goes,” Chrestman told attendees.
The superintendent pointed to challenges facing schools across the state and nation. Among these are early intervention, especially for students between the ages of four and eight, where skills taught shape the foundation for the rest of these students’ lives.
Chrestman said state-mandated kindergarten and even pre-school could help reach students at a younger age. He also noted that early childhood education has been a priority identified by President Barack Obama.
Other challenges include increasing standards for teachers, which would strengthen the teaching profession; and a tougher curriculum.
“Education is fixing to get tougher, we need support from families and the home,” Chrestman told the group.
Chrestman also voiced support for a number of Governor Phil Bryant’s education initiatives, including improving literacy skills, early intervention, universal screen to measure students’ learning and improving college and career reading for graduates.
Chrestman also cautioned against  state legislation for charter schools or school choice.
“School choice kills  schools and communities and possibly segregates,” the superintendent explained.
I believe our legislature will pass some type of charter school legislation,” he added.

Coffeeville Native
Retired U.S. Air Force Major  and NASA employee Melissa Lacy followed Chrestman. Lacy, a Coffeeville native, told the group that she was a product of Head Start.
Her topic, “Success Through Preparation,” utilized some of her own life experiences. She enlisted in the Air Force, only after dropping out of the University of Mississippi.
“I did not sit back on my failure,” she explained. “Dreams changed.” She earned a bachelor’s degree, master’s degree and ultimately a PhD while in the Air Force.
As a Desert Storm veteran, she also correlated work experience that made planning vital to success during the war.
At the conclusion of the service, the top three churches with the most members in attendance were recognized. Bethlehem M.B. Church retained the trophy with the most members attending the annual MLK service.