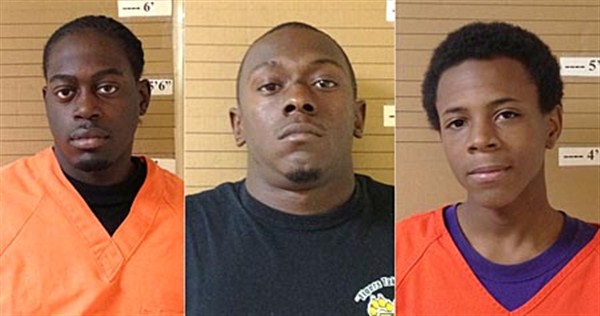 
COFFEEVILLE – The Dollar General store in Coffeeville may have been spared a burglary after good police work led to the arrest of three men who may have targeted it.
Sheriff Lance Humphreys reported three men were arrested after a traffic stop around 2 a.m. Monday morning. They were all wearing black clothes and had tools, including a sledge hammer, that could be used for a burglary.
The men were also wanted in connection with a Forrest County Dollar General burglary and could be linked to others, according to the sheriff.
Humphreys reported that Alonzo Washington, 19, of Jackson; Derrick Davell Francis, 26, of Canton; and Aaron Charles Harris, 27, of Jackson have each been charged with possession of burglary tools by Yalobusha authorities. Humphreys said authorities with Forrest County will transport the men back to that county for an earlier Dollar General burglary.
The trio were  stopped after deputy Thomas West and Constable Brent Anderson first observed a slow-moving car in Coffeeville around 2 a.m. Monday morning. The lawmen followed the car, stopping it as it traveled into Water Valley on Hwy. 7.
Humphreys said the Chevrolet Impala had a switched license plate, and the driver did not have a driver’s license or proof of liability insurance. Humphreys said the loss prevention unit with Dollar General will assist in the investigation.
“There have been over 40 Dollar General break-ins in the state in recent months,” Humphreys explained.
Ironically, one of the suspect’s cell phones had the GPS coordinates for the Dollar General store in Coffeeville keyed in.
But Humphreys said the men will likely be ruled out as suspects in a string of Dollar General burglaries in northeast Mississippi and southwestern Tennessee. Video from several different incidents in those cases show two white men who have knocked out store walls and hooked chains to the store safes..
“But they could be connected to other Dollar General burglaries, including one in Oakland last year,” the sheriff explained.
In an unrelated event, Humphreys reported that Sylva Rena Grocery on Hwy. 32 was broken into Saturday night. Hum-phreys said cash appeared to be the target for the perpetrator.
Surveillance video from the store provided a decent image of the person.
“We hope to get this person identified and make an arrest,” the sheriff reported.