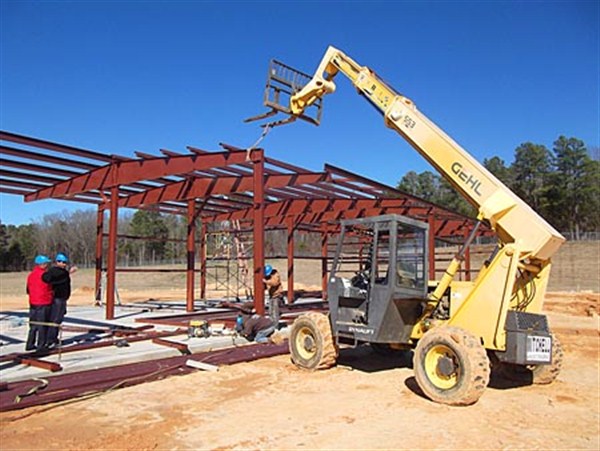 Mayor Larry Hart (left) talks with construction workers on the site of the T-hangar at the municipal airport. The $305,000 project should be completed by spring. 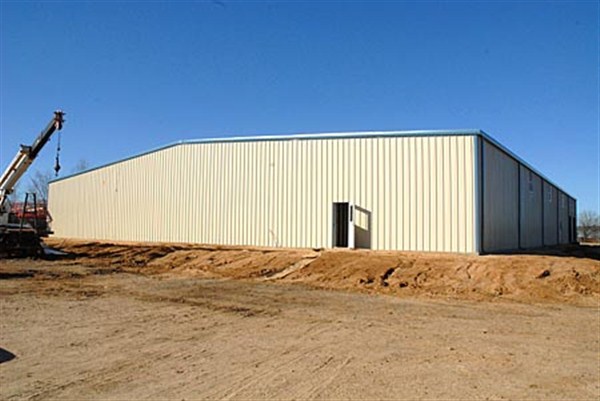 Mayor Larry Hart said that city officials are hoping to have Allied Industries, an industrial filter manufacturer, in their new location by late spring. The building (above and below) is designed so that it can be easily expanded to the north. – Photo by Jack Gurner 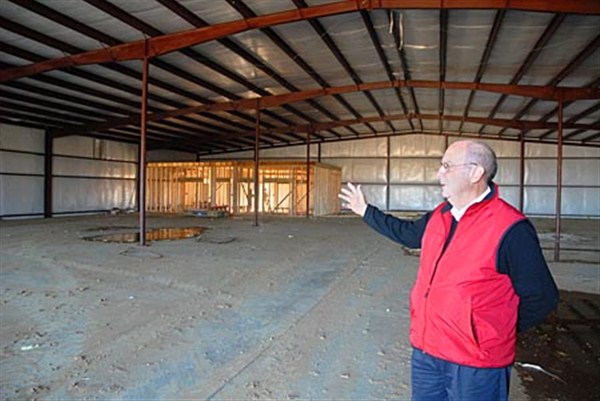 
WATER VALLEY – There’s a lot of things happening in the city, according to Mayor Larry Hart and much of it is being done without additional cost to the tax payers.
“We’ve been able to get a lot of money into our community and that’s what makes things happen,” Hart said during a tour requested by the Herald of the latest two development projects; the T-hangar at the airport and the spec building on the old Bondafoam property.
“We’ve spent several million dollars and the nice thing about that is we’ve been able to do it without any additional cost to the tax base,” the mayor added. “We’ve been real aggressive over the past few years, going out and locating monies through ARC, Mississippi Development Authority, state of Mississippi and federal government.”
At the airport, Hart said that the T-hangar should be completed by spring. “Of course it all depends on the weather, especially this time of year when you’re doing construction.”
The $305,000 project, funded through an FAA grant, requires a ten percent match, which is divided between the city and the Mississippi Department of Transportation. The mayor noted that the city’s portion of the match will be around $15,000 worth of “in-kind” work. All other costs associated with the project including engineering and construction are included in the grant.
“Our plan is to leave another space north of here to expand,” he said. “And, then beyond that we will allow individuals to place buildings.”
The T-hangar design is more economical because less space is required to store aircraft, which are parked in opposite directions. Each has its own secure, private bay.
Hart pointed out that there are two entrances on the south side and two on the north side. “The plane will spin around and you’ll back the tail in first. There will be ample room.”
He continued that the walls would be insulated. “Some T-hangars don’t have insulation, but we believe that will enhance the hangar by having the walls insulated. It does away with a lot of sweating and moisture inside the building.”
Because the hangar is being built in a flood plain, regulations requires that anything you build inside the hangar will have to be up out of the flood plain. “It has to be at an elevated level to be out of the flood plain should this ever flood.”
He explained that a portion of the airport property did flood in 1991 when the runway was under more than a foot of water that extended over the taxiway and a portion of the ramp. “But,” Hart emphasized, “we’ve never known this part to flood.”

Spec Building
“We’re hoping to get our client into this building no later than late spring,” Hart said, referring to Allied Industries, an industrial filter manufacturer. “And, if we can continue to get the movement on it that we have right now, I think we’ll meet that deadline easy enough.”
“Allied was in town the first part of the week and they are very pleased with where we are,” he added. “They are looking forward to moving their total operation here. They’ve been operating a sort of skeleton program down at Coffeeville in that temporary building.”
Hart continued that Allied anticipates being able to grow here in the Water Valley area. “We’re looking forward to that,” he said. “Still looking at 35 to 40 employees and maybe even beyond that.”
The mayor said that the project, being built by a local firm, Goodwin Construction Co. for $384,159, is about 75 percent completed. “The electrical work is going to go real fast. The electrician said that once he moved in, he would not leave until he had it done.”
“We start moving equipment in from up north and after that is completed they’ll start moving some of their equipment from Coffeeville up this way,” Hart added.
The building is designed so that it can easily be expanded to the north. “We still have several acres back behind this site.” The mayor continued. “In talking with Allied, they think expansion is a real possibility once they get everything lined out and moving.”

Other Projects
“We’ve got the Allied spec building going. We’ve got the airport hangars in process. We have just completed refurbishing three of our four major above ground water tanks that supply our city with drinking water,” Hart said. “In just a few weeks we’ll be starting a $600,000 major sewer renovation in town. Ninety percent of that money will come from other sources rather than our tax base. To a community of some 3000 people, that’s big money.”
“We’re seeing our job base grow. At last report our unemployment is at about the state level. That’s down several percentage points from where we were a year or so ago.”
Hart also complimented the city’s current industries, BorgWarner and Water Valley Poultry, which are part of Water Valley’s growth. “When you stop and think about it, we’ve got a lot of things happening in our community.”